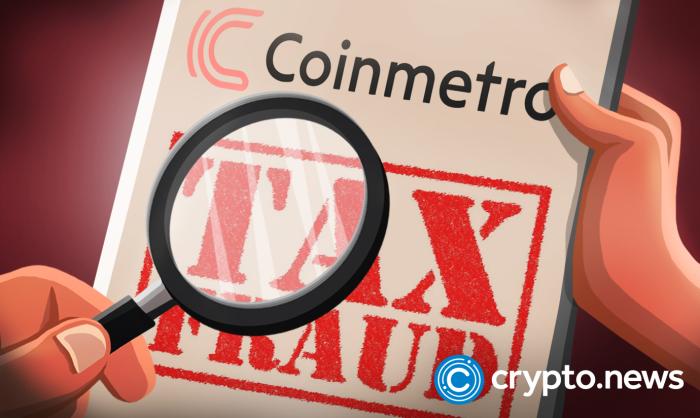 According to the Estonia Tax Administration Board, CoinMetro, an exchange with thousands of customers, might have committed tax fraud. However, the financial regulator is yet to prove their findings, with the case now lying in the hands of the court. The court allowed the confiscation of the company’s tax accounts, which spells concerns for the company.

CoinMetro was established in 2017 by Kevin Murcko. He found the Estonian e-state and entrepreneurial culture fascinating, which prompted him to register his company within the region. Right now, the startup faces trouble following severe charges from the Estonia Tax Administration Board, who gave the court a reason to seize CoinMetro’s capital amounting to 100K Euros.

The Tax Board found some discrepancies in CoinMetro’s tax filings after auditing the startup’s records for the first three months of 2022. According to recent reports, their findings show that CoinMetro filed input tax, a record they were not obliged to submit. Instead, the company left out an income tax liability sum undeclared, which allegedly helped them to evade paying 100K+ Euros in taxes.

According to the court order filed by the tax board, their accounts on the taxing front had what they described as ‘strange in the eyes’, with records that were ‘sloppy.’ The suspicious account tax filings led the Estonian financial regulator to believe that the exchange could have been engaging in tax fraud. Nonetheless, Murcko has expressed no concern whatsoever and is somewhat calm about the allegations.

Kevin Murcko’s Activities on the Spotlight

The query about how the company gets the revenue to run its intra-day activities posed a riddle to the Estonian Tax and Administration Board. When CoinMetro’s superiors were asked where their capital comes from, they didn’t give a clear picture of how income is generated in the company.

The popular exchange, being at the center stage of the Estonian crypto business, does not own any payment accounts in banks across the country. When discovering how funds are received in the company, the board uncovered a VIBAN bank account used, whose owner isn’t on the tax regulator’s name list. A VIBAN account operates in such a way that the bank it lies in has no direct access to the details of transactions made by the account’s owner. The conditional banking situation has drawn the interest of money launderers and tax evaders.

The Estonian tax board has taken its plea to court but has not yet provided concrete proof of the exchange’s tax evasion case.