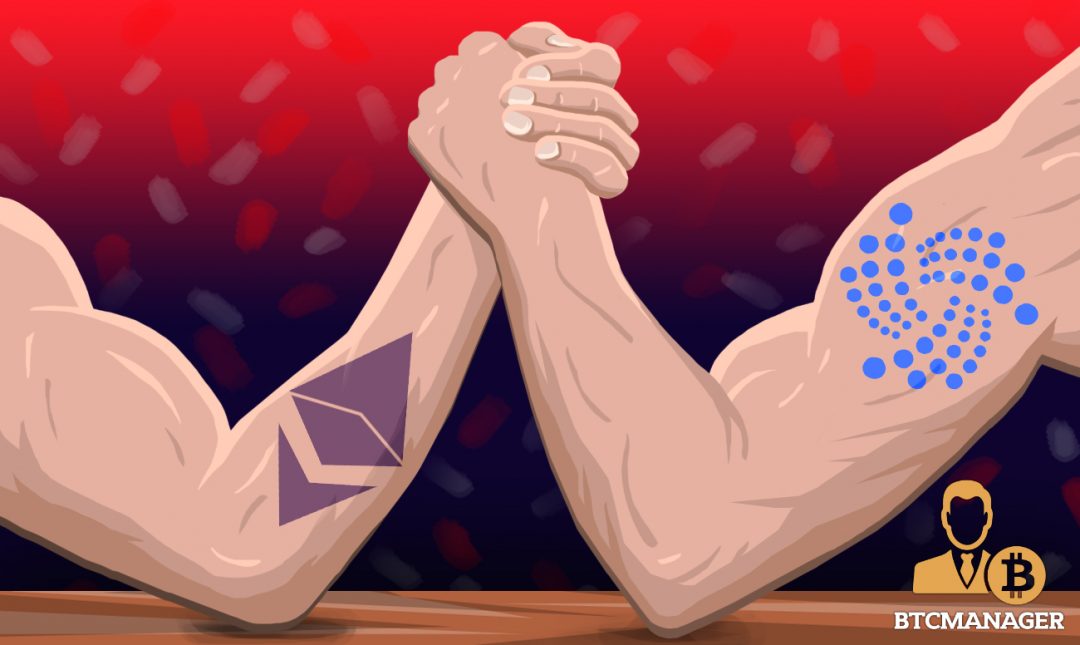 Though both fall within the cryptocurrency bracket, Ethereum and IOTA are vastly different technologies. Ethereum operates upon their blockchain while IOTA has attempted to go beyond the block and use a different system based on what they call the “Tangle, a version of the DAG protocols.

The Future of Two Protocols

This difference is seen by some as a deciding factor for the future of cryptocurrencies in general and, due to the importance of its nature, has started a bit of a feud between the heads of Ethereum and IOTA via twitter.

This started back in September when one of the core developers of Ethereum, Nick Johnson, wrote a piece describing his issues with IOTA. He raised points such as IOTA’s use of non-binary logic in a binary computing world and went so far as to call them a “bad player” on the open source scene.

However, just a couple months later, a partnership between IOTA, Cisco, Volkswagen, Microsoft, Fujitsu, and Samsung to name a few, has formed to create a data marketplace. The news caused a few twitter I-told-you-so’s to be directed at Nick Johnson bringing up his article.

When this so-called rivalry first started it was pretty low-key and relegated mostly to disagreements between developers, however as of this announcement the founder of Ethereum, Vitalik Buterin, has jumped in giving a fairly hostile statement regarding Microsoft and these big companies endorsing IOTA.

So, you're saying Omkar Naik (blockchain specialist) is incompetent, because he thinks that Iota technology will go beyond blockchain?

IOTA, for the most part, has stayed out of the fray and allowed their followers to do the talking for them. However, they did recently take part in a Q & A Session at The Next Web where a number of the questions revolved around their thoughts on Ethereum and the difference between the two technologies.

For the most part, their digs at Ethereum were quite civil, but a question raised by a TNW user brought their real thoughts on the crypto to the surface. The user speculated on IOTA’s claims to take care of problems that Ethereum could not as well as if Ethereum’s solutions are genuinely viable.

David Sønstebø, IOTA’s founder, responded with a bit of technological venom in kind to this question:

“I do not believe Ethereum can solve the same problems, simply because in order to do so they would have to revamp their entire architecture to the point where it would no longer be Ethereum, and I don’t think the miners or eventually stakers would ever vote ‘yes’ on a proposal to kill their profits after their heavy investments. Ethereum is an interesting project, but they have a tendency to make very lavish claims and never deliver on deadlines. Hofstadter’s law needs to be kept in mind, of course, it’s hard to deliver on time, but Ethereum isn’t even PoS yet.”

For the rest of the interview, they remained adamant about their Tangle’s improvements over current blockchain technologies, and seem to have sound reasoning to back up their statements.

The full interview is available here for those attempting to hedge their bets on which technology will be right. At the current rate, it seems like there might not be enough room for both of these techs in the existing ecosystem.