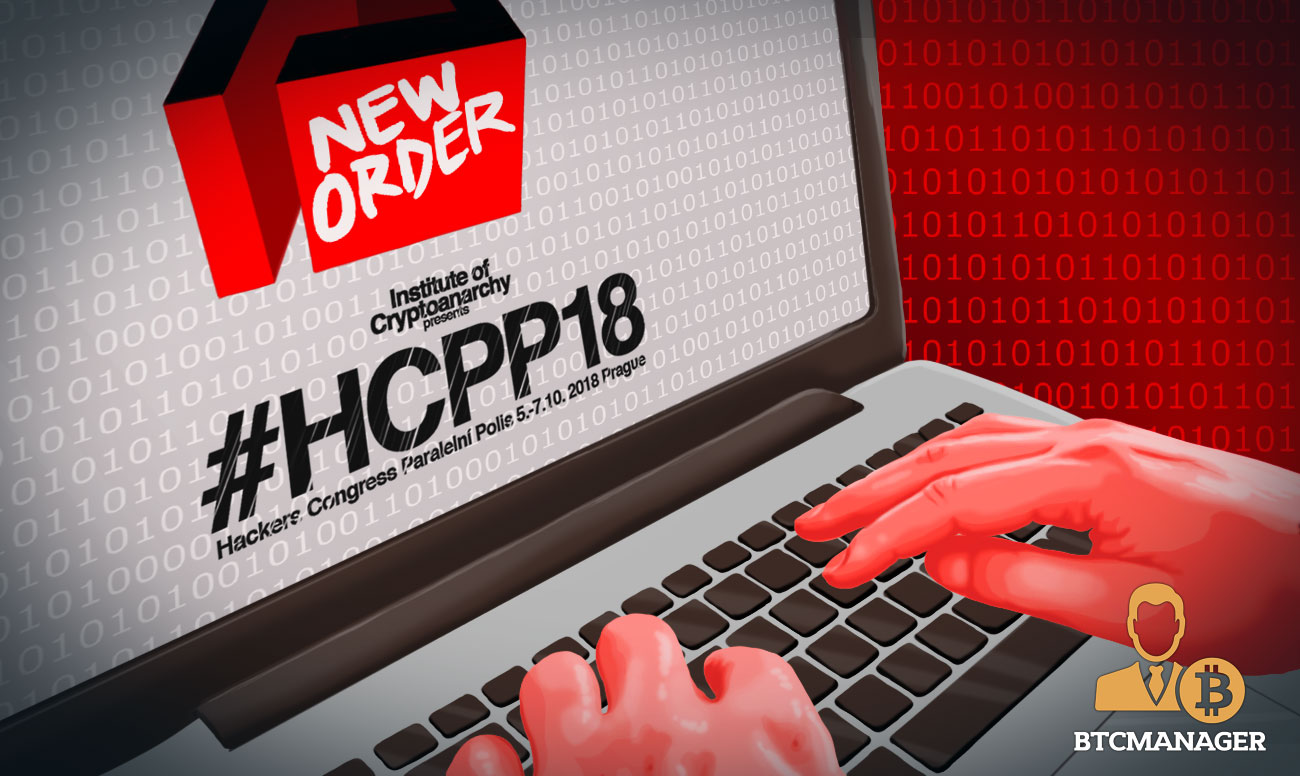 Day two of The Hackers Congress continued to shed light on the liberty fighting technologies emerging from decentralization. Naturally, observers recognize Bitcoin as the king of both freedom and innovation, but there are many other means (and reasons) for dismantling centralized structures. From the presentations, spectators gained a better insight into how a headless organization with nodes scattered across a network is a shining example of anti-fragility.

For a quick recap of the first day’s presentation, BTCManager curated a mix of content here.

How Do you Pronounce Anonymous?

Privacy has been a major talking point in nearly all the presentations. The rise of crypto honeypots and massive data centers have posed their fair share of problems for both the individual and communities at large. Now, as these problems enter the political realm and folks like Mark Zuckerberg bumble their way through Congress, it’s clear that real solutions for flesh-and-bone individuals likely won’t be granted readily; many will just have to take it. The question then arises as to which resolution should be taken seriously.

In a panel discussion, Peter Todd, binaryFate, and Arno Pfefferling spoke on the technical realities of privacy developments in Bitcoin, Monero, and Horizen/Zencash. As a touch point, the three were also invited to speak on the need for fungibility in the surveillance state that is becoming much of the world’s financial system. zK-Snarks, Ring Signatures, and the arrival of MimbleWimble on Bitcoin’s horizon all attempt to resolve extreme transparency in different ways.

Todd even championed the privacy features of the Lightning Network, especially regarding its non-sticky way of routing transactions. Ultimately, the developer concluded that programmers build “a boring coin that works and then solve privacy on the second layer.”

Easier said than done, but not without its merit. As Japan is already pressuring companies to kick privacy coins off of exchanges and traditional services like MasterCard and Visa still viciously collecting data on our every transaction, we may need to cut the fat (and shitcoins?) and start fighting transparency with privacy, like, yesterday.

Joerg Platzer Is back from his Recon Mission

The owner of Room77 in Berlin, Germany reported on his observations from formal institutions on cryptocurrencies. “Things are good and bad,” explained Platzer. “On the one hand I know central bankers who have bitcoin because they’re not stupid, but on the other, we’re seeing the same things that we didn’t like in traditional finance appearing in Bitcoin.”

His comparisons came from a previous talk he gave at HCPP back in 2014 in which Platzer explained the general inability of financial authorities to grok the technology. As the narrative changes, however, cryptocurrencies (at least bitcoin) is under threat of being eaten up and spit out into an ETF (or worse). “Coinbase is literally a bank. And using custodial services defeats the purpose of what Bitcoin was meant to do in the first place,” he continued.

Despite the criticism, it’s likely that institutional investors are already hooked on the crypto bug and developments may be too late to hit the reverse button. The ravenous cheering of this unconditioned adoption is even more frightening. It seems like every day in which observers witness the sell and rally following any banking authorities crypto-related announcement. To that Platzer added:

“Mass adoption my ass. I would rather see bitcoin drop in its price on exchange rates than see it being used in these kinds of conditions.”

In the end, the real observations that will need to be made will be those following groups who are pro-centralization and those who are not. For a short list of the bad guys, check out who signed the New York Agreement back in 2017.

Time-Expiring Encryption and Starfish (or Spiders)

In light of recent regulations in New Zealand, The Real Smuggler was back to present a novel solution. For the uninitiated, legislation in the country with more sheep than people states that the border patrol now has the right to search, decrypt, and go through travelers digital affairs (aka “digital strip search”). If not, those entering are obliged to pay a $5,000 fine. Fortunately, there’s a third solution: Cypherlock.

It was nice visiting New Zealand twice. Pity I won't be going back… In today's society this kind of orwellian bullshit is unacceptable. https://t.co/9PIZAJHK8T

The software relies on an oracle, ratchet algorithms, and a bit of ingenuity. “You can’t ever tell border patrol what your passwords are if you don’t actually know what they are,” explained Smuggler. Cypherlock builds a hashed secret of a secret (think Inception for encryption) of which has an “expiry” that destroys the secret following a specified period. It also comes with features that allow for the encryption of multiple secrets and the ability to extend the expiry time of the secret. But that doesn’t prevent oppressive regimes from still leveraging all valuable means of coercion (i.e., removing all your fingernails). Buyer beware is perhaps the modus operandi. Better yet, forget that international vacation all together.

After protecting the individual from being squashed by The Man, how do groups sustain themselves in the face of an oppressor? In history, according to Austin Craig, there have been two solutions: Centralized vs. Decentralized (Or Spiders vs. Starfish). Readers can likely guess which has been (at least as of late) more successful.

A primary example can be seen in the splintering of Islamic extremist groups. Craig drew from sources that outlined how the post-2001, head-on attack against terrorism in the middle east has lead to a multi-headed hydra of violence. Even after the metaphoric beheading of Osama Bin-Laden, terrorist events have seen an uptick in their efficacy. Quickly, the ideology backing many cryptocurrencies takes on a light previously unimagined.

Decentralization Is Long on Communitarianism

The final speaker on the day’s events brought the high-level cryptographic pontification to the front steps of the humans it would eventually serve. Noted Libertarian thinker and author of The Freeman’s Perspective Paul Rosenberg explained how a decentralized, minimal-state economy would treat it’s sick and disabled. “People will look after each other, like they always have, just better, ” explained Rosenberg.

“And that money that is being taken from us by the government could be reused to call a contractor to fix up the attic. Which would mean having one more room for grandma to stay in or the neighbor whose husband just passed away.”

At current, the hierarchical conception of government alienates us from our fellow man. It prevents the nourishing relationships that stimulate a community and a rewarding life, says Rosenberg. By eliminating these linear mechanisms that connect individuals (usually one-directionally), communities form in which each member manifestly picks up those in need and spreads resources more effectively. Acting locally, ideally without Big Brother’s permission, would inevitably serve groups better than the pyramid of power in place at the moment.

The libertarian response to wealth distribution, according to Rosenberg, has found an imperfect, albeit “better,” home in the tenets of decentralization. And from afar, it makes a whole lot of warm, fuzzy sense, especially for grandma.

Stay tuned for the final round up of The Hackers Congress Paralelní Polis tomorrow.