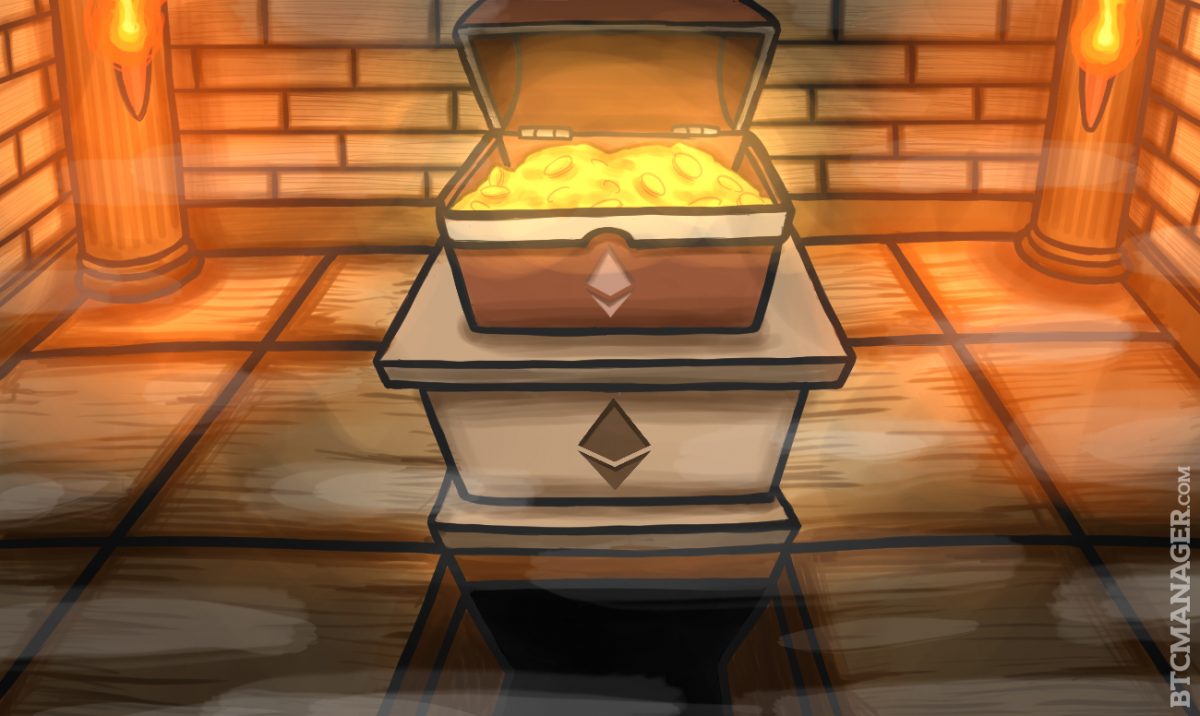 Since the bitcoin ‘gold rush’ of 2013, when the price rallied from $126 to over $1,100 from early October to late November, cryptocurrencies have become a very popular investment for more ‘adventurous’ investors. Due to the relative infancy of cryptocurrencies, including bitcoin, they are subject to tremendous volatility compared to the majority of fiat currencies and traditional asset classes such as stocks or bonds.

However, volatility creates profit-making opportunities and with the maturation of cryptocurrency exchanges investors are looking at other cryptocurrencies than bitcoin to potentially generate a lucrative investment income. One such cryptocurrency is Ethereum’s ether, which has gained the second largest market capitalization of all cryptocurrencies in a relatively short time.

Ethereum is a decentralized platform that runs smart contracts, which are applications that run exactly as programmed without the possibility of downtime, censorship, fraud or third party interference. Ethereum has been specifically created for developers to create their own applications that can represent ownership or the movement of value from one party to another. Furthermore, it allows if-then type smart contracts to be coded onto the blockchain to create irrefutable terms for contractual agreements.

The potential use for this technology is vast and it has the potential to disrupt the status quo of a wide range of industries. Smart contracts can be created on the Ethereum blockchain to represent ownership of financial securities, deeds, intellectual property and agreements of any sort in a secure and decentralized manner.

What is Ether (ETH)?

The ticker ETH represents the chain which has implemented a hard fork to reverse the DAO hack. The alternative to ETH, post hard fork, is Ethereum Classic which has the ticker ETC and runs on the old, pre-hard fork Ethereum blockchain as if the DAO hack did not happen, upholding the mantra ‘code is law’.

Ether also differs from bitcoin in the way it is created. The supply of ether is determined as follows. The first batch of ether was created as part of a crowdfunding effort in 2014. This presale of ether has created 60 million ethers for the contributors of the presale and 12 million went to the Ethereum development fund, which includes early contributors and developers. Furthermore, 5 ethers are created for every block mined according to the Ethereum website. Therefore, the initial supply of ether was 72 million. However, the supply of ether is not fixed. Up to 18 million ethers can be created per year.

Having said that, the supply constraints are subject to change as a new consensus algorithm, called Casper, is being worked on which is expected to require less mining power. Therefore, an increase in supply is very much possible. This will very likely play a key role in the future price levels of ether.

Ether is now supported by major exchanges such as CoinBase’s GDAX enabling investors to purchase ether with fiat currency or bitcoin. This allows easy access for new investors keen on entering the ether market, which should increase trading volumes going forward.  Furthermore, a new company named EtherIndex LLC has filed paperwork with the Securities Exchange Commission for the launch of an ether exchange traded fund (ETF).

Exchange-traded funds allow investors to indirectly invest in an underlying asset, such as a basket of stocks or bonds, a commodity, real estate and soon also a range of cryptocurrencies. This would tempt investors into ether that would not have otherwise invested due to concerns around safe storage and related concerns. Should the ether ETF prove to become popular among investors, ether would see a massive boost as the ETF issuer needs to purchase ether every time someone buys shares in the ETF.

The Price Development of Ether

Due to the anonymity of cryptocurrency wallets, it is very difficult to say where demand for a particular cryptocurrency is coming from and it is even harder to predict where the price of a cryptocurrency will go. Many speculators have entered the cryptocurrency market with the intention of making a ‘quick buck’. Price developments in cryptocurrencies, including ether, often tend to correlate with media coverage and public interest, which can be tracked via Google Trends.

Comparing the chart of ETH-USD below and Google searches for the keyword ‘Ethereum’, a very clear positive correlation is apparent. 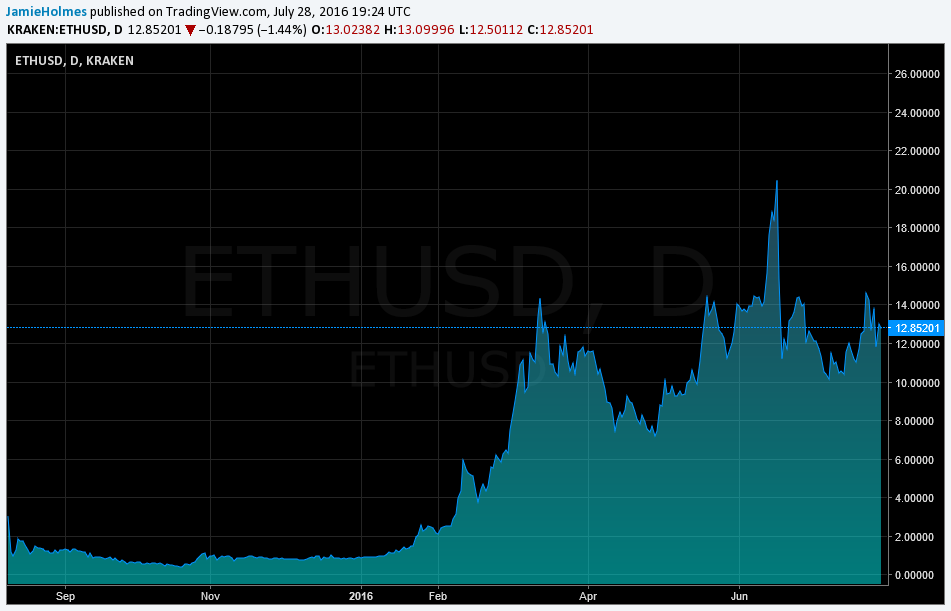 The price of ether has seen substantial volatility since it first became tradable in August 2015. It saw a steep rally in Q1 2016 going from under $1 to surpassing $10 per ether in early March. Ether hit its current peak in April at $21.50, at which point the DAO was hacked and $50 million worth of ether was stolen.

This lead to a crash that almost halved the price of ether within hours and since then the price of ether has oscillated in the $10-$15 range. The combined value of ETH and ETC has been stable going forward whereas the philosophically opposed components are individually still highly volatile in the fallout of the hard-fork.

Should You Invest in Ether?

The argument for investing in ether is pretty straightforward while the risks involved are more complex.

Ether has become the second largest cryptocurrency within a rather short period of time, which is a testament to the Ethereum network’s viability as one of the most important blockchains (and technologies) of the future. Since ether can now be bought purely on a speculative basis via cryptocurrency exchanges, new investors will likely to enter the ether market pushing up the price as Ethereum becomes more mainstream and receives more media attention.

Even though the Ethereum blockchain has split in two, the original ETH has the support of the core developers and general community. This is highlighted by a post by Ethereum founder Vitalik Buterin:

“…we can see from several sources (including exchange order books, but also public pronouncements from Barry Silbert et al) that incoming interest into ETC is actually coming from the bitcoin side even more than it is from the ethereum side.”

Moreover, David Seaman argues that the current dominant chain, ETH, represents future productive value as Ethereum Classic does not have the developers or connections behind it that ETH possesses.

If you want to invest in ether it should be with the belief that the Ethereum project will succeed and will play a major role in technology and industry in the future. The more the Ethereum blockchain will be used to create smart contracts and decentralized apps (or dapps), the more the price of ether should increase. Some exciting dapps are being built on the Ethereum blockchain, such as AKASHA, a promising next generation social media network.

However, there are several risks involved when buying ether as a speculative cryptocurrency investment. Firstly, the Ethereum network is prone to cyber attacks, as witnessed in the DAO theft last June, which resulted in a crash in ether’s price from $21.50 to $15 within hours of the news surfacing. Secondly, the supply of ether is not fixed and its future supply restraints are still uncertain. The price of any asset is driven by supply and demand. Hence, uncertainty of an assets supply creates substantial risk for investors. Thirdly, as ether is not a currency in the traditional sense it cannot be used to buy goods and services. Hence, its value is tied to the success of Ethereum. And fourthly, there is the possibility that the Ethereum network could be replaced by a superior blockchain technology with similar features. This would inevitably result in a crash in the value of ether with an unlikely price recovery.

The author holds a small amount of ether and my approach to ether as an investment is very simple. The author considers it a high-risk, high-reward long-term punt on a technology that the author believes will play a major role in many industries in the future. However, the author is fully comfortable with losing the entire invested amount.