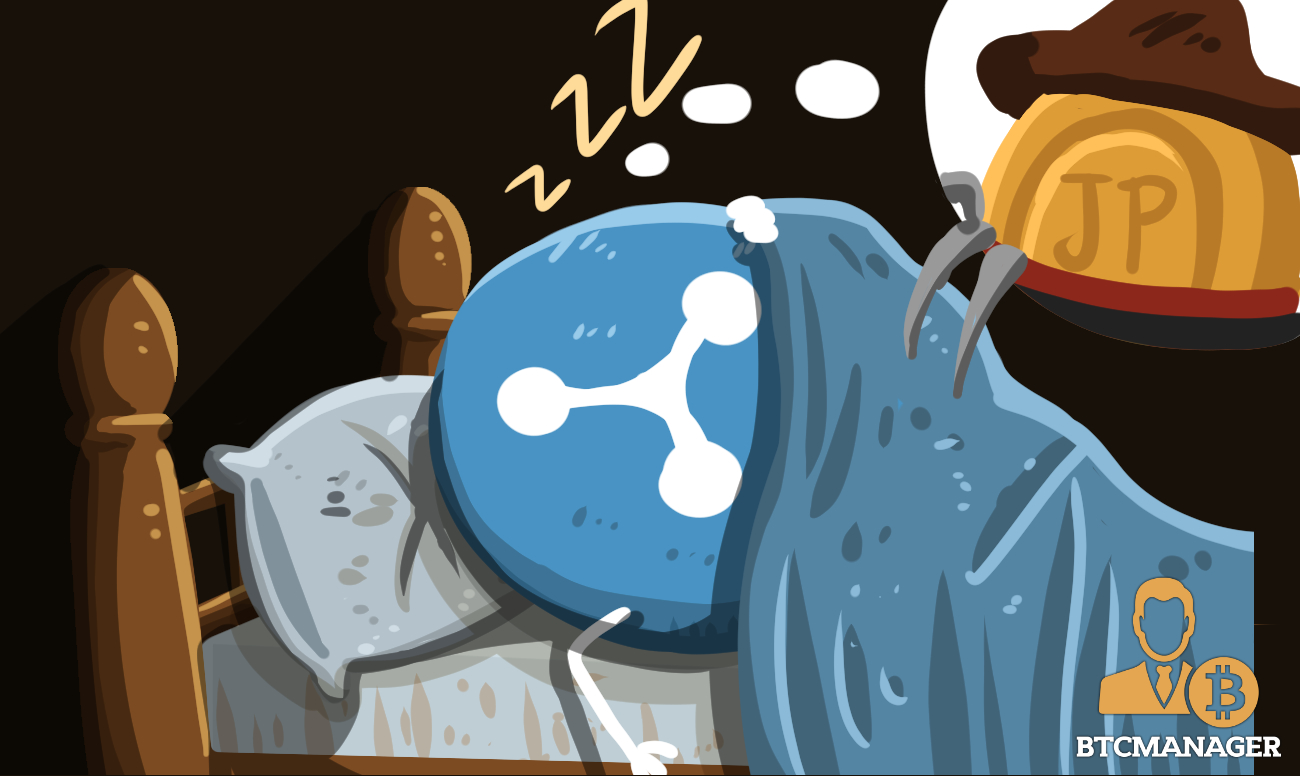 JP Morgan, one of the worlds largest banks, made a surprising move to get into the digital currency space by creating JPM coin, which would be used to settle transactions between clients of its wholesale payments business instantly.

The news brought a shock to the crypto space due to the bank’s strong stance against Bitcoin in the past. In September 2017, CEO Jamie Dimon once referred to Bitcoin as a “fraud that will eventually blow up.” Then only four months later, he changed his opinion and regretted calling Bitcoin a fraud, stating, “the blockchain is real.”

While the emergence of JPM coin is positive news for the banks, one cryptocurrency, in particular, has to be feeling the pressure.

Ripple’s single purpose as a company is to develop a private ledger that allows bank partners to settle transactions faster using XRP. The best-case scenario for Ripple would have been for JP Morgan to announce that they had become one of the 200 bank partners currently working with Ripple. Instead, JP Morgan chose to develop its cryptocurrency.

Now, Ripple finds itself competing with a century-old financial institution with $2.5 trillion in assets and a customer base that includes 80 percent of the companies in the Fortune 500.

Why the Sudden Turn to Crypto?

In many ways, one could argue that the case for banks adopting cryptocurrencies is even more enticing than for regular users. Under the traditional financial system, banks deal with various operating costs that make it incredibly difficult to achieve and maintain profitability. Many of these operating bank costs end up being passed onto consumers in the form of high transfer fees.

Among these many operating costs are the costs of KYC compliance. It’s been reported that major financial institutions can spend up to $500 million annually on such processes and customer due-diligence, according to Thomson Reuters.

These costs can be significantly reduced by implementing a shared ledger in which information relating to the identity of bank participants are securely exchanged between banks and clearinghouses, eliminating the need for redundant ID verification processes.

Banks not only have to deal with costs in the form of money spent but also in the way of time wasted and revenue opportunities missed (otherwise known as opportunity costs). Everyone who has a bank account knows about the terrible experience of having to wait three to five business days to receive their money. This delay is due to all banks in the U.S. having to use the same clearinghouses for ACH (automatic clearing house) transactions: the EPN or Federal Reserve.

Processing time is, therefore, the same for all banks. ACH works as an overnight batch system and functions only on business days. So if one were to send money to someone on a Wednesday through their your ank, the recipient would have to wait until at least Monday before receiving the funds.

While the customer experiences this business day delay as an inconvenience, the banks experience it as an opportunity cost. Imagine how many more transactions could be made if each transaction only took a few minutes to settle, as opposed to three to five business days? How much more money could the bank make in fees? How much could the customer save if banks decided to lower their fees because using a distributed ledger could significantly reduce their operating costs?

These are the type of questions that executives at JP Morgan were likely pondering as they were evaluating whether to adopt blockchain technology.

JPM coin will exist on a shared ledger, which means that the funds can be transferred and settled between parties on the ledger within a few minutes to a maximum of a few hours. The processing costs for each transaction will also be significantly lowered because of the blockchain infrastructure ensuring transparency, security, and immutability for all operations.

A Threat to Ripple’s XRP

JPM coin seems to offer the same value proposition as XRP. The primary difference is that JPM coin has a much bigger brand name amongst banks and major companies, plus their cryptocurrency is a stablecoin, meaning it is pegged to USD.

The reason why having a stablecoin is such an advantage is because it removes the risk of losing money during the transaction process following unexpected price volatility. Banks are highly risk-averse entities, and so the last thing they want is to transact billions of dollars a day using a currency that can easily fluctuate by five percent or more in a single day.

The same concern also applies to businesses that may want to accept cryptocurrency payments. No company wants to deal with the headache of not knowing whether they will make a five percent profit or a ten percent loss all because of volatility. Stablecoins give businesses and financial institutions all the benefits of a cryptocurrency (transaction speed, transparency, and security on the blockchain) without the downsides of volatility.

Although cryptocurrencies with larger market caps tend to be less volatile than smaller capped ones, XRP’s market cap of $13.2 billion is too small to withstand the kind of volatility to attract significant financial institutions in the same way as JPMorgan’s offering.

Despite the looming threat to their business, Ripple seems to be unfazed. The company has signed 200 partner banks and is ranked third on CoinMarketCap with a $13.2 billion market cap at the time of press.

Ripple CEO, Brad Garlinghouse has tweeted that JPM project “misses the point” and that  “introducing a closed network today is like launching AOL after Netscape’s IPO. 2 years later, and bank coins still aren’t the answer.”

Ultimately, it only makes sense that Ripple should try to publicly differentiate itself from JPM Coin, especially as some investors may start to feel concerned about the companies ability to directly compete with such a significant financial institution.

However, the irony is not lost on those in the crypto space who recognize that XRP and JPM Coin are two sides of the same coin: Centralized cryptocurrencies operating in closed networks with no intention of ever achieving Satoshi Nakamoto’s vision of a decentralized peer to peer cash system.