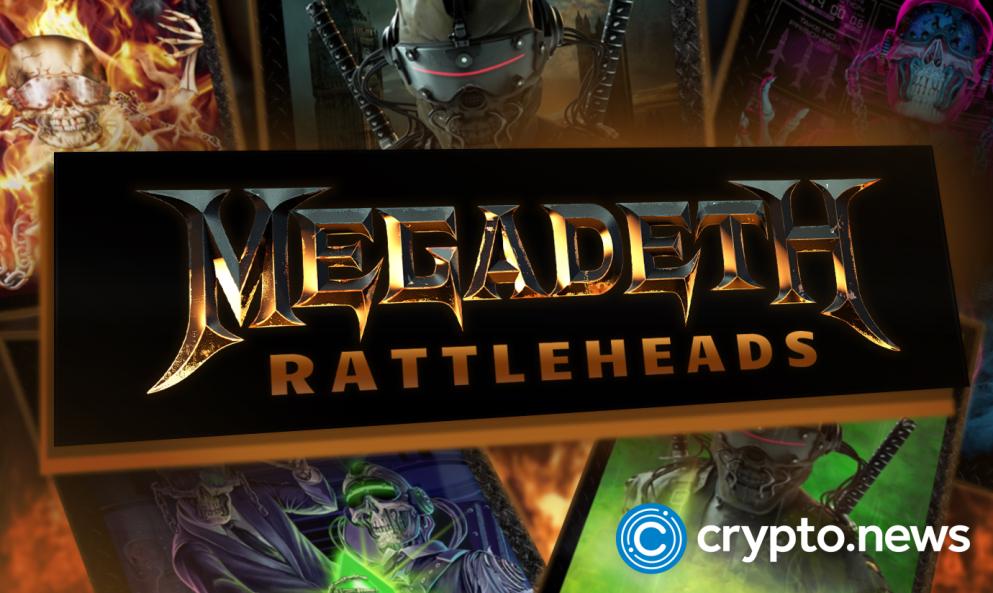 Megadeth, a legendary thrash metal band, has launched an NFT collection that marks its entrance into the web3 sector. The “Rattleheads” collection, named after Vic Rattlehead, the band’s mascot, celebrates their illustrious four-decade-long career by utilizing generative imagery and themes.

Vic Rattlehead, Megadeth’s mascot, is a skeletal character in a suit. It represents the slogan “See no evil, hear no evil, say no evil,” as well as a censoring emblem.

Also, its ears have metal caps on them, its mouth is locked shut, and its eyes are protected by a glued visor.

Meanwhile, the web3 community has welcomed another new member, Megadeth. The band, which has been performing for the past 40 years, has launched its generative NFT collection, dubbed “Rattleheads.”

Upper Echelon Studios and Five to One Collective created the collection. However, their fan club, Cyber Army, provided the art content for the collection.

The collection includes classic imagery and themes of the band’s 40 years of history. Besides, Megadeth is among the most popular metal bands across the globe.

According to the frontman of the music group, Dave Mustaine, he has been working hard to ensure the band takes the top spot. He added that their first album marked their rise into stardom.

Mustaine noted that they became the first music band to open a website. Hence, they have always been interested in new technology. Moreover, the band’s album in 2016, Dystopia, had a whole VR experience.

Mustaine added that the entrance of web3 tech is a massive opportunity for the band to connect with their fans. The group’s latest album sold about 48,000 copies in the United States.

This figure was just during the first week of sales. Also, it ranked number three on Billboard’s 200 charts.

With the recent development, the music band Megadeth is the latest music group to enter the NFT market. At the beginning of this year, Pharrell Williams, the famous singer, emerged as Doodles’ chief brand officer.

Doodles is a popular NFT project that has grown massively. Earlier this week, the project hit a valuation of over $704 million. This was after it raised $54 million in a refund funding round.

Brands Continue to Bet On The NFT Sector Despite Market Crisis

Meanwhile, the NFT industry has witnessed a massive fall in 2022. This is due mainly to a massive sell-off in the entire crypto market.

However, several brands and companies continue to invest in the market, including the NFT sector. The sector has witnessed massive patronage from popular figures like Eminem, Snoop Dogg, and others.