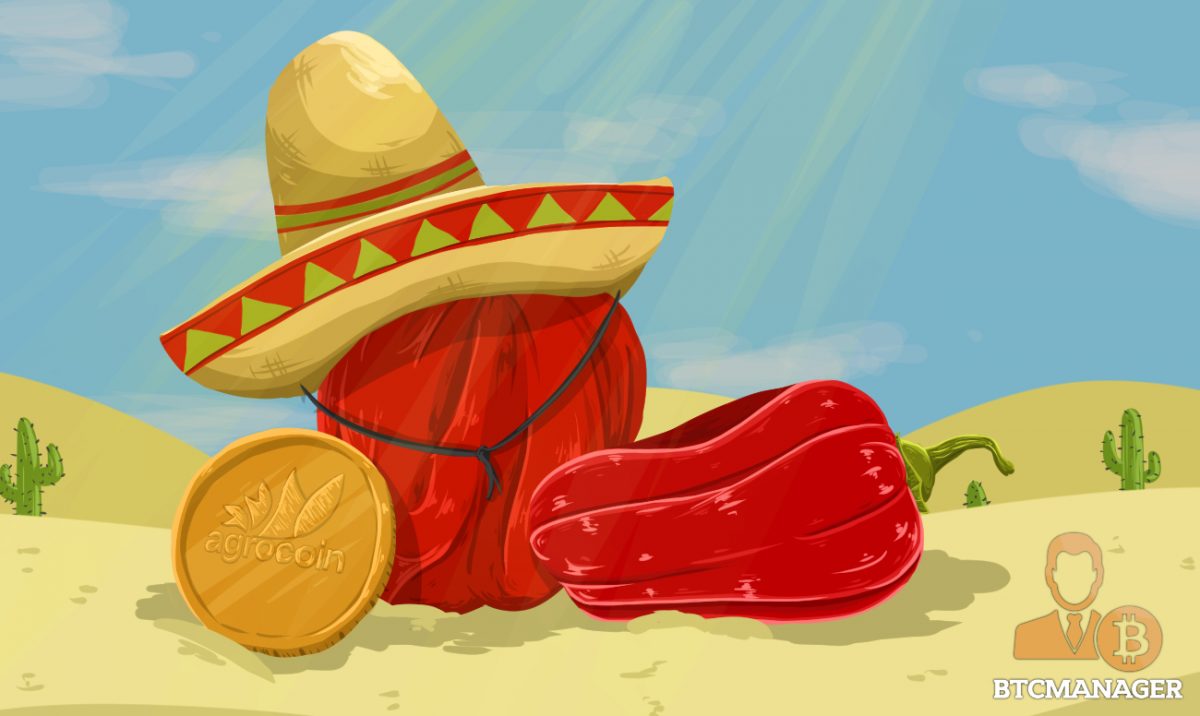 Agrocoin is a cryptocurrency launched by Mexican-based Amar Hidroponia on September 2017, with the aim of offering small investors a viable opportunity to invest in one of the world’s hottest chilis; the habanero chili.

Although habanero chili plants grow in many parts of Mexico, they have a special feature; they support the value of a cryptocurrency. Every 500 peso ($27) of Agrocoin is backed by the hydroponic production of a square meter of habanero chili in Leona Vicario a municipality located in the state of Quintana Roo.

The profits obtained from the sale of chilies will be distributed equally among the investors depending on the square meters they have. A yield of up to 60 tons per hectare is foreseen, that is an equivalent of 6 kilograms per square meter.

According to Pablo Arteaga Vega, general director of Agrocoin, the objective of this cryptocurrency is to offer the general public the possibility of investing in a profitable cryptocurrency, which provides a yield of up to 30 percent per year.

The large, bright and smooth habanero chili achieves better prices in foreign markets while the smaller chili is sold in the national markets. This combination allows an average of 70 pesos per kilo. They point out that 80 percent of their production is exported to the United States, while 20 percent sold in the domestic market.

The Amar Hidroponía company currently has five hectares of hydroponic habanero chili to backup agrocoin; however, they have the ability to expand their terrain and increase the support of agrocoin.

Agrocoins can be purchased via the company’s website, and on cryptocurrency exchange platform after a year-long lockup period. So far the company has sold 50,000 of the one million it intends to issue. The habanero plant is productive after four months of life and will continue to produce for eight more months, and investors cannot withdraw their money while the harvest continues in that period. The harvests are weekly and quantities of up to two tons per hectare per week are expected.

Arteaga Vega pointed out that although cryptocurrencies are synonymous with volatility, with agrocoin, there is some stability because the habanero peppers which backs the currency, has a stable price in the market and demand which mainly exists in the United States is consistent.

The director also noted that agrocoin is oriented towards investment and not to speculation as it is with other currencies such as bitcoin, which has registered a significant loss of its value so far this 2018.

Agrocoin Will Adhere To The Fintech Law

In a statement, Arteaga Vega mentions that agrocoin would adhere to the FinTech Law, which is a law regulating financial technology companies.

The bill underpinning the FinTech Law, which seeks to promote financial stability and prevent money laundering, was approved by Mexico’s Senate in December 2017 and now awaits the signature of Mexico’s president Enrique Pena Nieto.

Arteaga Vega claims that agrocoin is the first cryptocurrency supported by a productive asset in the agro-industrial sector in Mexico and possibly the world and foresees significant success in the nearer future.