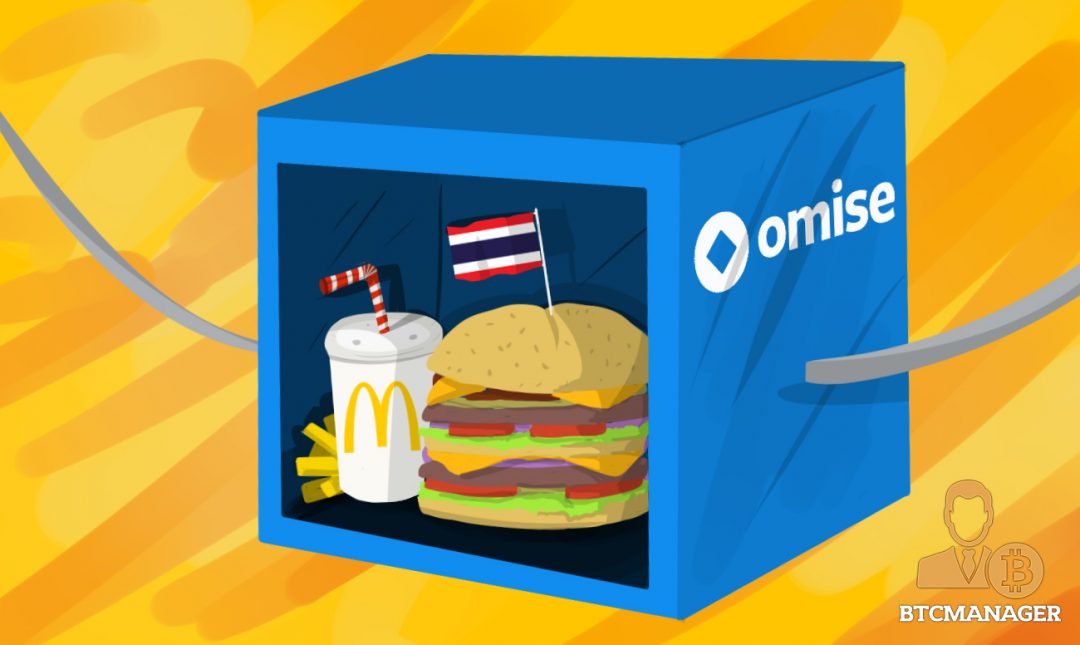 Omise, the Ethereum-based payment gateway infrastructure provider, has entered into a strategic partnership with McDonald’s Thailand to implement its exclusive payments gateway onto www.mcdonalds.co.th and the McDelivery Thailand mobile app.

Since 2013, Omise has been collaborating with local financial institutions, banks, and fintech service providers in Thailand and Japan to create a cross-bank and cross-network blockchain-based financial platform. After launching Alipay Thailand and its payment gateway, the Omise development team secured $25 million in the ICO of OmiseGo, to power its payment gateway platform.

With Omise, users can process transactions on various platforms including Alipay, Visa, Mastercard, and JCB networks, in addition to local internet banking platforms of Thai banks.

Why are Major Conglomerates Partnering With Omise?

During early September, Omise revealed that it has come closer to securing a deal with Google’s Thailand subsidiary and on September 25, the Omise development team was selected to power the financial network of McDonald’s Thailand.

For large-scale conglomerates with multi-billion dollar operations, it is vital to integrate financial networks that do not impose hidden fees and that are transparent. The Omise network charges a flat 3.65 percent transaction fee to its clients and partner companies, without setup costs, monthly fees, and minimum commitment. As a result, companies like McDonald’s Thailand have instinctively geared toward Omise over traditional banking systems and other fintech service providers, due to its simplicity.

“The consumer’s experience begins right when they place the order online, and payments is a critical component of that experience. Offering highly secure, seamless payment options across all platforms and devices is key to delivering a seamless experience for McDonald’s customers. Omise’s platform provides a smoother consumer journey because of its seamless checkout process which increases conversion rates for businesses.”

Omise also secured an undisclosed investment from Thai commercial bank Krungsri (Bank of Ayudhya), after raising $25 million in its initial coin offering (ICO) and $20 million from venture capital firms. TechCrunch reported that Krungsri is a part of the Mitsubishi UFJ Financial Group (MUFG), a Japanese financial conglomerate actively involved in the digital currency space. Through its partnership and investment from Krungsri, Omise is expected to receive a significant amount of resources, capital, and connections from major financial institutions in Thailand and Japan.

Upon the closure of the investment from Krungsri, Hasegawa added:

“We’re excited to leverage our new partners and this capital to continue to build our OMG platform, which we believe will facilitate the future of open payments and value exchange, and scale our operations into countries across the Asia Pacific region.”

Recently, CNBC revealed that consumers in the US had spent over $15 billion in hidden bank fees in 2016 alone. According to NerdWallet’s analysis of CFPB data, an average US bank customer has also spent over $442 in wasted and unnecessary transaction fees.

For businesses, especially large-scale conglomerates, the integration of robust and efficient financial systems is a challenge, primarily due to the implementation process. Banks charge a significant amount of fees up front as set up payments and also require companies to pay large monthly maintenance fees. With Omise and most Ethereum-based fintech service providers, it is possible to be flexible with payments and the integration process because they already operate a cross-platform payment gateway.

More to that, companies are relieved from security responsibilities, as Omise is a PCI DSS certified payment service provider in Thailand. Through Omise, McDonald’s Thailand can be assured that the card data and personal information of users are kept secure.

“We continue to raise the bar for our customers with convenience for web and mobile ordering as Omise consolidates the payment by all card issuers with ease.”

The adoption of Omise as a blockchain-based payment gateway by major conglomerates including McDonald’s and Google will further spur interest and demand for ether and cryptocurrencies in general. In the upcoming months, subsequent to the integration of scaling solutions such as Plasma and the Metropolis hard fork on the Ethereum protocol, it is likely to see an increase in large-scale companies integrating Ethereum-based decentralized applications.