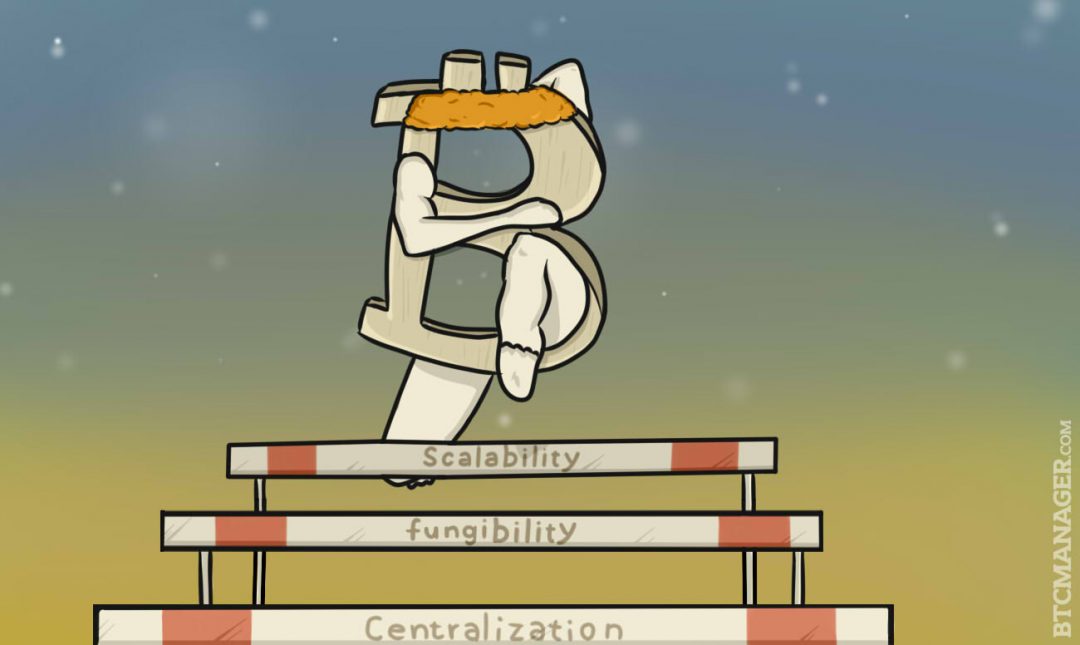 Bitcoin entered the New Year with a bull run reaching a peak around the $1140 level, briefly reaching parity with gold before crashing 30 percent, and recovering to around the $900 mark. For Bitcoin to continue growing regarding adoption, use, and consequently price, it must overcome the following hurdles; namely, centralization, fungibility, and scalability.

More than ever, the problems of the high concentration in the structure of Bitcoin mining and addressing scalability issues must be handled by the community. With every price uptrend, more users become introduced to the Bitcoin ecosystem, leading to more people utilizing Bitcoin on a daily basis.

Simply put, if the Bitcoin network cannot supply the increased throughput to handle the flow of transactions that will only continue to become more frequent as time passes, Bitcoin provides little-staying power in retaining users. Not only must it accomplish this, but it must do so quickly and securely as well.

On the centralization side of things, AntPool, F2Pool, BitFury, and BW.com are responsible for almost 56 percent of the network’s hash rate. With such a concentration of miners, this makes everything from double spends on unconfirmed transactions, censoring which transactions make it into the blockchain, as well as the infamous 50 percent attack potentially possible. However, there is no evidence of these issues occurring as of yet. ‘Rusty Russell,’ in his “What’s Worrying/Exciting Me About Bitcoin: 2017 Edition” Medium Post said:

“In most systems, there are economies of scale which drive centralization, and bitcoin mining is no exception. As block sizes increased, the situation became worse: if your block is slow to get out to the other miners, it’s likely to lose a race, and if you’re slow to get blocks from other miners, you’re more likely to produce obsolete blocks. Blocks which lose out like this are called “orphan blocks,” and how often you produce them is your “orphan rate.” More than 1 percent and your profitability is probably shot.”

Lastly, the privacy of transactions is a topic that is becoming more and more scrutinized as well. In specific, fungibility, in Bitcoin’s case meaning that one Bitcoin is no different from another, and a user can spend them as they see fit. This problem is unique as if it is not quickly addressed, not only will users turn away from Bitcoin, but they have a plethora of privacy-centric cryptocurrencies vying to take Bitcoin’s place, most notably DASH, Monero, and Zcash.

Russell continues, “The state of fungibility in bitcoin today is poor. Services exist which aim to trace where bitcoins came from and whose they are. The fact that the movement of coins is entirely transparent means some services are obliged to do so, and they refuse to interact with coins they see as ‘tainted.’”

While the above issues do plague Bitcoin currently, changes all over have and continue to be implemented. Bitcoin Unlimited continues to be a strong contender for solving many of the scalability problems Bitcoin faces, but integrations such as libsecp256k1, Segregated Witness, and Schnorr signatures will help buy time until Bitcoin miners can come to a consensus.

Other solutions such as Tumblebit, the Lightning Network, and Mimblewimble will also ease some of the struggle Bitcoin is experiencing. While Tumblebit looks to improve privacy as a protocol, the other two strive to be off-chain transaction solutions, another avenue of exploration.

ValueShuffle is also another protocol worth mentioning. This technique looks to improve on privacy and fungibility by not only providing an effective way of mixing bitcoin but utilizing private transactions, developed by Blockstream to hide the amount in each transaction while still allowing nodes to verify the bitcoin sent matches bitcoin received.

The SPECTRE protocol as well as the MIT project named Solidus have also arisen in response to the problems facing Bitcoin. By ditching the blockchain and utilizing a DAG structure, the SPECTRE protocol looks to increase block creation rates to several blocks per second, increasing confirmation times as well. On the other hand, Solidus addresses the problem of ‘selfish mining’ and slow transaction times. ‘Selfish mining’ refers to a situation in which a miner causes the orphan rate (probability of a miner or pool creating an obsolete block) to gain an advantage over others.

With all these solutions in work, the road map for Bitcoin in 2017 looks to be a productive one, full of improvements making the cryptocurrency more accessible and usable than ever before.