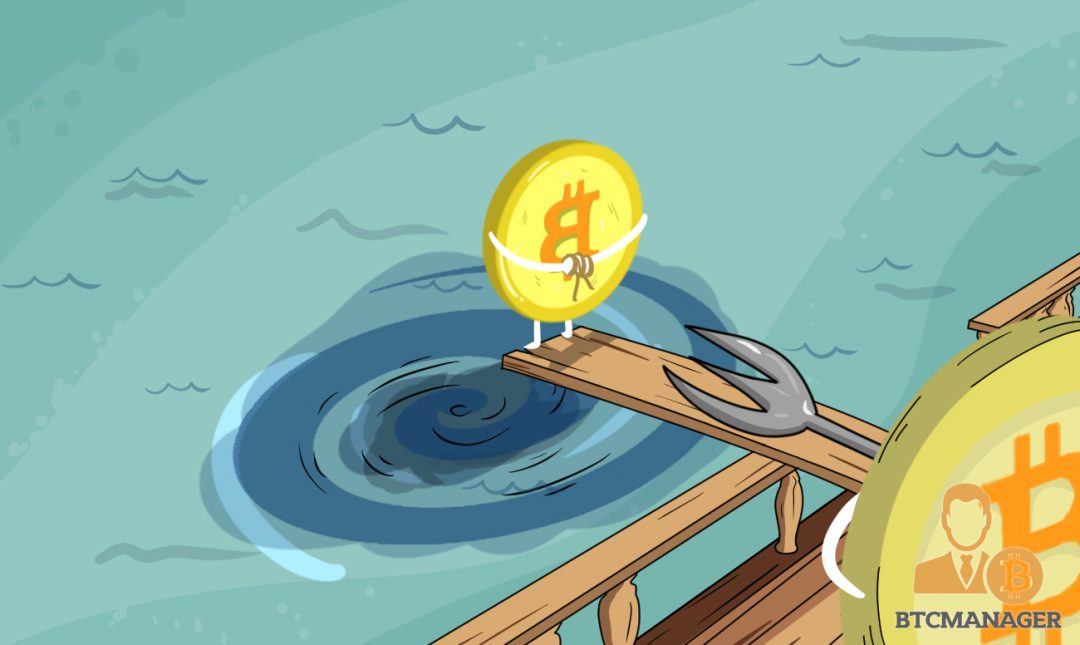 On August 1, the Bitcoin network will split with the emergence of Bitcoin Cash (BCH). This article will outline the choices you have if you hold bitcoin and some potential outcomes of the split.

What is Bitcoin Cash?

The project’s website states that Bitcoin Cash is peer-to-peer electronic cash for the Internet. It is ‘fully decentralized, with no central bank and requires no trusted third party to operate.’ Bitcoin Cash is aiming to be a cryptocurrency that focuses on transactional capacity.

Most within the Bitcoin community did not see this coming; a User-activated Hard Fork (UAHF) was initially supposed to be used as a backup plan if the UASF were to activate on August 1. However, on July 22, Bitcoin Cash announced its plan to hard fork anyway.

“…all hard forks present two risks: replay and wipeout attacks. Wipeout is not as much of a risk since this is a permanent fork. Replay attack protection is provided as part of the Bitcoin Cash release.”

Bitcoin Cash will appeal to users who do not agree with SegWit and since recent events show that most miners signalled BIP 91, and hence their intention to signal SegWit, the hard fork will ease community infighting as the two sides with opposing perspectives can now go their separate ways. Also, Bitcoin Cash aims to overcome one problem that the community has not been able to reach consensus on, namely, raising the block size limit.

Bitcoin Cash will offer a larger block size of 8MB, compared to Bitcoin’s 1MB. Also, it will adjust the proof-of-work difficulty quick than the normal 2016 block adjustment interval in Bitcoin, which means in the case of a low and dropping hash rate, the difficulty of Bitcoin Cash will adjust relatively quicker; this has the consequence of making sure the Bitcoin Cash chain remains viable.

There is also added confusion surrounding the ticker of Bitcoin Cash, with most referring to it as BCC. Here in this article, we use Kraken’s ticker to refer to Bitcoin Cash, that is BCH.

The split of Bitcoin Cash from the main Bitcoin network is not without precedent; most likely, the fork will fall to the wayside as with previous forks like BitcoinXT, BitcoinDark, and BitcoinClassic.

What are the Options for Bitcoiners on August 1?

The first block of Bitcoin Cash is anticipated on August 1, 2017, 12:20 UTC. Given you control your private keys, you will have the same amount of BTC and BCH after the hard fork. Futures markets on ViaBTC estimate the value of BCH to be around 0.127 bitcoin or $344.58 at the time of writing, falling in value from around $550 just a few days ago. However, it is important to make clear that the futures market for BCH is likely to be highly illiquid and manipulated by those with a vested interest in BCH.

If you own bitcoin and it is held by an exchange or third party storage provider, then there is a chance you may not receive the BCH that is due to you. Given the surprise announcement, many exchanges do not have the time to adjust to the changing landscape. For example, exchanges such as Coinbase and Bitstamp will not be crediting customer’s accounts with Bitcoin Cash.

Bitstamp, the first fully licensed bitcoin exchange in the EU, stated, “As always, the safety of our customers’ funds remains our number one priority. To this end, as a security precaution, we will be disabling bitcoin deposits and withdrawals on 31 July 2017 at 23:00 hrs UTC to ensure that all BTC funds stored at Bitstamp remain secure. Trading will remain unaffected throughout. Deposits and withdrawals will be resumed only when we deem it safe and prudent to do so.”

“We will leave it to our customers to decide whether to withdraw their BTC funds from Bitstamp prior to this cut-off date if they would like to access BCC or any other hard fork, and Bitstamp shall not be held liable for any consequences of that decision, from neither a financial, operational nor regulatory standpoint.”

On the other hand, many exchanges will support Bitcoin Cash and will credit customers balances with an equal amount according to their bitcoin holdings.

For instance, Kraken will credit customer balances with BCH and funding will be disabled and reenabled once the outcome of the fork is clear and the network is safe. Interestingly, margin trading will still be enabled and those with margin long positions on bitcoin will result in a BCH credit, whereas short margin positions will lead to a BCH debit. Kraken also warned traders of the consequences of holding margin positions through a period of such uncertainty:

“Margin traders are advised to be very cautious across the fork, by either reducing their position sizes or closing out entirely before the fork. In addition to the special provisions described above, margin traders should plan for the possibility of extreme volatility and unfavorable forced liquidations surrounding the fork. As always, margin traders are strongly encouraged to set stops rather than rely on perfect accessibility to the exchange.”

Bittrex also announced their support for BCH in recent days:

“If you have a Bitcoin (BTC) balance on Bittrex during the BCC UAHF time on August 1st, 5:20am (12:20pm UTC), you will be additionally credited the equivalent amount of Bitcoin Cash (BCC) on a 1:1 basis. i.e. 1 BTC on Bittrex held during the on-exchange snapshot will get you 1 BCC.”

Hardware wallets Trezor and Ledger will also give their users the chance to access Bitcoin Cash; you will be able to send BCH from the hardware wallets to any of the exchanges suporting BCH, like Bittrex and Kraken, to swap for bitcoin. Most Bitcoin exchanges in Asia are also taking the position that BCH is an altcoin or new blockchain asset, where Bithumb, BTCChina, Huobi, Korbit, and OKCoin are all supporting BCH.

Other providers will automatically sell BCH and credit their users with bitcoin automatically, making it easier for unsophisticated investors. For instance, Xapo and Bitrefill are two companies in the space that are planning to take this course of action:

A word of warning; many in the Bitcoin community are wary of ‘splitting services’ that may be offered in the aftermath of the hard fork; they will claim to split your bitcoin for you so you can receive the equivalent amount in BCH, if you did not do so already. It is advised you check these providers very carefully, as many of these splitting services are likely to be scams, and hold your bitcoin with wallets or exchanges that are supporting BCH.

The Fallout of the Hard Fork

Much of the lasting impact depends on many questions, which are as of yet, unanswered. How much hash power will each chain command? What will the price ratio between BTC and BCH be? More importantly, how will this affect the SegWit2x plan? If Bitcoin manages to get rid of 2MB hard fork part of SegWit2x, then Bitcoin Cash may be worth holding for a few months. On the other hand, it may be best to liquidate BCH and convert into bitcoin or some altcoins.

But there is no such thing as a free lunch. As Coinmetrics.io creator Nic Carter emphasizes, the dampening of the network effect due to the split may reduce the overall value of both networks in the short run:

“Let’s pessimistically say that BCH could seize 15 percent of the userbase from BTC. If the Metcalfe property held, this would decrease Bitcoin’s marketcap by 27.75 percent, taking the price from $2730 to $1972. In this simulation, BCH would be worth $61.4 with 15 percent of the users. So a 85/15 split destroys 25.5 percent of the value of the original network. Put into other words, while BTC owners would received a cash “dividend” from the BCH airdrop (assuming they sold immediately), the money gained from this dividend is outweighed by the network value destroyed. In fact, any split whatsoever is a value-destroying activity in the short term, no matter the ultimate ratio of BTC to BCH.” 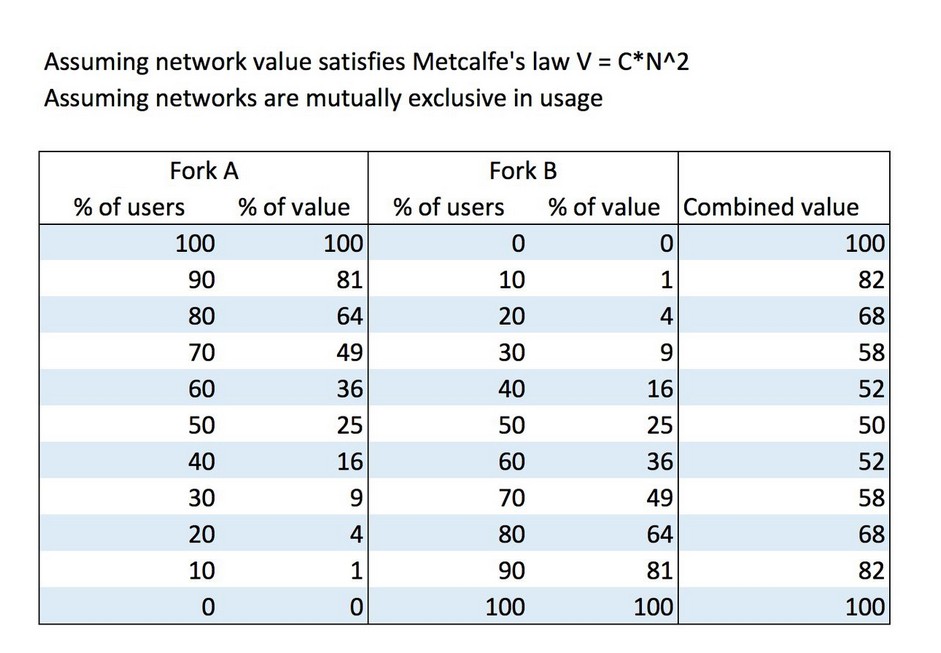 But there is also the ‘value unlock’ mechanism to account for, which was observed with the ETH/ETC split. Because a split will rally the Bitcoin community behind one cause, Bitcoin can quickly build a small block solution while Bitcoin Cash can work toward an on-chain scaling solution. Similarly, the split in the Ethereum community allowed infighting to cease and two groups to move forward with their respective visions. Therefore, the value unlocked from the divergence may outweigh the value lost as a result of the reduction in the size of the Bitcoin network.

It may be optimal to hold BTC and BCH over the long term, taking the ETH/ETC split as a precedent, until the dust settles and there is more certainty about the path going forward. But on August 1, one thing will be evident; BCH will either dump under immense selling pressure or it will live to fight another day. If the second scenario transpires, then that might be a good signal to hold BCH and see what the future holds, as the ‘value unlocking’ of the split may become a driving force for both coins to gain in value until it is clear one of them can present a superior scaling solution.