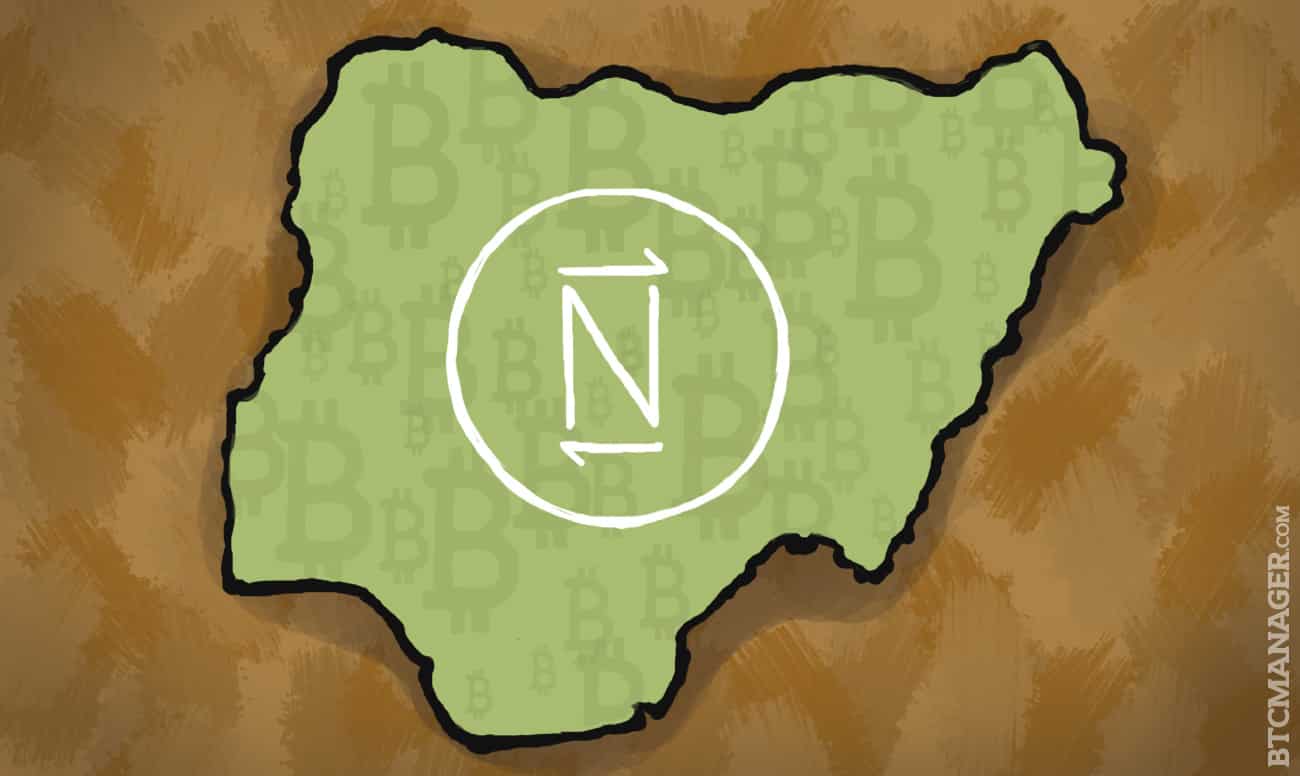 The interest in Bitcoin explodes in Africa’s biggest economy. The government cripples the regular remittance industry and remains unable to stop the devaluation of the domestic currency, the Nigerian naira. But shady investments and the famous Nigerian ‘princes’ might play a role; which is why the central bank has partially banned Bitcoin.

For months Nigeria has taken the lead in Google Trends for Bitcoin. At the end of August 2016 the search volume in the West African country ramped up; in September, it exploded and reached a high in January 2017. The most searched phrases center around buying bitcoin (‘Buy Bitcoin,’ ‘Bitcoin exchange’) or getting bitcoin by mining or for free.

While the whole of Nigeria seems to have only one Bitcoin node, in the metropolis of Lagos – which is the only enduring African node outside South Africa – there appears to be active trading in most cities via LocalBitcoins, which lists thousands of traders all over the country. Nevertheless, by city, Lagos is top for Bitcoin searches on Google Trends, with more than three times as many searches compared to the global financial capital of London and almost twice as many searches as the tech hub of San Francisco.

Besides this Nigeria has two Bitcoin exchanges, Nairaex and Nairaswitch. Nairaex told BTCManager that there is an increasing interest in Bitcoin, “Bitcoin activities has increased significantly in past six months with over 1000 percent increase in monthly volume.”

So, the trading activity in the country is exploding. The big question, this article aims to explore, is: why?

To find out, BTCManager reached out to sources in Nigeria. Exchange Nairaex sponsors the blog btc.ng; the editor Aleppo explains what causes the interest in Bitcoin:

“The predominant use of bitcoin and digital currencies has been for remittances across borders. Remittances have also helped increase bitcoin popularity with a significant chunk of laborers and workers originating in Nigeria working in sub-Saharan countries such as South Africa and the UAE.”

The time of the explosion of interest – August and September 2016 – is no accident, but coincides with a new policy of the country regarding remittances. It is as if you can read political events from the charts.

In Nigeria, remittances are quite a big deal. In 2014, the Nigerian diaspora numbered 17.5 million, sending home around $21 billion, representing 6.7 percent of the country’s economic activity.

Remittances are not only an important source of income for many Nigerians but also a source of revenue for remittance countries. Cash services like the Western Union charge high fees, which is why most Nigerians living abroad have turned to online services, which are far cheaper.

In August 2016, however, the Central Bank of Nigeria changed the rules in a highly anti-competitive way. It released new license rules, which have been strongly in favor of large enterprises. As btc.ng explains:

“With only three companies – Western Union, MoneyGram, and Ria able to continue operations, Nigerians in the diaspora are stuck with the high fees associated with these Money transfer operators. [Oligopolistic behavior] poses a huge concern to Nigerians home and abroad who like to move money across international borders.”

However, by the end of August 2016, the CBN reversed its decision, releasing less stringent guidelines and issuing licenses to more remittance services. But in September 2016, the genie had already left the bottle. The interest in Bitcoin has awakened. As btc.ng puts it:

“With bitcoin, we no longer have to worry about the local and international regulations that plague international money transfers to and from Nigeria, since it allows you to send any amount, any time, to any part of the World in almost less than FIVE minutes, at virtually no cost.”

While FinTech startups might be able to outcompete Bitcoin on the big markets, like the remittance corridors from the US or the UK to Nigeria, cryptocurrency has the huge advantage in that it also reaches places like South Africa or Saudi Arabia. Beyond remittances, Bitcoin can be helpful for Nigerians to build trade connections with other African economies.

These transactional properties are only one side of the digital coin. Like in most cases, the interest in bitcoin is also a result of its quality as a store of value.

Let’s again listen to Aleppos, explaining the reasons Nigerians are interested in Bitcoin:

“Financial security. The naira has become too volatile over the past year due to falling oil prices and economic instability; bitcoin has provided many with a stable and safe alternative asset.”

Nigeria’s economic history is interesting, but also tragic. With a GDP of around $500 billion, strong growth, around 8 percent annually, and an influx of billions of foreign investment every year. With these properties, Nigeria should be poised to be a fast-growing hub for African industries.

On the other hand, a lot of things have gone wrong, with the country in the middle of a severe crisis. A central problem seems to lie with the money. As Aleppo says, the naira has become volatile. One reason for the decline of the naira is the collapse of the oil price. Nigeria is Africa’s biggest producer of crude oil and a top ten oil producer worldwide. The rapid fall in the value of ‘black gold,’ which lost up to two third between 2014 and 2016, hit the country badly.

But this is not the whole story. A more important factor, perhaps, for the devaluation of the naira is due to capital flight. In February 2015, Nigerian Magazine Vanguardngr wrote: “In a survey of payments made by the CBN on behalf of the public, a total of $22.1billion went out of the country in five weeks, an average of $4.5 billion a week.” As for most African countries, capital flight is a severe problem. It happens in a broad scope of industries, and according to estimations, it deprives the country of a significant chunk of the GDP.

A paper about the economic impact of capital flights on the economy of Nigeria, published in 2012, explained the effects on exchange rates: “The constant demand for foreign currency, especially the US dollar, resulting from capital outflow tends to put pressure on the exchange rate.” In short; capital flight increases the demand for dollars and thus devalues the naira.

In recent years the government strengthened the efforts to fight capital flight by restricting monetary flows, resulting in the banning of some financial corridors and instruments. Consultancy ICEF noted in early 2016 that “the Nigerian government has added study abroad to a growing list of expenditures for which it will no longer provide foreign exchange from the central bank. This means that Nigerian parents can no longer purchase foreign currency through official bank channels in Nigeria to pay international school fees.”

Since 2015, the CNB “has been expanding currency controls when it published a list of 40 types of transactions (rice, cement, and many others) that would no longer be eligible to access foreign exchange in the official Nigerian Forex market. Later in the year, it curtailed the use of foreign currency-denominated Nigerian bank cards. And, in December 2015, the CBN also moved to completely ban the use of naira-denominated Nigerian bank debit cards for overseas transactions or withdrawals.”

While the capital flight continues to weaken the exchange rate of the naira, the measurements of the government against it threaten the international trade in and out of Nigeria and limit the usability of the naira and other monetary instruments. Like every restriction of the international transfer of money, it becomes itself a reason to use bitcoin.

But that is not all. Not better are the actions the government takes to stabilize the naira: The central bank pegs the price of the naira to the dollar. In March 2015, it decided that 197 to 199 naira per dollar shall be the ‘true’ exchange rate. The government restricts importation of several products and shuts down the interbank market to enforce it, resulting in a lack of liquidity in forex markets.

During 2016, the gap between the official rate and the black market rate widened. In March 2016, the unofficial dollar price reached 300 nairas. Then in June, the CBN lifted the official rate to around 300 Nairas per dollar, while the black market rate, however, peaked at 500 nairas later on. Nigeria’s annual inflation rate stood at 18.5 percent in October 2016 and is likely to rise slightly above 20 percent by March 2017, according to Abuja-based Time Economics Ltd.

The government gave the central bank more power to control capital flows, to enforce official exchange rates, and prevent dollars from leaving the country. A proposed law threatens a two-year jail sentence to anybody holding dollars as cash for more than 30 days.

In these circumstances, bitcoin has become a tool for the people to defend against the devaluation of the currency, driven by corruption and incompetence on the part of the government.

It is not a fact Bitcoin fans want to hear, but all over the world bitcoin is used for Cybercrime. And there are few nations in the world which are as famous for crime and corruption than Nigeria. KnowYourCountry notes:

And while Nigeria has become the country with the highest rate of internet usage in Africa, ‘cybercrime’ is also flourishing, “Cybercriminals increasingly use more sophisticated techniques, such as e-mail hacking, intrusions, and the use of social media… Nigerian criminal enterprises are often adept at evading detection and subverting international and domestic law enforcement efforts.”

With such a blooming landscape of crime, it is no wonder that the laundering of money in Nigeria “takes many forms; wire transfers to offshore banks; political party and campaign financing; deposits into foreign bank accounts. The abuse of professional services, such as lawyers, accountants, and investment advisers. Reselling imported goods, such as luxury or used cars, textiles, and consumer electronics purchased with illicit funds.”

As the government of Nigeria tries to fight corruption and crime, and the CBN takes the fight to money laundering and capital flight, it becomes possible that the Nigerian ‘princes’ and criminals start using bitcoin for international transactions and money laundering. But who knows?

What is known is this; the pyramid scheme MMM has gained traction in Nigeria. Btc.ng writes, “The MMM Nigeria project has been a long-running scheme operating on an international scale. Accumulating over 3 million users in Nigeria alone, it is one of the biggest operations of its kind.”

MMM Nigeria suggests and incentivizes its users to pay with bitcoin. On its website, it even explains how to buy bitcoin in Nigeria.

These criminal use cases – or the possibility of them – alarmed the central bank. On January 19, btc.ng reported that the central bank “has officially outlawed digital currency as financial institutions especially banks.” The CBN cited reasons like money laundering and terror financing to prohibit banks to use, hold, or transact virtual currencies, and they should ensure “existing customers that are virtual currency traders, have effective AML/CFT controls.”

Btc.ng called this “a significant setback for the adoption of Bitcoin,” but remains optimistic. “Alternative methods such as online exchanges will provide an option for those wanting to purchase cryptocurrencies. Furthermore, while financial institutions will not be able to deal with or store crypto, online wallets like BTC.com are ideal for safe and accessible storage solutions when banks may not be the answer.”