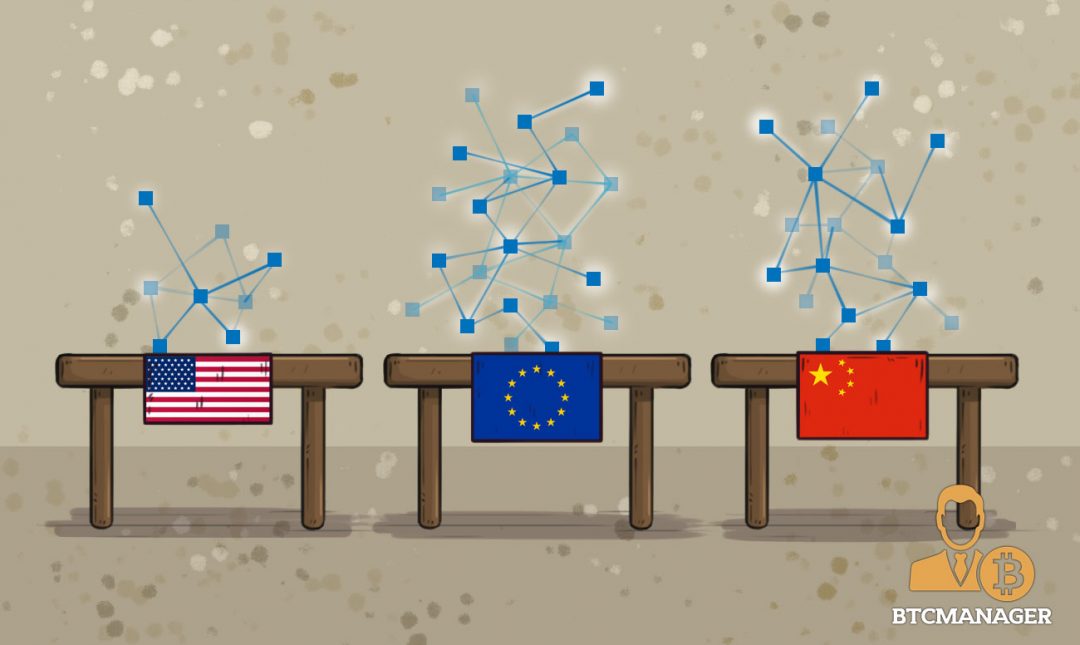 The US is falling behind China and Europe in blockchain development primarily due to the lack of regulatory frameworks. With a practical approach toward blockchain regulation, countries in Europe, as well as China, Hong Kong, and Singapore are demonstrating greater progress in blockchain implementation.

According to a blockchain startup tracker developed by Outlier Ventures, the vast majority of startups in the US are focused on the development of bitcoin and other cryptocurrency-based platforms and applications, rather than blockchain technology.

Currently, the state of New York houses some of the major blockchain development firms and companies in the US, including former JP Morgan executive Blythe Masters’ Digital Asset Holdings, Consensys, and R3CEV. Although R3CEV emphasized its detachment from blockchain technology, the consortium of international banks and financial service providers is still building a blockchain-inspired technology for the finance industry.

Some reports, including VentureBeat’s recent article authored by interim Chief Marketing Officer for Blockchain Humanitarian startup Humaniq Richard Kastelein, attributed the slow growth of the US blockchain industry to the Security Exchange Commission’s (SEC) indecisive stance on Initial Coin Offerings (ICOs). The truth is, the blockchain industry and blockchain development have minimal association with ICOs if any.

The report of Kastelein addresses the delay or the lack of growth in the US blockchain industry in terms of non-payment and non-finance development.

As Kastelein wrote, “They [most blockchain startups in the US] are mostly cryptocurrency or bitcoin-focused; few are tapping blockchain’s huge potential for non-currency purposes.”

However, while the aim of an ICO is to crowdfund capital for a blockchain project in a decentralized and transparent manner, an ICO implies that the token is worth some value to its target market. If Ethereum is taken for instance, when it initiated its first ICO, it sold ether as a means to pay for transactions and settling smart contracts. Within the Ethereum network, ether is a currency, also known as gas, utilized to incentivize infrastructure providers in the network.

More importantly, the business model of an ICO does not suit all blockchain startups and projects. It is illogical to attribute the slow growth of the US blockchain industry to the SEC and its unwillingness to regulate ICOs. No government agency or regulator so far has addressed the viability of an ICO.

Moreover, experts including Andreas Antonopoulos expressed his concerns over the majority of ICOs that have raised tens of millions of dollars without a proper roadmap or long-term strategy. Also, Antonopoulos reaffirmed that the involvement of a government agency in legitimizing or regulating ICOs would not be of any help.

“I’m sure there are some [ICOs] that are very interesting, but at least 95 percent of the ICOs out there have none/very few of the basic fundamentals. Does that mean we should have a regulatory agency decide which ones are good or bad? No. It will require more maturity among investors in identifying Ponzis. The best way to learn which ICOs are worth it is to lose money,” said Antonopoulos.

As of current, the sole difference between the US and other countries such as China, Singapore, and Hong Kong is regulation. The governments of China, Singapore, Hong Kong, and the UAE are leading blockchain development with private companies such as banks and blockchain startups, granting leeway when it comes to regulatory frameworks. Their approach is to regulate the blockchain industry as it grows and demonstrates some potential to various conventional industries.