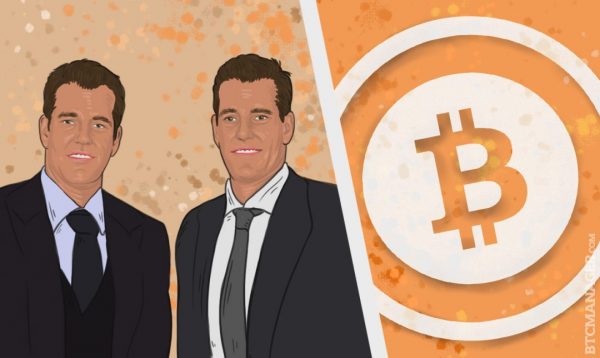 One Day Rich, Next Day Richer

On January 18, 2018, as the price of bitcoin plummeted below the $10,000 mark, which Bitfury vice chairman George Kikvadze described as the “psychological threshold,” the net worth of the Winklevoss twins declined by $443 million. For 48 hours, the Winklevoss twins went from bitcoin billionaires to millionaires.

Merely one day after the report of Bloomberg was released, the Winklevoss twins have become billionaires once again, as the price of bitcoin recovered from $9,300 to $11,600. The valuation of the entire cryptocurrency market surged by $140 billion over the past 24 hours, from $430 billion to $570 billion.

In early December, the Winklevoss twins reaffirmed that even though bitcoin has made them billionaires within a four-year period, they still expect the value of bitcoin to appreciate by at least tenfold from the current rate and reach a multi-trillion dollar market cap.

During an interview, Cameron Winklevoss stated that as major financial institutions continue to build infrastructure around bitcoin, a rapidly increasing number of investors will begin to acknowledge and adopt bitcoin as digital gold and robust digital currency.

“We think that bitcoin is a gold disruptor. We think it’s just the beginning. We are definitely holders,” said Winklevoss, adding that the value of bitcoin could increase by 10 to 20 times within the next 12 months.

The Shifting of Financial Sentiments

Last month, JPMorgan global markets strategist Nikolaos Panigirtzoglou shared a similar sentiment as the Winklevoss twins and stated that bitcoin could evolve into a major asset class in consideration of the recent integration of the cryptocurrency by the Chicago Board Options Exchange (Cboe) and CME Group.

In January 2017, the New York Stock Exchange (NYSE) and Cboe also filed for six bitcoin exchange-traded funds (ETFs), that are expected to substantially increase the liquidity of individual investors in the traditional finance market in trading bitcoin and cryptocurrencies in general. Panigirtzoglou said,

“In all, the prospective introduction of bitcoin futures has the potential to elevate cryptocurrencies to an emerging asset class. The value of this new asset class is a function of the breadth of its acceptance as a store of wealth, and as a means of payment and simply judging by other stores of wealth such as gold, cryptocurrencies have the potential to grow further from here.”

Due to the massive potential of bitcoin, especially if it can target the $8 trillion market of gold and the $40 trillion offshore banking industry, the Winklevoss twins along with other billionaire investors such as Mike Novogratz expect the market valuation of bitcoin to enter the trillion dollar region within 2018.