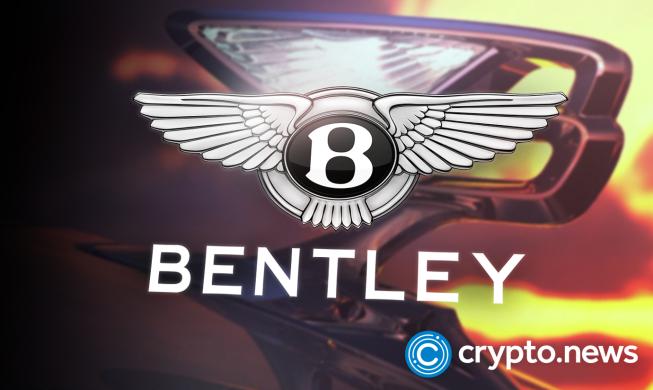 By September, popular British car manufacturer Bentley is looking to venture into the NFT ecosystem. The carmaker will unveil its limited-edition collectibles on a yet-to-be-announced NFT marketplace in the coming weeks.

The carmaker will debut its first NFT on the carbon-neutral Polygon platform, limited to only 208 pieces of collectibles. Accordingly, the NFTs are set to be uniquely created by Bentley Design, depicting the exquisite British taste in luxury automobiles.

Holders of the digital collections will benefit from exclusive rewards and access to VIP privileges. Bently is positioning itself to dominate the Web3 ecosystem for the automotive industry, and its first NFT drop will drive its long-term vision.

Furthermore, the 208 limited-edition collectibles are more than just a number. It signifies Bentley’s previous high-performance cars’ speed level. The Grand Tourer and the R-Type Continental. These cars hold a special place in Bentleys’ design evolution due to their iconic status.

However, the Bentley NFT collections will only be minted on the Polygon Blockchain network. Polygon is an Ethereum-based public chain that is used to onboard many entities to the Web3 space.

Bentley also supports the carbon neutral drive, which is why it picked Polygon due to the network’s pledge to go completely green by the end of the year. Thus, all of Bentley’s NFT collections would be carbon neutral.

Furthermore, Bentley is also a signatory to the zero carbon movement as it seeks to achieve zero carbon emissions by 2030. All Bentley cars will run on electric batteries instead of fossil fuels. The car maker’s first foray into Web3 must follow the same pattern.

Bentley Looks to the Digital Arena

The rapid explosion in the number of Bentley customers doing most of their activities online has inspired the car makers’ decision to venture into NFT. The influx of online transactions, digital goods, businesses in the metaverse, and cryptocurrency trading is another reason Bentley chose to go digital.

Moreover, the digital marketplace is increasingly becoming the preferred location for buyers and sellers to interact. The emergence of NFT collections has seen a surge in demand for digital art, and Bentley believes it can replicate that in the luxury automobile space.

The British car maker’s NFT collections are the first of their kind for the automotive brand, signaling its intent to explore the Web3 environment. Bentley revealed that it would explore other digital ecosystems like the metaverse, blockchain, online gaming, and others.

Holders of the newly released NFT collectibles will be treated to special rewards and exclusive opportunities, which the carmaker will announce in due time.

Bentley plans to use the proceeds from the NFT sales to support students interested in design, manufacturing, and engineering. These are all core areas where the company needs talent regularly.

Additionally, it plans to support entities working on environmentally sustainable projects, especially in the logistics sector.

Bentley revealed that the pieces of the NFT collections and the art featured in them would be public following the offer next month.