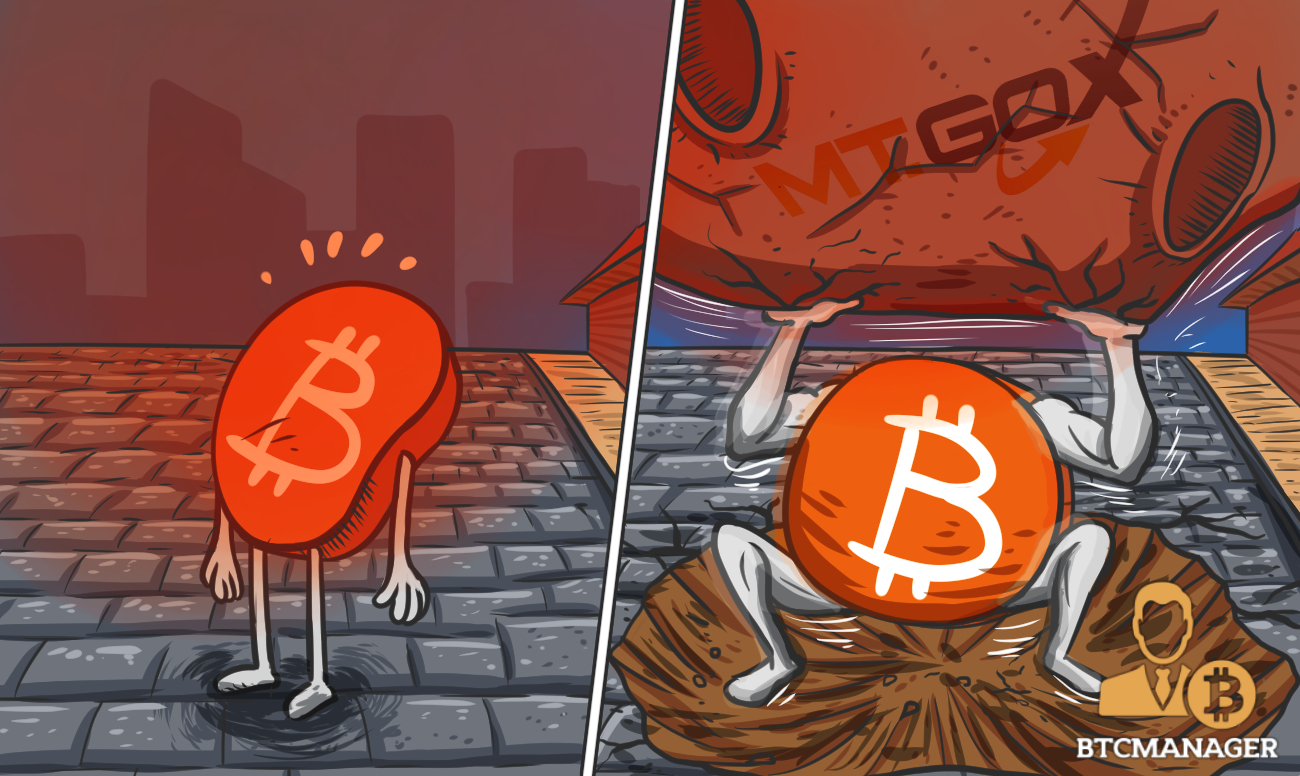 The price of bitcoin has remained firm in the past seven days, gaining eight percent week-on-week. This price rally has occurred despite the announcement of the Mt.Gox bankruptcy trustee that former users will now be able to file claims to recover their lost bitcoin from the defunct exchange.

Given that Mt. Gox shut in 2014, account holders who lost funds at the time will now receive their bitcoin holdings that are worth substantially more than they were back in 2014. That means that selling pressure will likely hit the market once the claims are being processed as investors will likely cash in some of their profits. Despite this, the bitcoin market held up.

Bitcoin and crypto-positive news have been the announcement of Yahoo Finance now offering cryptocurrency exchange services for its users. Yahoo Finance users can now buy and sell bitcoin, litecoin, and ether directly through the website in what can only be described as a big step forward for cryptocurrency adoption.

On the topic of adoption, news also emerged this week that U.S. rapper Eminem is mentioning bitcoin in one of the songs on his new album, which will expose the digital currency to his millions of listeners globally.

The altcoin market finally experienced a relief rally after struggling to keep its value throughout most of August. EOS, IOTA, Dash, and Monero were the clear winners of the week, gaining over 30 percent week-on-week.

In what many news outlets have described as a big step forward for mainstream crypto adoption, Yahoo Finance has launched a new option allowing its users to buy and sell Bitcoin, Ethereum, Bitcoin Cash and Litecoin.

The popular finance platform, which previously only focused on traditional forex and capital markets, introduced the new “Buy” and “Sell” buttons next to the latest price data of the four major coins.

And while Yahoo is yet to release a public statement regarding the crypto-enabled trading, the company has been active in building out its cryptocurrency data offerings.

Blockchain and cryptocurrency-related courses are increasingly gaining popularity among the students of top global universities, according to a new Coinbase study conducted in collaboration with London-based ad-tech company Qriously. Published on Aug 28, 2018, the study concludes that four out of ten of the top 50 universities across the world today offer at least one course on blockchain technology or cryptocurrency.

The findings also pointed out that these courses attract students from a wide range of disciplines, not just those with a background in finance.

The Coinbase research includes a Qriously survey encompassing 675 students from U.S.-based universities. Additionally, the researchers also conducted an extensive review of courses offered by 50 top global universities and interviewed professors and students from these institutions.

The study found that 42 percent of the universities surveyed currently offer at least one course in blockchain or cryptocurrency, and if the longstanding foundational courses on cryptography are thrown into the mix, the figure goes all the way up to 70 percent. Meanwhile, of the 42 percent to have introduced blockchain and cryptocurrency classes, more than half (52 percent) offer at least two or more courses.

Khrapov is said to have contacted the Ministry of Finance to request hearing about crypto-governance legislation winding its way through the Russian parliament. The bill, called “On Digital Finance Assets,” explicitly defines the Russian ruble as the only legal tender in Russia. The legislation, in its current form, provides legal definitions and protection of “digital assets.”

The ministry ascertains that companies and individuals dealing with crypto assets must obtain a “mandatory registration with state authorities” and conduct due diligence on tax regulations.

The new amendment proposed by Khrapov would limit the amount of cryptocurrency that can be traded under the radar. While the details of the bill remain mostly unknown, Crowdfund Insider reported that the ministry plans on implementing “mandatory monitoring” of all crypto transactions exceeding 600,000 rubles, or around $9000 US.

Jerry Brito with Coin Center has published an article outlining the lack of inaction by the IRS and the confusion that this is causing among cryptocurrency investors and users. Jerry points out the risks:

“In the absence of useful guidance, taxpayers have filed their returns in a state of genuine confusion about the state of the law. Unfortunately, this puts them at risk of being assessed penalties on top of their tax liability, should they get the law wrong.”

The most notable event that has affected large numbers of cryptocurrency investors is the Bitcoin and Bitcoin Cash Fork on August 1, 2017. Anyone that was holding Bitcoin on that day received an equal number of Bitcoin Cash tokens. The question remains as to whether or not this is a taxable event that requires the immediate payment of taxes. And if it does, what is the cost basis and the sale basis of this event?

In the early Dot-Com days, rather than paying cash, many employees were paid in stock options. Many employees found themselves owing to large tax bills due to the exercise of those options even as the stock continued a decline.

Cryptocurrency Under the Spotlight as E.U. Finance Ministers Meet

Amidst the ongoing atmosphere of regulatory ambiguity regarding cryptocurrencies and digital assets in the world’s largest trading area, E.U. finance ministers are set to meet yet again to hold some discussions on the topic of regulating the issuance and trade of virtual currencies. On August 29, 2018, a Bloomberg report stated that crypto has now become a political issue among E.U. member states.

One of the EU’s biggest bugbears about digital assets is the fact that their relative anonymity and sheer mobility makes them prime candidates for use as vehicles for money laundering, tax evasion, and terror financing. On September 7, 2018, finance ministers from the E.U.’s 27 member states will meet again to discuss how to get around these challenges using regulatory power.

A draft note prepared for the conference set to hold in Vienna states that concerns to be discussed include a general lack of transparency and the potential of the asset class to be used to facilitate money laundering, evade taxes and fund terror.

The ministers will debate the possibility of tightening existing rules to closing all existing loopholes and eventually making it possible for the European States and crypto to coexist without butting heads.

At press time, no comment was available from the Austrian government, which is the E.U.’s but analysts agree that the E.U., like other regulators around the world, is struggling to keep a handle on cryptocurrencies and the potential they hold, for good and otherwise.

Kingdom Trust, a company that stores digital currency for investors, has secured insurance for digital assets held on its qualified custody platform through Lloyd’s of London, one of the world’s most respected insurers.

Kingdom Trust, the first regulated financial institution to offer qualified custody for digital asset investments like Bitcoin and Ethereum, has secured insurance to protect against theft and destruction of those assets.

According to an August 28 report from Reuters, the insurance was successfully placed by broker SDBIC. This represents an unprecedented move by the once-reticent insurance industry, which is now stepping up to offer protection to companies that store cryptocurrency, a volatile and loosely regulated, but rapidly growing business.

Matt Jennings, CEO of Kingdom Trust, said in a statement:

“We serve both institutional and individual investors by providing qualified custody, which gives our clients the framework they need to ensure compliance with their regulators using clear and transparent reporting.”

Kingdom Trust is a qualified, independent custodian that serves over 100,000 clients (with over $12 billion in assets under custody) by providing security, accounting, reporting, and insurance for more than 30 different digital currencies.

“From the very beginning we saw insurance as a key factor to bring institutional investors into the marketplace,” he continued.