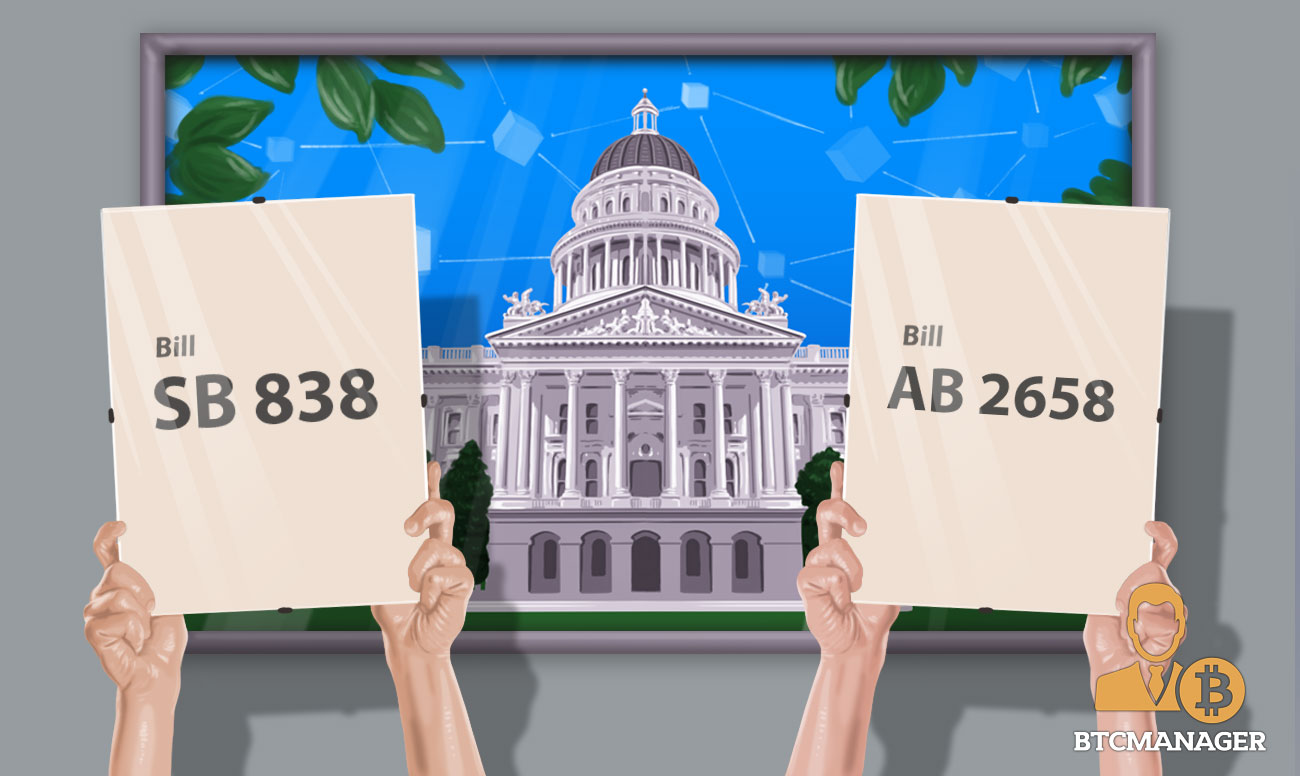 On September 28th, 2018, the state of California passed two blockchain bills into law. The two bills, each tabled by different members of the state’s legislative houses, define blockchain, cryptocurrencies, and allow innovations backed by this technology to have legal standing.

California’s pro-blockchain advocacy group, the Blockchain Advocacy Coalition played a significant role in the process through which the bills were eventually signed into law.

The state of California has long been known for its progressive politics. While it initially lagged behind its counterparts in the U.S. about blockchain technology, legislators are now working to remedy this.

The first of the two bills was created and tabled by Senator Robert Hertzberg. Representing the 18th District of California, Hertzberg presented bill SB 838. The law provides a legal framework through which companies can use blockchain technology to record stocks. It includes a definition of blockchain technology and defines the parameters through which the law supports using the innovation to records issuance and transfers of stocks.

The second bill is the brainchild of assembly member, Ian Calderon. Calderon represents the 57th District and also serves as the Assembly, majority leader. His bill, AB 2658, also defines blockchain technology. Additionally, the bill serves as an update of the Uniform Electronic Transactions Act to include legislative support for contracts signed electronically and negates the need for written authorization.

Bill AB 2658 also requires the creation of a working group within the State Government of California. The working group will include members of the cryptocurrency community as well as legislators. The purpose is to create the opportunity for a comprehensive look into blockchain technology. The working group will then report back to the Legislature on or before July 1, 2020, with details on the potential the blockchain has for Calfornia’s individuals and businesses, as well as for use within the state’s apparatus.

Calderon explains the working group is necessitated by the evolving nature of the technology and is pivotal to best creating a conducive environment.

“As a complex, emerging technology, it is important to define “blockchain technology” in the statute, as well as identify potential technical, regulatory, and governance hurdles, in order to provide greater certainty regarding the technology’s legal standing.”

While these two laws are taking a decidedly pro-blockchain stance, the first blockchain-related proposal in California took a definite opposing position. Tabled by California State Senator Holly Mitchell in 2015, the controversial AB-1326 bill aimed to impose restrictions on the actions of digital currency startups, exchanges, and organizations.

The bill would require these parties to acquire licenses before they could transact in cryptocurrencies. The bill was eventually dropped due to an intense outcry from pro-crypto individuals and advocacy groups alike.

“Throughout the legislative process we had tremendous feedback from innovators and companies who are already working with blockchain about how important this measure is to their industry. I’m grateful that Governor Brown recognized the importance of maintaining California’s position as a global leader in technology and innovation by signing AB 2658.”

Moreover, the State is also home to some progressive and inclusive laws. For instance, California was one of the first states in the United States that decriminalized recreational Marijuana use. From 2016, California’s residents were able to partake in the recreational use of Marijuana.

Unfortunately, businesses in the Marijuana industry are having trouble accessing the traditional financial system. As a result, some are considering the use of cryptocurrencies as a solution.

Stakeholders recognize the potential of blockchain technology, even for matters that may seem unrelated, across the state. This is part of the motivation for blockchain advocacy groups working to support legislators in creating a conducive environment in which the innovation can function to better profits as well as the quality of life for people.

Ally Medina, the Director of the Blockchain Advocacy Coalition, explains:

“Blockchain has the potential to revolutionize many industries in the near future. It is vital that California recognizes and supports this industry as an economic driver in our state.”

The Role Played by Advocacy Groups

Advocacy groups are becoming an essential part of the blockchain and cryptocurrency community. They are a pivotal part of how the community interacts and communicates with legislators. The Blockchain Advocacy Coalition played a significant role in the ratification of California’s new bills.

In a statement, Senator Hertzberg reiterated his belief in the work done by advocacy groups, especially about educating lawmakers on the use cases of blockchain technology.

Lobby groups work by providing opportunities for lawmakers to come into contact with objective, fact-based information about a particular issue. Lobbyists usually work with the end goal of creating a legislative framework that is supportive of the interest group they are working for. Within the blockchain and cryptocurrency context, lobbyists play a critical role.

Due to the ever-evolving nature of the technology as well as the constant yet often negative media coverage, it is crucial for lawmakers to have access to non-sensational facts about the technology. Lobby groups such as the Blockchain Advocacy Coalition, create concise resources for use by lawmakers.

This is not the first instance of pro-blockchain lobby groups in action. For instance, leading cryptocurrency exchange Coinbase filed paperwork earlier this year, launching its Political Action Committee. While the Coinbase PAC is yet to state its proposed actions, it is safe to assume the committee will be involved in pro-blockchain and cryptocurrency legislation in the future. Coinbase has experience with wading in the lobbying waters, having donated $3000 to a PAC called BIT PAC in 2014.

The Bitcoin Foundation has also participated in lobbying on Capitol Hill. In 2014, the foundation hired a professional lobbying group in Washington called Thorsen French Advocacy to work on educating the lawmakers on the potential held by digital currencies.

Speaking to Business Insider, Stapper explained that poorly informed legislators were a major stumbling block in the path towards legitimizing digital currencies. Thus proper educational resources and activities geared towards lawmakers would go a long way.

More recently, in 2017, a bipartisan lobbying group called the Congressional Blockchain Caucus was set up by a duo of politicians. A Republican from Arizona named David Schweikert, and a Democrat from Colorado called Jared Polis created the CBC with the aim to empower lawmakers through information which would, in turn, support the development of a proper legislative framework for blockchain-based innovations.

Polis explained that while the potential of blockchain technology is well-known in some circles, it was essential to communicate this effectively to the policymakers.

While it is difficult to measure the amount of influence that advocacy groups hold effectively, there is evidence that these type of groups result in some positive momentum. At the very least, they may be able to teach legislators as was the case between California and the Blockchain Advocacy Coalition.

Moreover, lawmakers may be willing to support new technologies but are hampered by a lack of trustworthy data. As explained by Medina, sufficient information may be the key to unlocking support from progressive legislators.

“These are common-sense bills that send the message that California supports innovation and the blockchain industry – Governor Brown, Senator Hertzberg, and Assemblymember Calderon have all demonstrated the forward-thinking leadership we need in Sacramento.”