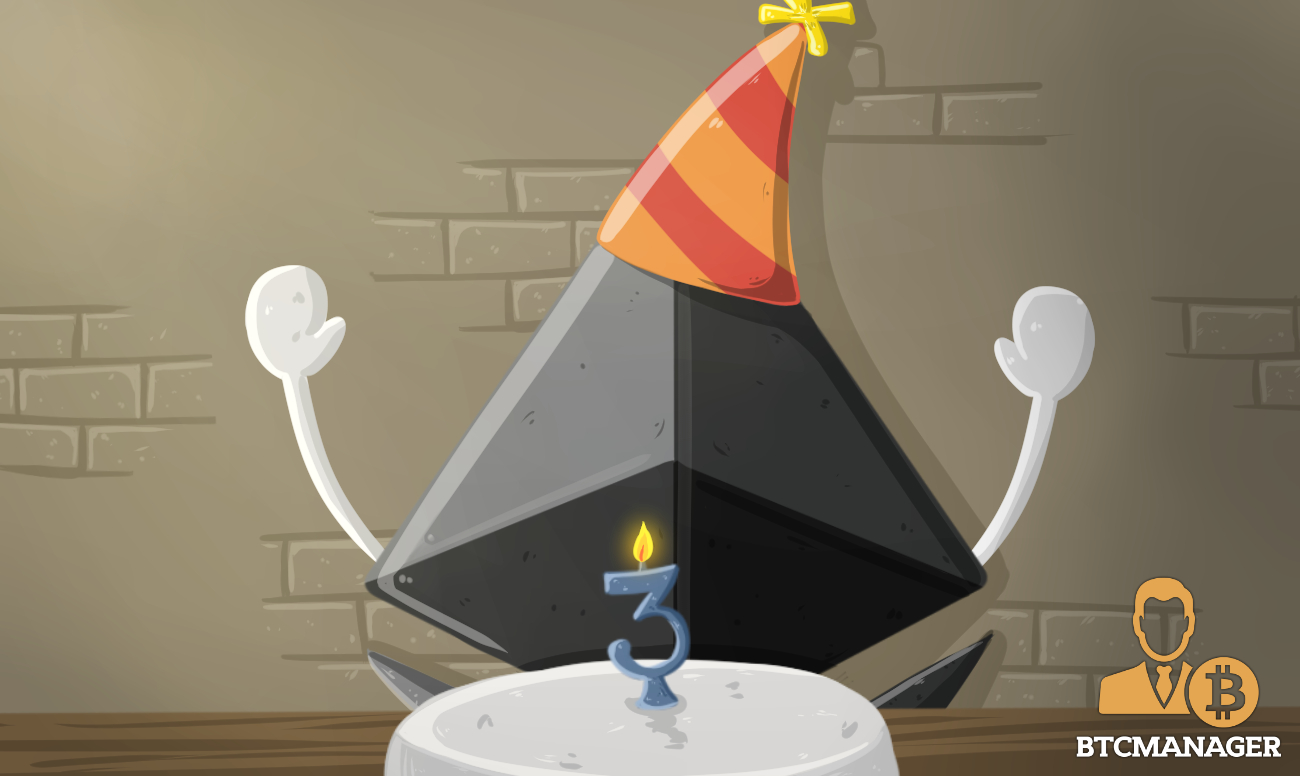 On July 30, 2015, Ethereum was launched by co-founders Vitalik Buterin and Joe Lubin. Three years on it has become the second biggest cryptocurrency in the world as well as creating an extensive blockchain landscape for all newcomers.

A Constellation of Value

Ethereum created a constellation of businesses branching off of its platform hosting over 700 tokens and more than a 1,000 decentralized apps (DApps). However, Ethereum did not become the crypto juggernaut it is today overnight. In the following retrospective, let’s take a look back at the challenges and opportunities that have faced Ethereum in the past as well as some that are coming down the road.

While Bitcoin has maintained a higher value, Ethereum has allowed greater access to the crypto space for those interested in starting some form of blockchain or crypto business. While it has not overtaken the pioneer cryptocurrency, it has inspired endless debate as to who owns the future of crypto.

In 2011, Vitalik Buterin was a programmer who became inspired by developing a platform which went far beyond financial markets. He wanted to create an intersection between economics, cryptography, information theory, and decentralized systems. In the end, he wanted to create what he describes as a “world computer.” In 2013, he put that theory down in a white paper.

In 2014 Ethereum began software development through Ethereum Switzerland GmbH and subsequently through the non-profit Ethereum Foundation. At the beginning of the network, the financing came from a crowdsale which allowed the general public to purchase ether (ethereum’s native token) using bitcoin. In the end, 60 million ETH was purchased by presale investors with 15 million kept for the developers. Ethereum was funded and ready to change the crypto ecosystem.

However, while there was great excitement surrounding the initial financing and development of Ethereum, there were persistent concerns about its ability to scale and ultimate security. If Ethereum were to become the world computer that everyone hoped, it would have to ensure both of these features were foolproof in order to attract investment and further development.

A Headstart in a new Field

Although Ethereum managed to put these concerns out of the minds of early investors, similar questions about the long-term viability of the technology persist even three years on.

“Olympic” was launched in May 2015, during which time a “bug bounty” of 25,000 ETH was offered to hackers who could stress test the burgeoning system, hoping to find any problems before the official launch. July 30, 2015, Ethereum went live.

The first iteration of Ethereum was dubbed Frontier, which attracted the attention of financial institutions and investors outside of the initial crowdsale. The world computer was turned on.

However, the short history of Ethereum was not without its difficulties. On May 15, 2016, a group known as The DAO (Decentralized Autonomous Organization) famously launched a record crowdsale on the Ethereum platform. The group raised $150 million in its initial coin offering (ICO). By June 18, the group was hacked and relieved of $50 million in ETH. Ethereum was forced to respond to exploitation or risk the trust of its investors.

This sparked an intense discourse in the crypto space revolving around the question of “forking.” Ethereum had to decide if it would change the protocol diverting from the original blockchain to recover funds or continue with the previous set of protocols.

In 2016 Ethereum forked twice dividing the company into Ethereum on the new blockchain and Ethereum Classic (ETC) which operated on the original blockchain. The reason that some in the Ethereum network chose to remain in Ethereum Classic was the philosophy of immutability in the crypto space. This is the hardline ethos that no blockchain can be altered, to them, “code is law.”

The DAO event, as it would come to be known, uncovered one of the principal conflicts in the blockchain community. While one side argues for immutability, the other argues for adding additional protocols to resolve unseen disputes. This event was enough to drive the value of Ethereum down until it began a massive recovery of value in February of 2017 at which point Ethereum reached a market cap of $1 billion for the first time.

After hard forking twice, and recovering market value, the Enterprise Ethereum Alliance (EEA) was formed. This was a group of companies which came together to create an open architecture to accelerate the adoption of Ethereum technology in the global business environment.

The EEA grew from 30 original members at its inception March 2017 to over 150 members by July 2018. The broad adoption of Ethereum by reputable businesses helped push the price of ETH over $100 for the first time.

October 2017 saw the launch of the next iteration of Ethereum called Metropolis Part 1: Byzantium. This first, of the three-part upgrade, put an 18-month delay on the so-called “difficulty bomb,” or an exponential increase in the difficulty of mining, thus restricting the flow of new capital into the Ethereum market. Defusing the difficulty bomb (at least for now) kept the value of Ethereum competitive and helped it to maintain its superiority.

In the winter of 2017 markets saw the highest valuations of cryptocurrencies with Bitcoin reaching $20,000 and Ethereum rising as high as $1,418. This pushed the daily trading volume to $10 billion and the market cap to $135 billion.

However, the rally was not to last. It was met with an equally dramatic drop, falling to where the price for ETH currently sits around $460. The crypto market has begun to gain value after the recent drop with Ethereum maintaining its secondary position as the most influential cryptocurrency in the space.

While the value of Ethereum has dropped a portion of its token value, it has also produced a platform upon which decentralized businesses can be predicated. If Bitcoin stores value, Ethereum has launched a space where value can be created. This space allows for the creation of smart contracts, permissioned ledgers, decentralized apps, and even assassination prediction markets.

While the second version of Ethereum Metropolis named, Constantinople, has yet to be launched, it remains to be seen if Ethereum can maintain dominance in the field. However, after three years, it is undeniable that Ethereum has shifted the paradigm upon which blockchain businesses and cryptocurrencies can operate.