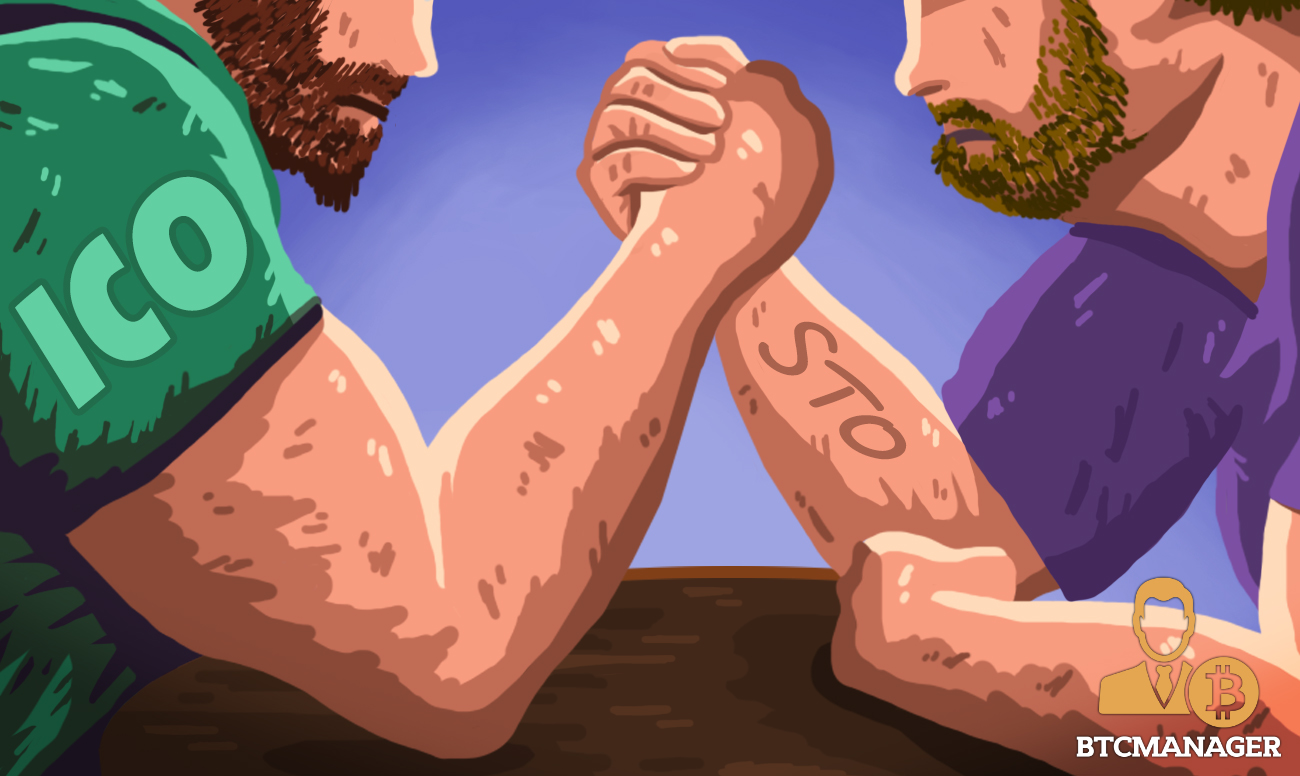 There are two major ways for new cryptocurrencies to enter the market and naturally, both of these funding methods have advantages and disadvantages which can sometimes boil down purely to circumstance.

In this guide, BTCManager will compare and contrast initial coin offerings (ICOs) as well as security token offerings (STOs), look into the differences between the two, and most importantly, how to choose between them.

Why Do Cryptocurrency Projects Need Funding?

As with any product that enters the market, coins and tokens need initial funding as well. In the cryptocurrency world, there are two main ways that coins and tokens get introduced to the markets, either through an ICO or an STO.

Both funding methods aim to introduce potential customers to the product, but also to secure the financial means needed for the currency or platform to develop and grow. If the coin performs well in the initial funding stage, this is a key indicator that there will be future interest in it.

This is why it is extremely important to choose wisely when deciding whether to use an ICO or an STO when introducing a cryptocurrency for the first time.

What Is an ICO?

An initial coin offering is the better-recognized funding method. Many of the most successful cryptocurrencies have undergone initial funding this way. A successful ICO consists of several important steps.

First, once a company has a clear idea of the type of cryptocurrency or service it aims to offer, it has to create a detailed white paper. This is essentially a guidebook of how and why the cryptocurrency will be created, and how it is going to develop in the future. Such documents also outline the main use cases for the currency.

The second important step for a company aiming to launch a new cryptocurrency is to create an engaging and informative website, where potential customers will be able to get information about the coin. The website should contain the information presented in the white paper, however, introduced in a more accessible way.

Both the white paper and the website are tools for companies to educate potential customers about their project, and most importantly convince them that this would be a successful investment, and not an extremely risky one.

In many aspects, an ICO can be compared to a traditional initial public offering (IPO). However, there is one significant difference between the two – a person’s participation in a coin offering does not grant them shares of the company, or ownership rights over the product.

Taking part in a coin offering is simply an investment in a project one deems successful, and not a buy-in in a company.

What Is an STO?

The way an STO is created follows the same steps. A company has an idea about a new cryptocurrency or service, so it creates a white paper and a website, aiming to attract investors and funding.

However, unlike the ICO, which is relatively unregulated, an STO has to comply with a set of rules issued by the U.S. Securities and Exchange Commission (SEC).

The SEC rules over all types of securities, which is why some coin offerings fall under their supervision. Security tokens are very similar to traditional securities. The only difference is they exist on a blockchain. Another important distinguishing characteristic of a regulated coin offering is the fact that it is backed by already existing assets.

As security, an STO can offer partial ownership to investors, which brings additional value and serves as an incentive for potential funding.

Pros and Cons of an ICO

The main difference between the two types of coin offerings is the degrees of regulation to which they are both subject. An initial coin offering is less regulated when compared to an security token offering. While STO’s must comply with adopted regulations for all securities, an ICO is not bound by these rules.

The lack of regulation associated with a traditional coin offering can be seen both as an advantage and as a disadvantage. Depending on the type of investment a potential client is looking for, a traditional ICO can be more suitable than an STO.

Contrary to a security regulated offering, initial coin offerings are more flexible when it comes to investors’ options. ICO investors can participate at any point in time, and from anywhere in the world, as their investment does not follow strict regulations by the SEC. Not only that, but unregulated offerings allow contributions from anyone interested.

Generally, the biggest benefit of choosing an ICO is that it is a highly liquid type of investment, and funds can be managed with greater ease. The fact that participants use their own blockchains to manage and distribute funds also provides for easier flow of investments.

On the other hand, the lack of regulation from a government authority automatically increases the level of risk that comes with investing in an ICO.

Some of the major hurdles participants face are related to problems with regulatory authorities, which are actively trying to restrict this type of coin offering. Without control form authorities funds invested in the project might be irretrievably lost, if the project is unsuccessful, as they are not protected by law.

Other disadvantages of ICOs are predominantly related to the uncertainty of whether a project will be successfully finished as it is described in the white paper and advertisement campaigns.

Pros and Cons of an STO

In their essence, both types of coin offerings follow the same steps, however, ICOs are significantly less regulated by control authorities like the SEC.

The main benefit that this SEC regulation brings for investors is the security that they are putting their money into a serious project, which has reasonably fewer reasons to fail compared to most ICOs.

STOs have one other advantage compared to ICOs and that’s the security that all tokens are backed by already existing assets. This means that in the unlikely event of failure, investors will have protection over their funds.

While many find the significant regulation that comes along with a security token offering advantageous, others may see it as a drawback. Such offerings usually develop slower than ICOs as the time it takes to create an SEC compliant project is significantly more than simply putting together a website and a white paper.

While both of the methods for initial funding are similar in their basic organization it is important to make an informed decision when choosing whether to participate in an ICO or an STO.

Nowadays, trends show that ICOs are falling in popularity compared to STOs.

In fact, the majority of predictions confirm that security token offerings are the future of initial funding practices, and they are expected to overshadow unregulated offerings in the near future.