On May 5, 2018, Singapore-headquartered crypto-exchange Huobi released its “Cryptocurrency Investor Sentiment Index Report April,” which collated data from thousands of users on their sentiments about the digital assets market. The results were certainly positive, and represented an increase of 17 percent in investor’s “bullish sentiment.”

For the report, which took place from April 25, 2018, to April 30, 2018, Huobi distributed questionnaires to 1,974 investors from over 23 countries, via different internet channels such as WeChat, Weibo, email, Telegram, and Twitter. Huobi added that it was the “first time that data from professional investment institutions were taken into account.”

The first question took the investor’s views on how large the cryptocurrency market could get in the next month.

As seen in chart below, investors are largely optimistic about cryptocurrency’s short-term future, with 50.4 percent test-takers believing the market cap would “substantially increase.” The figure indicates a 24.4 percent increase since March 2018, and can be attributed to the market’s run in the last week of April 2018.  However, 11.4 percent of voters do not believe the market is ready for a bull run just yet, with a small fraction predicting a possible “slump.” 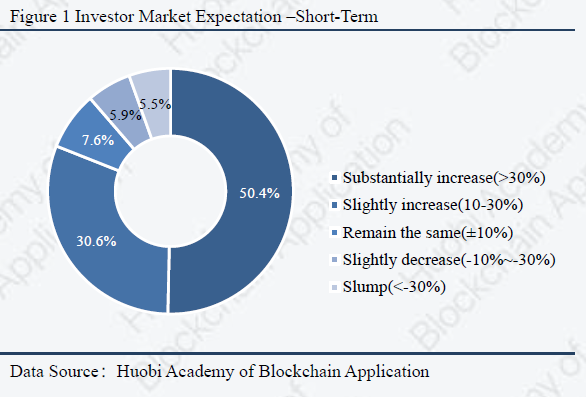 Second, Huobi questioned investors on their mid-term outlook for the cryptocurrency market, i.e., the next six months. 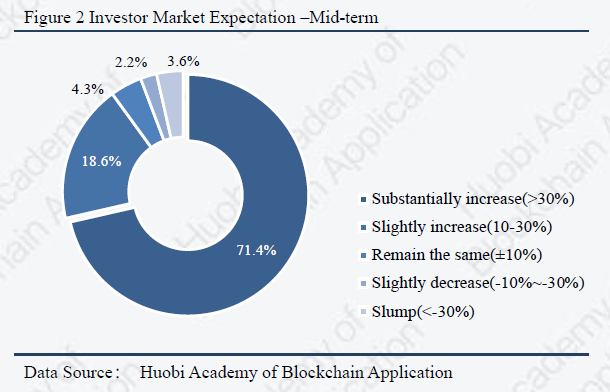 Finally, investors were asked about their long term (three year) outlook for the cryptocurrency market, with the results as shown in figure 1.3

Undeniably, most investors expressed confidence in the market’s growth, with a mammoth 84.1 percent test-takers voting for a “substantial increase” in the market cap by 2021. Overall, upwards of 90 percent voters were bullish long term on the market, with a tiny 2.7 percent believing in a market “slump.” 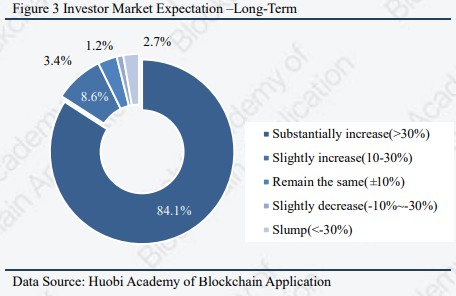 The cryptocurrency investor sentiment index is released monthly by the Huobi Academy of Blockchain Research, presumably Huobi’s wholly funded research arm. In term of data collation, the research body calculates points on a per-answer basis, with 100 points being the most and 0 points the least.

A higher number of points denotes increased investor confidence, and this is calculated for varying time-periods, namely – short-term, mid-term, and long-term. The test has been designed to be easy and brief, to allow for investors to quickly give feedback on what they believe the market to be.