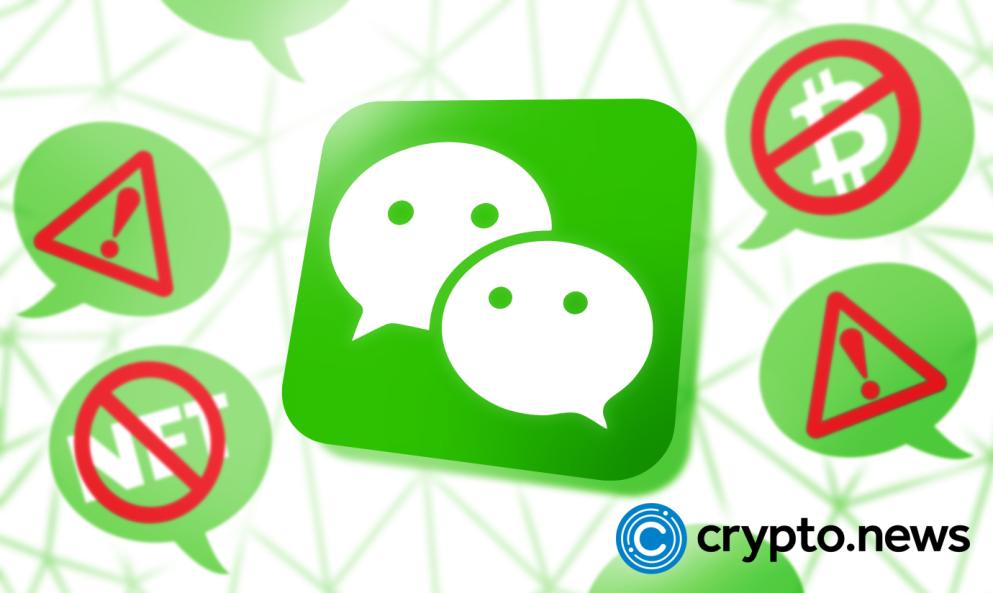 The Chinese social media platform WeChat has added some new guidelines to its existing regulations for users of its platform. WeChat has previously suspended some users’ accounts alleged to be linked to NFT trading to avoid price speculation.

According to local reports, the social media giant is keen on stamping its mark regarding transactions in digital assets on its platform. The updated regulations support the government’s effort to address the risks associated with digital assets.

However, part of the new rules indicates that the platform will no longer permit accounts to trade, finance, or provide transaction services on WeChat. In addition, any accounts found wanting by the new guidelines will be dealt with.

Despite the lack of regulation against NFTs in the country, WeChat has taken measures to oversee the activities of traders on its public accounts. Although the Chinese governments banned cryptocurrency last year, WeChat also includes digital currency due to its popularity among the Chinese.

Cryptocurrencies and, by extension, digital assets like NFTs have been under the spotlight for many weeks as the market correction holds sway. Cryptocurrency has been hit the most as the industry loses its market value.

WeChat is the Chinese version of Facebook, with over 1 billion daily users in the country. Its public accounts have been the subject of widespread regulations because of the Chinese authorities’ restrictions on cryptocurrency.

Meanwhile, there are rumors that crypto trading still exists in the Communist nation, albeit it is discreetly done. Meanwhile, the government has placed strict penalties against anyone caught trading in cryptocurrency or promoting its adoption.

The Chinese government has been noticeably hard on tech startups over the past few months, and this has never happened before. Towards the end of 2020, regulators have intensified their efforts to oversee the activities of top tech players in the country.

The likes of Alibaba, Tencent, WeChat, and others have come under immense scrutiny as the government looks to get a grip on the tech sector.

Meanwhile, the heightened monitoring and strict enforcement have pushed many companies to adopt the same approach on their platforms. This, however, came at a price as users showed their displeasure with the new changes.

The government’s previous stance has been eased to help the growth of the tech industry. There are indications that the government is using the latest development to counter the economic impact of COVID-19 after a series of outbreaks resurfaced in 2022.

Meanwhile, the latest move by WeChat seems to be an effort to protect users of its platform against the volatility of digital assets. The ongoing market correction has many tech companies on their toes as they attempt to protect their space.

The current situation calls for drastic action, and WeChat is right to take precautions.