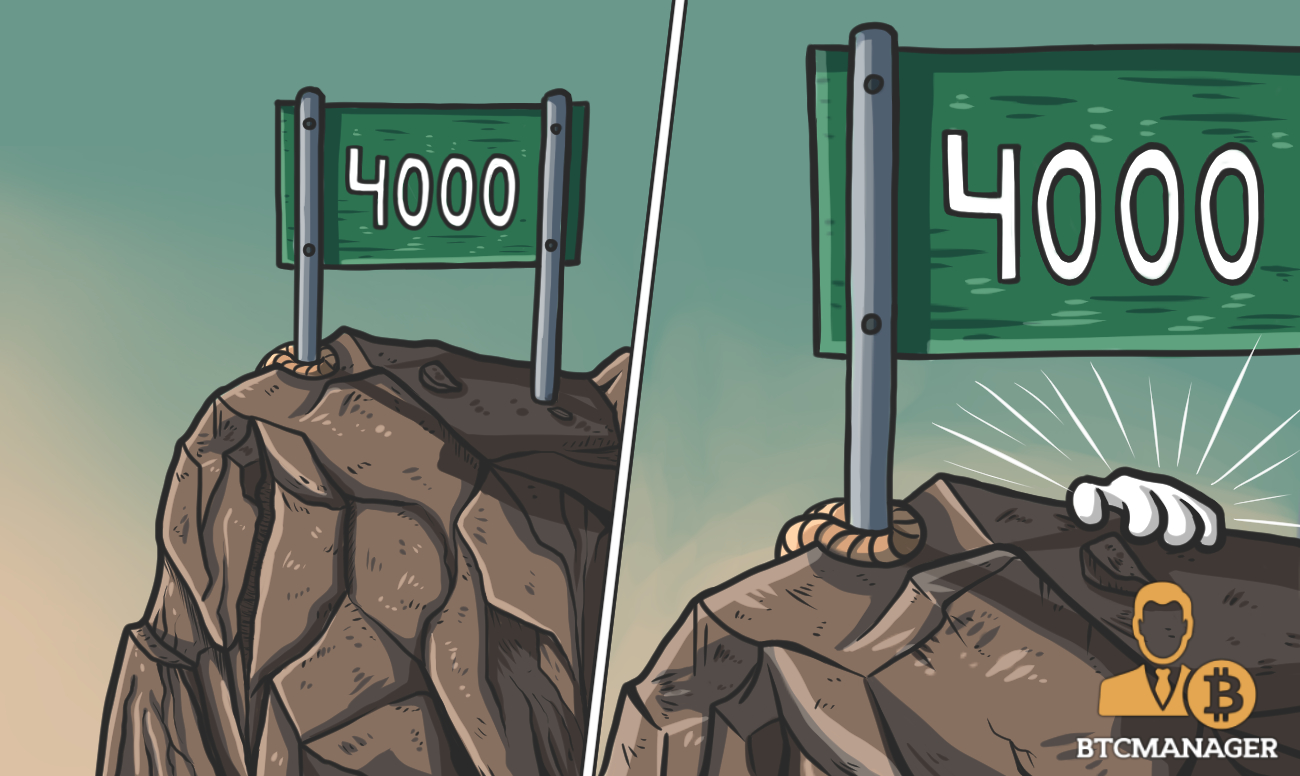 After two dark red weeks, bitcoin finally managed to recover and gain new support above the $4,000 mark after trading as low as $3,600 in the prior week. The relief rally saw the price of bitcoin bounced back by almost ten percent to close the week at around $4,150.

As the BCH hash war – the primary driver of uncertainty in the crypto market that sparked the recent price crash – has seemingly come to an end, the price of bitcoin managed to regain its footing.

Many investors are taking the recent crash as an opportunity to add long positions to their portfolios as they may not to the chance to buy coins at these levels again. Some industry experts, such as BitMEX’s David Hayes, believe that we have not seen the bottom yet and could experience lower lows before the close of the year.

In the altcoin market, the main story is the outcome of the Bitcoin Cash (BCH) hash war, which has resulted in Bitcoin ABC’s upgrade of BCH retaining the Bitcoin Cash name and ticker while Coingeek’s Satoshi’s Vision now trades at Bitcoin SV on the exchanges that have decided to support the BCH fork.

With BSV backer Calvin Ayre’s deep pockets and willingness to support “his” coin, it will be interesting to see how much the price of Bitcoin SV will be pumped before its price will collapse, as the likelihood of BSV user adoption is rather slim.

This week’s contributions were provided by Priyeshu Garg, Cindy Huynh, and Rahul Nambiampurath.

Mohamed El-Erian, Chief Economist at Allianz, has stated that cryptocurrencies will survive the current market slump and achieve widespread acceptance subsequently. Speaking on November 27, 2018, at the Coindesk ‘Consensus: Invest in New York’ conference, El-Erian became a somewhat unlikely voice of support for crypto, declaring that not only will it survive and thrive, but the entry of institutional investors into space will accelerate and deepen crypto acceptance and adoption.

Speaking at the event, El-Erian talked up institutional investor participation in crypto, stating that even though retail investors are investment-shy at the moment because of bearish market conditions, the continued and deepened involvement of more prominent investors in various crypto projects ultimately bodes well for space as a whole. BTCManager recently reported that a Q3 2018 report by Greyscale Investments showed that institutional investors are increasingly taking up strategic positions in spite of the crypto bear market.

Explaining the reasoning behind his position on cryptocurrencies, he said: “I think cryptocurrencies will exist, they will become more and more widespread, but they will be part of an ecosystem. They will not be dominant as some of the early adopters believed them to be. We are seeing a rotation going on – retail is becoming more reasonable if you like. The exuberance is behind us, and institutions are starting to establish a foothold, and that’s good long-term.”

Wall Street Continues to Experiment with Cryptocurrencies Despite Crypto Crash

Players in the mainstream finance sector continue to experiment with cryptocurrencies and blockchain technology despite the recent Bitcoin crash. According to the Financial Time’s Article published on November 28, 2018, many companies such as large proprietary traders and institutional investors are still looking to ride the cryptocurrency movement, as they believe that the tokenization of physical and tangible assets are a real game-changer for the finance industry.

Don Wilson, the chief executive officer and founder of DRW, one of the largest proprietary traders in the US, is a finance leader who is undeterred by the bearish cryptocurrency market.

For example, DRW’s real estate investment arm, Convexity Properties, has engaged in creating security tokens which are backed up by tangible, real-world property and real estate. Convexity Properties recently made a deal with the owner of a student tower block near the University of South Carolina’s campus in Columbia, to tokenize the building, which will turn the original building into a private real estate investment trust. Half of the property will be sold as 955 security tokens, costing $21,000 each. These tokens will be recorded on the blockchain, to ensure that ownership can be easily identifiable.

The First Blockchain Association Opens up in Mexico

The first Blockchain Association in Mexico was recently formed by seven founding members which included Bitso, BIVA, GBM, Lvna Capital, Volabit, ConsenSys, and Exponent Capital. According to the Mexico Forbes article published on November 28, 2018, the organizations are keen to educate Mexican citizens about blockchain technology and form safety standards for the industry.

The Mexican Blockchain Association’s fundamental goal is to educate the Mexican people of blockchain technology, its many uses, and benefits.

Mouses Cassab, the founder of Exponent Capital, a private equity firm and member of the Blockchain Association, mentioned that the current uses and applications of blockchain range from reducing the costs of sending international payments to the democratization of the current existing financial system.

“This technology has the objective of creating more transparency, safe, and efficient procedures,” said Felipe Vallejo, a provisional president of the Blockchain Association in Mexico, in a rough English translation.

In addition to educating the public, the Mexican blockchain community’s agenda is also to ensure that the city has strong standards concerning the safe and quality use of blockchain technology, especially before it becomes a popular and mainstream tool. Examples of safe practices include undergoing know your customer (KYC) checks and avoiding the facilitation of illegal activities like using the technology for money laundering, or terrorist financing.

Canada-based cryptocurrency mining company Fortress Blockchain Inc. announced its Q3 2018 financial results through a press release, published November 28, 2018. One of the key takeaways from the report is the dip in gross mining margin from $740,872 in Q2 2018, to $384,274 for the quarter ending September 30, 2018.

Net loss during the quarter amounted to approximately $1.5 million, with non-cash costs occupying the major chunk of it. The firm incurred depreciation worth $387,815 on assets, and paid share-based compensation and listing expenses to the tune of $263,750 and $390,694, respectively.

During the ongoing quarter, from October 1 to November 28, Fortress has mined 37 BTC and 16 BCH. The remarkably low amount of BCH mined can largely be attributed to the controversial BCH hard-fork which went live on November 15, 2018.

Crypto Merchant Bank Galaxy Digital lost $136 million between January and October 2018
Galaxy Digital Holdings, a cryptocurrency merchant bank owned by former Goldman Sachs macro trader Mike Novogratz, has revealed that it lost $41 million in the third quarter of 2018 in an official filing. According to a Bloomberg report on November 29, 2018, the firm’s total realized and unrealized losses totaled to a whopping $136 million for the first nine months of the year.

Similar to most other cryptocurrency-based businesses, Galaxy Digital Holdings said that it lost numerous bets on Ethereum, Bitcoin and Ripple’s XRP.

In its report, Galaxy Digital said that poor pricing data, lack of trading volume and a weak business sense were all factors to blame for the company’s misfortune.  They wrote, “While we continue to improve and strengthen our trading business, lack of overall trading volume in cryptocurrencies has been a headwind.” However, the firm has still not proposed a remedy to its customers and shareholders. This is likely why Galaxy Digital’s shares have dropped by around 10 percent over the past 24 hours.

Making matters worse is that the firm’s report only includes financial figures until the third quarter of 2018, specifically September 30. Given that Bitcoin, and the rest of the cryptocurrency market, has lost over 30 percent of its valuation in the past week alone, it is rather unlikely that Galaxy Digital Holdings will be able to make an emphatic comeback before the year is over.