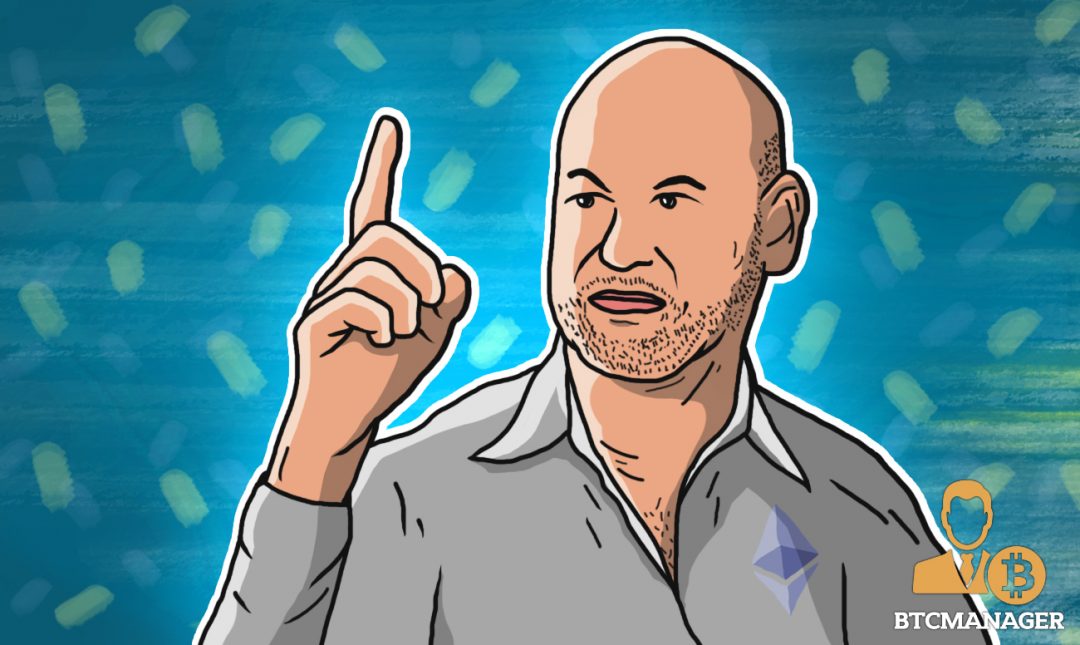 Ethereum co-creator Joseph Lubin said there’s certainly “irrational exuberance” in the ongoing ICO craze. Yet Lubin was also optimistic, arguing ICOs are so promising that they are here to stay.

In a November 9 interview with CNBC, Ethereum’s co-founding developer Joseph Lubin mused on the status of the Initial Coin Offerings (ICOs) marketplace as it stands today.

Lubin was fair, noting that there has been a great deal of cavalier speculation going on in the space, but he was also adamant in his position that such irrationality was the direct result of the exciting possibilities of the technology ICOs can bear:

“There’s certainly some irrational exuberance in the space, it’s such a profoundly powerful technology that people are excited about it and I think that that’s what’s driving this rush into the ecosystem.”

But Lubin was also clear that things would likely get worse before they get better.

The irrationality that defies the ever-growing ICO craze will continue accordingly in the short- and mid-term, as “People tend to, or groups of people tend to, operate in fear and greed cycles, and I think we are going to see that,” Lubin said. He added, “I think the growth in the ecosystem is going to continue quite dramatically.”

And where does Lubin see the ecosystem growing the most? Tokenized securities.

This is simply to say that, in the future, Lubin envisions launching their own personal ICOs, tokenizing themselves, as it were, whether such tokenizations are intended to pay for graduate school, start a non-profit foundation or any other similar kind of use cases.

“I think token launches, which are nonsecurity tokens, as well as tokenization of securities will be a huge paradigm,” Lubin concluded.

Buterin Comments On ICOs at Devcon3

Ethereum’s other co-founder, Vitalik Buterin, also recently chimed in on the ICO craze, remarking during the waning days of Devcon3 that “I’m concerned a lot of these token models aren’t going to be sustainable.”

For his part, Buterin envisions a future wherein smart contracts turn ICOs into layered processes in which rounds occur after certain development milestones have been reached.

The biggest problem Buterin sees now is ICOs raking millions of dollars’ worth of crypto without having a minimum viable product (MVP).

He argues for the implementation of investment protection mechanisms:

“The token models we have right now are lopsided and give skewed incentives. The worst part is the front-loading. Basically getting $140 million before you have a product. The right way to do that is to come up with a mechanism that either splits the ICO up across rounds or has a mechanism where if it doesn’t go well people can get refunds or anything similar.”

And yet, as the visionary behind the number two cryptocurrency by market capitalization right now, Buterin knows better than anyone the challenges inherent to bringing cryptoassets public.

“The Economist” Comes Out in Support of ICOs’ Promise

In a surprise op-ed, the editors at the well-established publication The Economist came out, like Lubin, in favor of the revolutionary changes ICOs can bring about.

Readers would expect the editors here to take a more traditional, conservative approach to the so-called ICO “bubble.”

Instead, they took the opposite position, arguing that ICOs may very well soon change the way companies are created going forward:

“ICOs may also give rise to new forms of the firm: because founders, employees, and users hold coins, everyone has an interest in seeing their network grow, as this will drive up the value of the token. Enthusiasts say that these ‘crypto co-operatives’ combine the advantages of a firm—lower transaction costs, aggregation of capital—with a [decentralized] structure that means no one controls it or the data it holds.”

Altogether, there is no ignoring the fact that ICOs are going to play a more significant societal role in the years ahead.