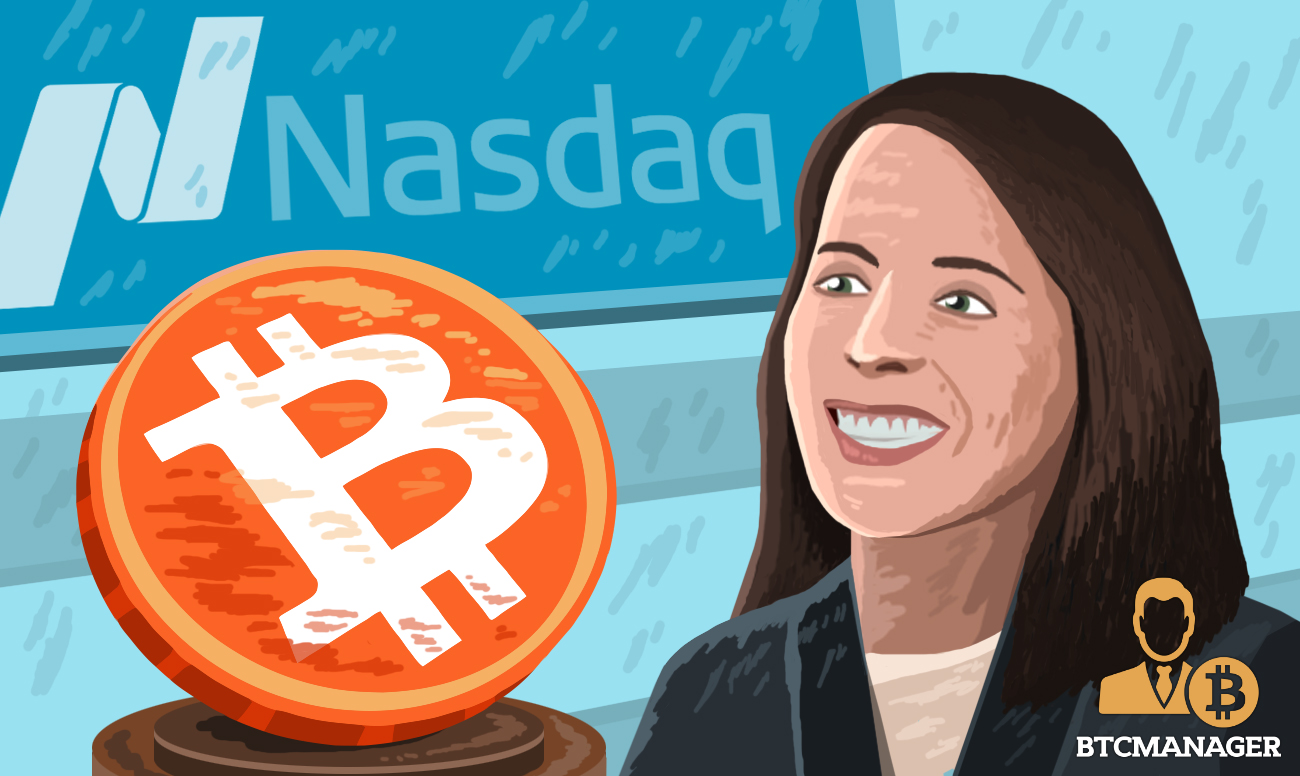 While business moguls like Warren Buffett, Charlie Munger, and others think bitcoin is worse than trading “freshly harvested baby brains” and would, therefore, have a terrible ending, CEO of Nasdaq Adena Friedman firmly believes cryptos are the future of finance. And she’s not ashamed to let the entire world know her stance on blockchain-based virtual currencies.

In an interview with CNN on May 9, 2018, the Nasdaq chief declared she was quite confident that distributed ledger technology (DLT), as well as its digital currencies, will be very instrumental in the economy. The CEO reiterated that blockchain technology and cryptocurrencies are very robust agents of change as such, her organization will wholeheartedly embrace the revolution to ensure it keeps succeeding.

“We see technology as a relentless change agent and our job is to embrace that change, to bring it to the industry, and make it so that our industry continues to be a very successful industry in the next decade or even beyond that.”

Nasdaq has been nursing the idea of launching its own cryptocurrency futures for quite some time now. In January 2018, Friedman confirmed that the firm was looking toward establishing a “total return futures” which will be more of an investment than just a tracking stock.

“We are continuing to investigate the idea of a cryptocurrency futures (contract) with a partner and we continue to look at the risk management around that, making sure we are putting the right protocols in place, making sure there’s proper demand, and that the contract is different from what’s already out there,” she said.

The former managing director and CFO of Carlyle Group also noted that integrating blockchain technology into traditional finance systems would help these organisations cut costs while dramatically reducing the risks involved in their operations.

Cryptos are the Right Next Step for Currency

On May 2, 2018, BTCManager reported that the Nasdaq boss is on the same page as the SEC chair, Jay Clayton, as she also believes that ICO-generated tokens are securities and must, therefore, be regulated as securities.

Notably, Friedman also told CNN that cryptocurrencies are the “right next step in the space of currency,” adding that some of the altcoins currently on the market may still get crushed by regulation.

But regarding which cryptos will last the longest and end up the winner, she said, “the jury is still out on that.” But the Nasdaq chief did state that cryptocurrencies can become a global payment system that is “more efficient than what we have today.”

More Blockchain Testing on the Cards

On April 25, 2018, Friedman stated that Nasdaq could become a cryptocurrency exchange in the near future once the nascent digital currency industry gets regulated. The successful business person has also hinted that the company would integrate blockchain technology into its markets to test the effectiveness of DLT.

“The first uses of the blockchain will be in the less regulated markets, less efficient markets, more bespoke markets. Test it out, show that it works, demonstrate the efficiency in the Nasdaq private market or in the fund industry,” Friedman enthused, adding it requires cooperation, which will be incentivized once people know the technology works.

Friedman has said it all. Blockchain and cryptos are the next best steps, but in the long run, many more coins will fall under the sledgehammer of regulation. At current, there are more than 1,500 cryptocurrencies on the market and how many of them will remain in the coming years is yet to be seen.