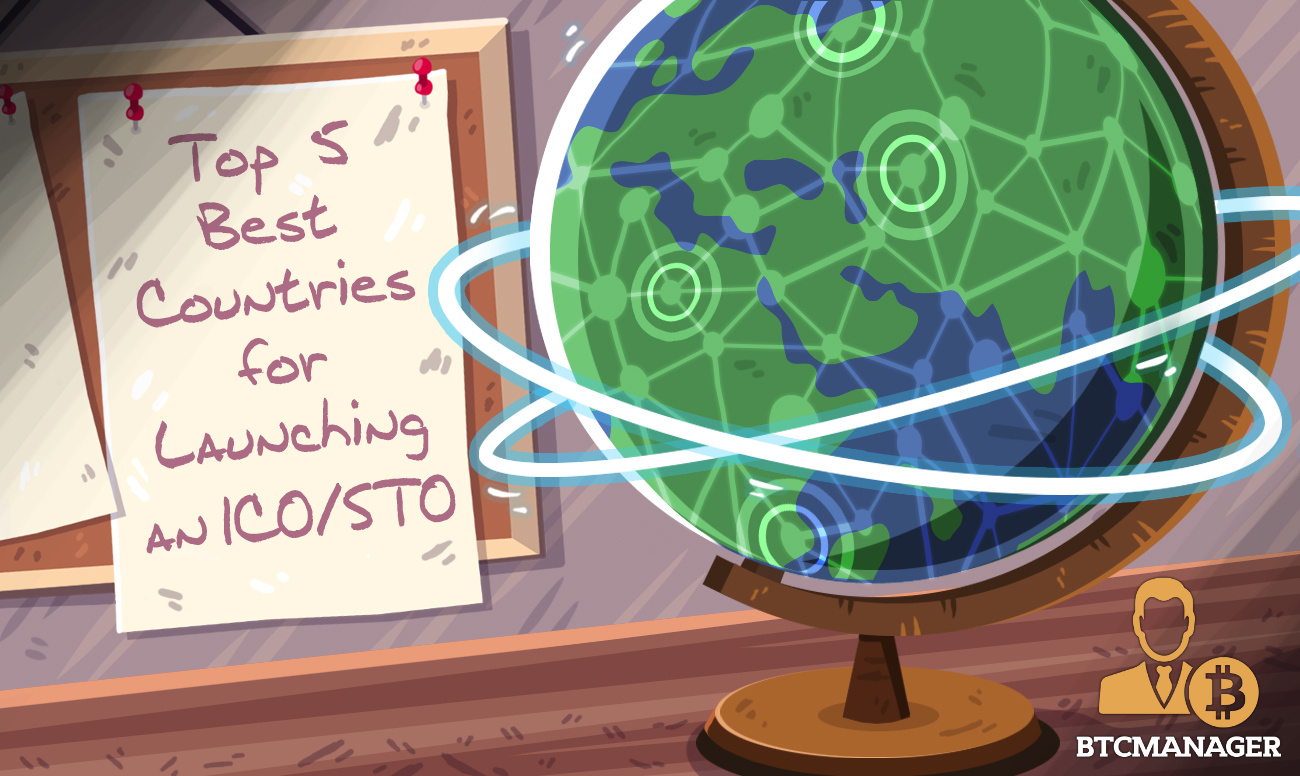 If one is planning to launch an ICO or an STO to fund a startup, one of the seemingly unconnected factors that may affect the failure of success of the token sale is the country in which founders are basing their venture.

In this article, readers will discover the top five best countries to launch an ICO or STO.

ICOs have made it possible for startups to circumvent the complex and mostly unattainable funding models employed in the traditional financial markets.

However, during the ICO boom of 2017, a number of jurisdictions introduced regulations designed to protect consumers from scams populating the ICO market. Unfortunately, the success witnessed by some blockchain-based startups in their crowdsales led to unscrupulous parties launching ICOs with the sole intent to defraud investors.

Following the regulatory response to widespread scamming facilitated through the ICO funding model, some countries became unfavorable for this approach. The regulatory environment of a country of origin will, therefore, likely have a significant impact on the failure or success of a crowdsale.

With this in mind, it is imperative to carefully consider the jurisdictions with the most favorable climate for holding an ICO or STO. While the regulatory environment is an important factor in this decision, other factors such as taxation structures, set up costs and availability of skilled labor are other vital aspects to consider.

Switzerland is one of the most favorable jurisdictions to conduct an ICO or STO. While the European country has imposed some regulations over these funding models, it remains committed to keeping the regulatory climate attractive to the blockchain sector.

The Swiss government oversees ICOs and STOs through its regulatory body, the Financial Market Supervisory Authority (FINMA). Before holding an ICO, a startup must register with the regulator after which FINMA decides whether the token issued is a payment, asset or security. The most regulated token is the security token which is governed by Swiss security law. Moreover, all startups holding ICOs or STOs must adhere to KYC and AML regulations defined by the country.

Switzerland’s Canton of Zug has lovingly been dubbed the “crypto valley” in a nod to the startup-friendly Silicon Valley in the U.S. The region is very friendly to the blockchain sector. It even allows companies to remit startup costs in bitcoin and ether, which may ease the initial process.

Additionally, the country, in general, has an attractive taxation setup. Companies are liable to pay anywhere between the mandatory one percent up to a higher limit of 35 percent. The combination of these factors makes the country attractive to a number of blockchain-based projects. For instance, the Ethereum foundation, the non-profit organization behind the Ethereum network, is based out of Zug.

Malta has adopted a fairly lenient stance on ICOs. As long as the token issued in the sale is a utility token, the sale is free to continue without interference from the authorities. For platforms whose tokens fall outside these realms, the European country has laid out clear laws to follow. These laws are designed to support innovation, however, and many startups will find their stipulations reasonable and easy to adhere to.

The country also has packages designed to attract startups to it. Some appealing features include its tax refund policy which may result in the reduction of the 35 percent tax rate levied on corporates to zero.

Additionally, the European country has created a specific body to provide regulatory guidance. For startups looking to hold an ICO while adhering to all relevant rules, reduce their tax and legal burdens, this jurisdiction is very accommodating.

As an added advantage, there are a number of companies set up in the European country solely to help startups launch their ICOs in accordance with the regulations while optimizing all other relevant features. This means startups may find it easier to launch their crowd sale on the small European Island nation.

The Cayman Islands is a favorite for many startups looking to hold their crowdsale. The country is known for being conducive to high-value offshore businesses in many industries and has broadened to include the blockchain sector. As a result, a number of blockchain-based startups have held their ICOs in the Cayman Islands. For instance, it is home to the most successful ICO ever held.

The country is attractive for ICOs because its definition of securities is not comprehensive and encompassing. This means that most ICOs can escape the security tag and can proceed without much oversight from the regulator.

Additionally, the Cayman Islands is famed for its attractive tax structure. The only tax levied within the jurisdiction is stamp tax which is relevant to the real estate market. Other than that, companies are not on the hook for any duty. For startups looking to hold their ICO, the lack of taxation ensures they have access to all their funds to develop their platform.

An important consideration to make is that the Cayman Islands is a tiny country and lacks the necessary skilled labor to service startups dealing with sophisticated technology such as that of the blockchain sector. Thus, a startup will have to set up offices elsewhere and/or build up a team that works remotely to deliver on the company’s vision.

Singapore is a very conducive place to hold an ICO. To launch an ICO in the Asian country, a startup must register as a foundation and comply with the necessary KYC and AML regulations after which it is free to hold its crowdsale.

If the token is not a security, the legal requirements are quite small. However, if a token is deemed a security, then it must adhere to the nations security laws. Despite this, Singapore is still very popular with startups holding their ICOs because its rules are fair and do not stifle innovation.

Furthermore, tax in Singapore is a flat rate of 17 percent for corporates with no additional gains tax. Lastly, startups looking to set up a home base there will have access to a large pool of tech-savvy professionals familiar with blockchain technology. This negates the costs associated with moving talent from other countries.

Another important aspect to consider about the Asian country is its the ease of doing business. Singapore is ranked highly on the list of countries operating at the cutting edge of technology thus all of the amenities available in the world’s most developed nations are available in the country.

Additionally, the government has provided a number of programs designed to spur on innovation and further cement the country‘s spot in the list of innovative nations. Incubation programs, free consultancy services as well as management training are some of the government-funded programs available for startups looking to hold their ICO in Singapore.

Despite its stricter regulations, the United States still holds the number one spot in terms of highest number of ICOs held within its borders. However, following the U.S. Securities and Exchange Commission’s (SEC) negative stance on ICOs, the Security Token Offering (STO) has become a popular move for many crypto startups based in the country.

All startups looking to hold either and ICO or STO must first register with the SEC and comply with the regulations relevant to them. Additionally, depending on the state where the startup is based, there may be more regulations to follow. However, if found to be in contravention of any regulations, the SEC may shut down your token sale and initiate prosecution.

On the plus side, investors from the ICO are not able to participate in token sales based outside the country. As a result, startups may benefit from the somewhat starved investor pool. The tax rate is 21 percent if the startup is registered as an LLC but there may be opportunities for further tax reductions.

Lastly, the U.S. has an active technology community with much of the world looking to it to set the tone for a number of sectors, and the blockchain industry is no different. Firms can pull from a large pool of intelligent and qualified individuals to work for them. A startup that manages to comply with all regulations and hold its ICO or STO in the U.S. and can capture the attention of a dedicated community will likely go on to do well.

Finally, the U.S. is also home to the largest hedge fund investor base in the world. Hence, it is the jurisdiction with the best access to institutional investor money.