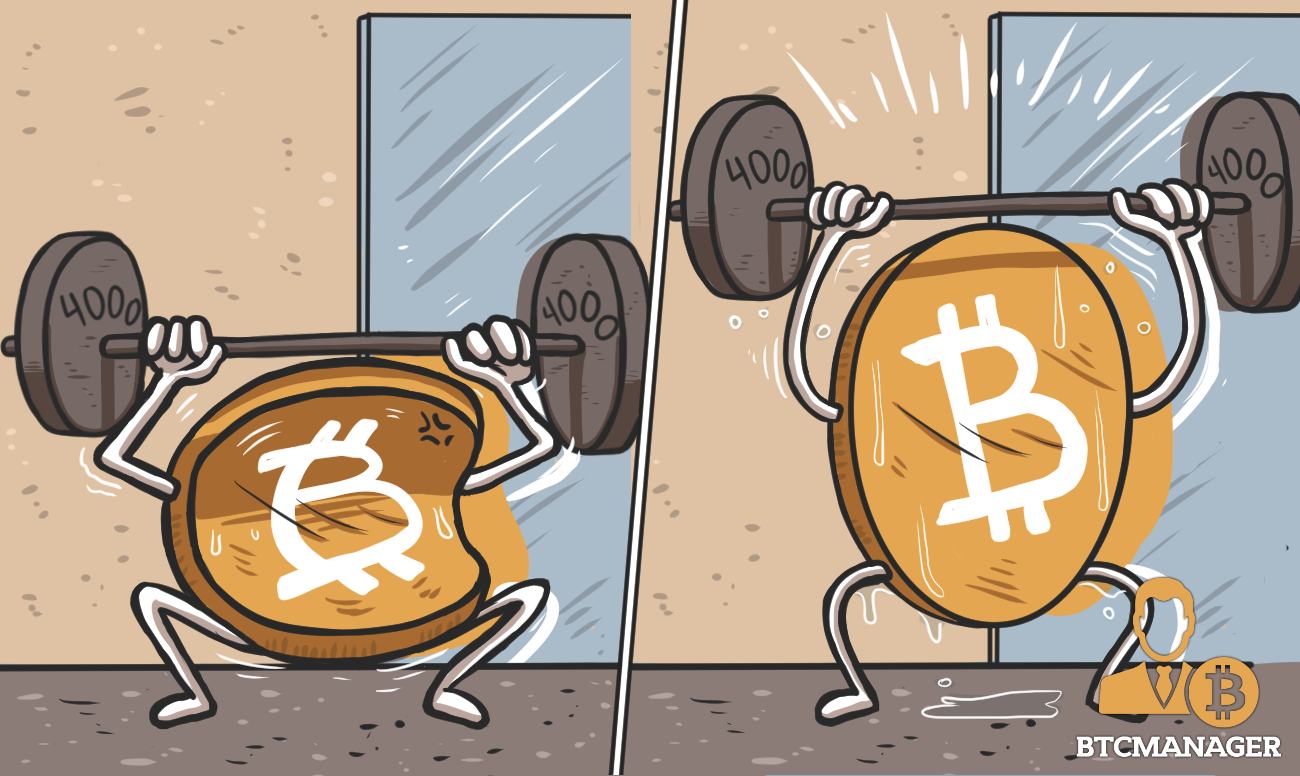 The price of bitcoin traded sideways in the first few days of 2019. The price fluctuated between $3,707 and $3,947 and closed the week effectively unchanged versus last week’s close.

As expected, news flow over New Year’s was muted as the first week of January is still a holiday week for most businesses as investors seem to have taken a wait-and-see approach on how the first few trading weeks of the year will unfold before placing large buy orders.

The biggest news of the week has been the announcement from Bakkt that it raised $182.5 million for its platform and Overstock’s intention to pay part of its taxes in bitcoin using OhioCrypto, a state-sponsored platform which lets businesses remit taxes using cryptocurrency. Both headlines show that there is ample support for bitcoin in the U.S., both as a currency and as an investment asset.

Ethereum, on the other hand, got off to a better start. Driven by the upcoming release of the Constantinople upgrade, the price of ether (ETH) has experienced a substantial rally from a low of $83 in mid-December to currently trading at $158. Week-on-week, ETH rallied by 15 percent.

The remainder of the altcoin market showed a mixed picture with several winners and losers to start off the new year.

According to a Medium post published by Bakkt CEO Kelly Loeffler on December 31, 2018, the much-anticipated Bitcoin contracts trading platform has successfully raised $182.5 million during its first round of funding.

Bakkt’s first fundraising round saw participation from companies like the Boston Consulting Group, CMT Digital, Galaxy Digital, Intercontinental Exchange (ICE), and Microsoft’s VC arm, among others. The post by Loeffler reads in part:

“Our work today is centered on driving institutional access for digital assets, along with merchant and consumer uses, and we’re already expanding on this vision, collaborating with great companies like Starbucks in these efforts.”

The CEO of Bakkt also mentioned how the company’s COO Adam White and Loeffler are working on the platform’s roadmap for 2019, which includes offering the emerging industry’s first institutional-grade regulated exchange, as well as clearing and warehousing services for physical delivery and storage.

The exchange platform has already filed for regulatory approvals from the concerned government authorities. The platform is expected to go live in the last week of January 2019, subject to required approvals.

Overstock Wants to Pay its Ohio Business Tax in Bitcoin

According to Fortune, online retailer Overstock announced that it would be paying a part of its Ohio state business tax using bitcoin. This would make the company the first to use a first-of-its-kind payment portal called OhioCrypto, a state-sponsored platform which lets businesses remit taxes using cryptocurrency.

Ohio Treasurer Josh Mandel told Forbes that the program was created to make paying taxes more convenient to businesses. He also added that it could help brand the state as a leader in the adoption of cryptocurrencies and blockchain technologies.

The Ohio Bitcoin initiative only covers 23 types of business taxes, including those for fuel and tobacco products. Overstock would be paying its Commercial Activity Tax, or CAT, which applies to businesses with over $150,000 in receipts, Mandel explained.

In a bid to curb the activities of bad actors who use cryptocurrencies to facilitate illicit gains such as terrorism financing, Irish authorities are set to approve the Criminal Justice Money Laundering and Terrorist Financing Amendment Bill 2019, according to The Irish Times report on January 4, 2018.

The Irish Cabinet has reportedly greenlighted the Criminal Justice (Money Laundering and Terrorist Financing Amendment) Bill 2019 which seeks to put in place stricter rules to govern cryptocurrency exchanges, bitcoin-linked businesses, as well as other financial institutions in the state.

Per sources close to the matter, the primary goal of the bill is to give effect to the Fifth European Union (EU) anti-money laundering regulation and strengthen existing legislation.

As reported by BTCManager earlier in July 2018, the Fifth EU Anti-Money Laundering Directive went live on July 9, 2018. The regulation is focused on bringing transparency and eliminating the risks of terrorist financing in the financial system, among other objectives.

The law requires cryptocurrency exchanges and other businesses in the finance sector to carry out adequate customer identity verification procedures and more. If the bill gets approved in Ireland, all crypto operators, banks, and others would be required to carry out more robust due diligence before accepting new customers. Similarly, anonymous transactions will no longer be tolerated.

Following many of the governments around the world, South Africa has recently gathered a working group to research digital currencies and crypto assets to establish suitable guidelines reported Business Live, a South African news agency.

According to the South African Prime Minister, Tito Mboweni, the move comes as a response from the government to find a comprehensive view of the sector that would help the government find appropriate legislation to promote, rather than stifle, the ecosystem.

Tito Mboweni expressed his views in a written answer to a parliamentary question by Freedom Front Plus MP Wouter Wessels. According to the finance minister, the working group includes representatives from the Financial Intelligence Centre, Financial Sector Conduct Authority, Treasury, the Reserve Bank, and the SA Revenue Service (SARS).

“It is anticipated that, following broad industry comment and participation, the crypto assets regulatory working group will be ready to release a final research paper on the subject during the course of 2019.”

A European Union-certified cryptocurrency exchange is looking to change the way stocks are traded around the world, adding fuel to the fire that is the tokenization of real-world assets.

According to Bloomberg, DX.Exchange, an Estonian exchange with offices in Israel, plans on offering digital tokens based on shares of ten different Nasdaq-listed companies. The exchange also reportedly plans on expanding to the New York Stock Exchange, with Tokyo and Hong Kong to follow.

The exchange will offer digital stocks based on actual shares that MPS MarketPlace Securities Ltd., the company’s partner, has bought. MPS MarketPlace is licensed by Cyprus’s main financial regulator and will hold the stocks on behalf of the token owners. The shares will then be stored in a segregated account, separated from any of the company’s internal funds.

Segregating the funds is meant to serve as a safeguard against any issues the company might face. MPS will also fall under the supervision of the Cyprus Securities and Exchange Commission, while DX.Exchange will abide by European Union regulations, adding another layer of protection for their customers.

DX’s Chief Executive Officer Daniel Skowronski told Bloomberg that the company is licensed by the Estonian Financial Intelligence Unit and is fully authorized to operate in the European Union. “We saw a huge market opportunity in tokenizing existing securities,” he told the publication, adding that this would be the beginning of the traditional market’s merge with blockchain technology.

In a bid to formulate amenable policies to foster cryptocurrency adoption and protect consumers from bad actors, New York state has created a cryptoassets task force.

The group is made up of technologists, cryptocurrency holders, institutional and small investors, academics, and blockchain-linked businesses, according to a Facebook post on January 3, 2018, from Clyde Vanel, Assemblymember for the 33rd District of the New York State Assembly & the Chair of the Subcommittee on Internet and New Technologies.

Per sources close to the development, New York has become the first state in the United States to put in place a digital assets task force to study how to regulate, define, and leverage the burgeoning digital asset class in the best possible way.

According to Vanel, prior to the formation of the committee, the governor of New York, Andrew Cuomo, signed the Digital Currency Study Bill A8783B/S9013 into law to give the task force a solid footing.

It’s worth noting that the cryptocurrency task force act was introduced last year by Senator Parker. The statute authorizes the Department of Financial Services (DFS) to establish a cryptocurrency committee to “provide the governor and the legislature with information on the potential effects of the widespread implementation of cryptoassets on financial markets in the state.”

Importantly, the act also seeks to review the impact of the New York BitLicense on the use of cryptoassets and “make recommendations to further utilize blockchain-based digital assets in the state.”