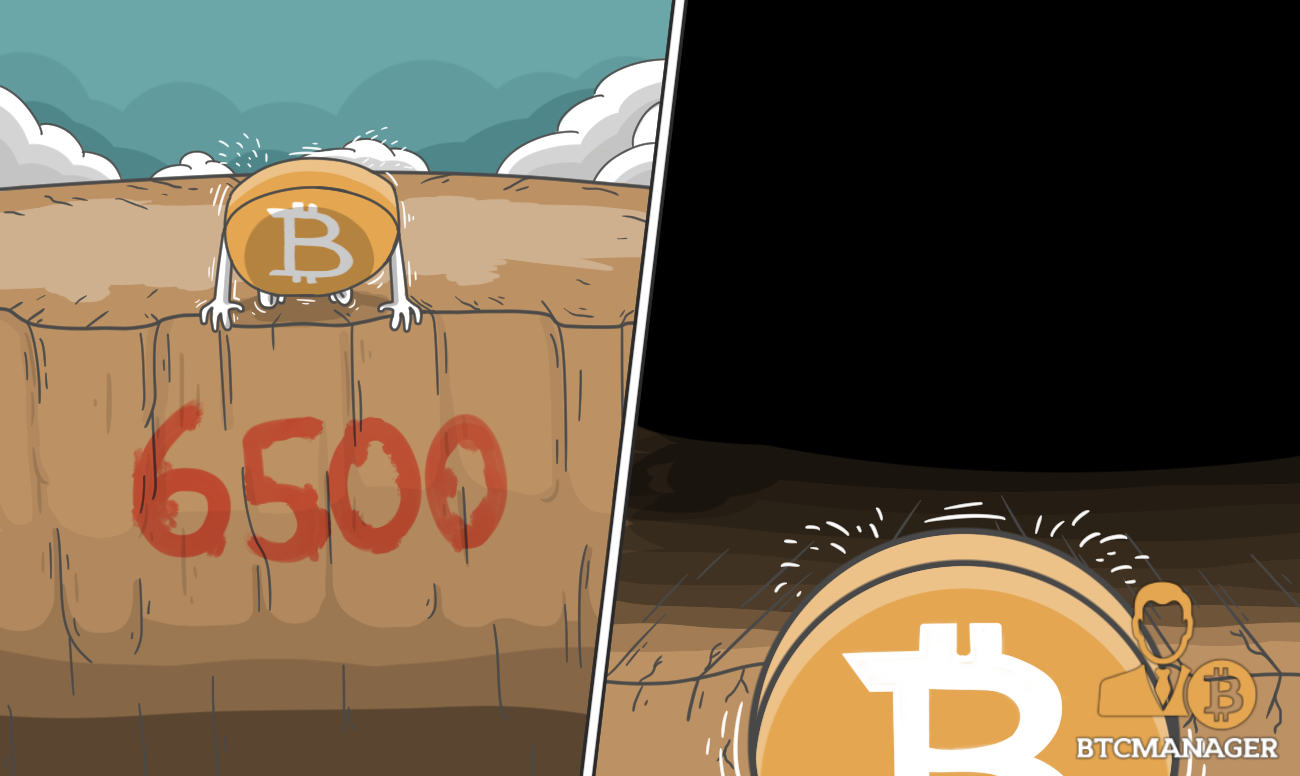 Bitcoin Moves Below $6,500 Suggesting That New Lows May Be on the Horizon: BTCManager’s Week in Review August 13

The price of bitcoin dropped by almost ten percent week-on-week, continuing last week’s decline, suggesting that we may not have seen the bottom of this year’s bear market yet.

Last week, the price of bitcoin declined by 15 percent despite bitcoin-positive news flow. This week, bitcoin’s price sentiment has been dampened by the SEC’s decision to delay its approval or disapproval of the first-ever publicly-traded Bitcoin ETF.

After “crypto mum,” SEC Commissioner Hester Peirce, urged her colleagues to reconsider their disapproval of the Winklevoss ETF in a written statement, bitcoin investors were optimistic about the VanEck SolidX Bitcoin Trust.

The altcoin market, overall, took a beating, which can be viewed by the performance of the top 20 coins and tokens, which dropped by around 20 percent on average versus last weeks close.

This week’s contributions have been provided by Aisshwarya Tiwari, Cindy Huynh, Jefferson Nunn, and Priyeshu Garg.

The US Securities Exchange Commission (SEC) released an official document on August 7, 2018, which outlined their decision to defer the listing and trading of a Bitcoin exchange-traded fund (ETF) until September 30.

According to the official document, the SEC has until September 30 to “approve or disapprove, or institute proceedings to determine whether to disapprove” the proposed rule change. The fund the US SEC is considering is from the investment firm VanEck and the financial services company SolidX Bitcoin Trust, which will list on the CBOE BZX Equities Exchange. The original deadline will expire next week, however, with the new delay, the SEC now has just under two months to make a decision.

Everipedia Chooses EOS Over Ethereum Blockchain Ahead of Launch

Everipedia, the decentralized encyclopedia application, has abandoned the Ethereum blockchain to launch on instead. Everipedia’s developers believe that building the platform on Ethereum is “infeasibly difficult” due to its existing scalability issues.

According to The Next Web, Everipedia wants to usher a new database of information that is genuinely open and free of censorship. Although Wikipedia may have had a similar goal, the Everipedia developers noted that Wikipedia currently suffers from a lot of regulations and overseers who make it “attractive only to a relatively small portion of potential encyclopedia writers.”

There is, however, a robust relationship between the two organizations. The co-founder of Wikipedia, Dr. Larry Sanger, is also the chief information officer of Everipedia. The idea is to leverage off EOS’s decentralized blockchain. The Next Web is however skeptical and concerned as to how much censorship resistance can genuinely occur.

Australia’s largest bank, Commonwealth Bank of Australia has been mandated by the World Bank to issue bonds created exclusively on blockchain platform, right from their creation, allocation and transfer to other potential bondholders. The announcement was made in a press release published on August 10, 2018, on the official World Bank website.

The new global bond officially called The Blockchain Offered New Debt Instrument (Bond-i) will be developed and distributed exclusively on a blockchain platform under the joint purview of the World Bank and Commonwealth Bank of Australia. Operations on the blockchain will be officially launched after consultation with all the investors involved. Some of the investors with a vested interest include Northern Trust, QBE Insurance and Treasury Corporation of Victoria.

Both the parties, i.e., World Bank and CBA mutually agreed to use a private Ethereum blockchain as the base for bond-i. However, CBA also stated that considering the rapid growth of other blockchain platforms, it “remains open” to alternatives with better functionality.

ICOs Raise over $18 Billion Due to Wealthy Investors’ New Interest

We are barely out of the first half of 2018, and already ICOs have raised almost five times more than they did last year in total. August 8, 2018, reports from CoinSchedule claimed that this is due to a new trend in ICOs: Target the rich.

Initially, ICOs were to be for average joes rather than the institutional Wall Street investor. More importantly, the fundraising mechanism hoped to exclude financiers, intermediaries, Washington, or the wealthy in general.

Now, however, it would seem that the revolutionizing trend is emptying the pockets of a different kind of demographic. Telegram’s ICO, for example, raised around $1.7 billion, which inspired the company to give up on a public sale. Many other among the most successful ICOs of 2018 did not include public sales at all. Instead, they raised their hundreds of millions entirely through private sales.

There is a reason for this, of course, as it’s merely more convenient for these startups to do things this way. Their goal is to raise money, no matter where it comes from. Due to that attitude, many fear that cryptos are slowly turning into traditional venture investing.

2018 arrived, the ICO market became a trend, instead of a part of the “crypto rebellion,” and things became infinitely more complicated. Regulators around the world tried to put leashes on such projects, impose various rules, new laws, and alike. Registrations grew necessary, accusations of tokens being securities were all around the crypto space, and ICOs had to start employing lawyers to get a chance of survival.

Per a report published on August 8, 2018, the Japanese Financial Services Agency (FSA), which is also Japan’s premier financial regulatory body, is planning to update its existing regulatory framework for bitcoins and other cryptocurrencies. This is being done to tackle the rampant frauds and malicious attacks on cryptocurrency exchanges.

The infamous attack on Coincheck in January 2018 resulted in a theft of almost half a billion dollars is speculated to be a significant reason for the planned strict crypto regulations. It was a prime example of inefficient management of customer’s crypto assets by exchange platforms. According to a report on the local media outlet Japan Times, the new regulations will primarily be introduced to curb speculative crypto investments.

Brave browser is set to launch an ambitious new function that allows Twitter and Reddit users to tip other posters on those platforms through the browser instantly. A CNET story on August 8, 2018, reveals that the ad-blocking browser is trying to completely upend the established order of internet publishing revenue generation by extending the instant micropayments feature currently offered to YouTube content creators to regular posters on social media platforms.

According to the report, the extended micropayment functionality will go live sometime in Q4 2018. Under the framework, users who use the payment system will be able to receive payments from other users if their content is sufficiently interesting or useful. Tippers will then have the option to notify the community that they tipped through a tweet or a Reddit post.

If successful, such a model is likely to spark the sort of disruption that the Brave Attention Token (BAT) promised at launch. Currently, internet publishing platforms are dependent on user content for survival, but the financial relationship is non-symbiotic, with websites keeping all advertising revenue and additionally harvesting user data for marketing and microtargeting purposes.

Coinbase, the world’s largest digital asset exchange, announced on its official blog that it will enable live trading and will allow a higher default limit to most of its users. The official online announcement was made on August 7 and stated that traders would be able to trade cryptocurrency immediately after making a purchase. This is a massive reduction in waiting time from five days to just one. Also, the default limit for Coinbase users has been increased to $25,000 per day. The services are expected to be made available to the public over the coming weeks.

Coinbase also tweeted that after last week’s successful testing for Ethereum Classic (ETC), Coinbase Pro will now support inbound ETC transfers. The blog post states that Coinbase will initially launch ETC support on its exchanges, followed by support on the website, once Ethereum Classic creates enough liquidity in the crypto market. The time frame is estimated to be 1-2 weeks. The support for ETC is planned to be implemented in four phases: transfer-only, post-only, limit-only, and full-trading mode.

Coinbase further mentioned on its blog that continued demand for Ethereum Classic from customers encouraged the crypto exchange to list ETC on the platform. Last month, Coinbase announced that the exchange is considering adding some other crypto tokens to the exchange platform as well.