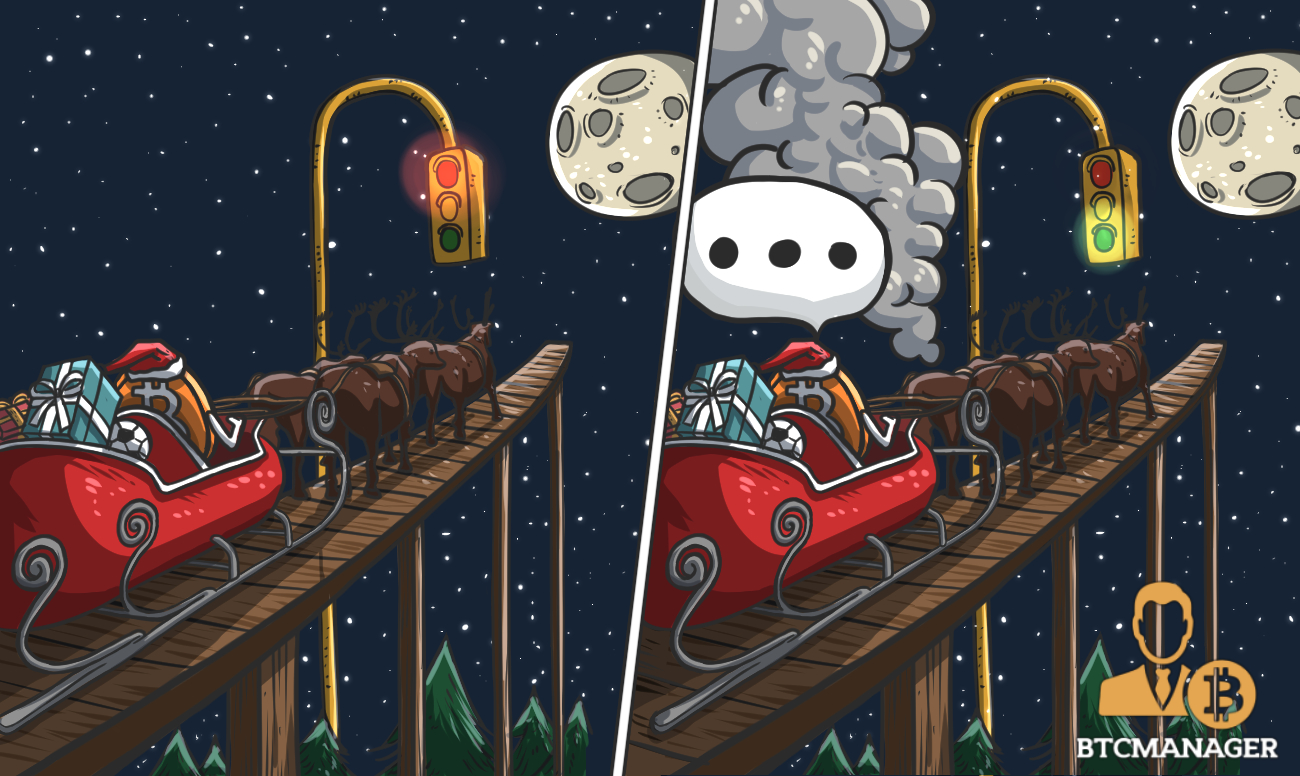 For investors who were hoping for a year-end rally to take out of a dark red year in the crypto markets disappointment looks imminent. The price of bitcoin dropped by another five percent week-on-week to continue its decline since mid-November 2019.

As a result, more and more bitcoin miners are switching off their machines as the digital currency is trading at a level where it is no longer profitable for operations that do not have access to cheap electricity and do not possess the economies of scale to weather this bear market.

Interestingly, despite the soul-crushing bear market that we have experienced since the start of the year, there has been a substantial amount of good news for bitcoin, both as a currency and as an investment class and this week have been no exception.

Leading U.S. exchange Gemini has launched the mobile app versions of its trading platform for iOS and Android, the Gibraltar Blockchain Exchange announced insurance coverage for digital assets, and a UK MP said that citizens should be able to pay for taxes and bills in cryptocurrency.

Moreover, the CFTC announced that it is looking to gather public feedback to gain a better understanding of the Ethereum network. This shows that the futures and commodities regulator is keen to learn more about cryptocurrencies to fine-tune its regulatory approach towards crypto as opposed to taking old regulation made for the legacy financial system and attempting to re-write it for crypto.

Additionally, Germany’s second largest exchange, Boerse Stuttgart, announced that it would launch a cryptoasset exchange in partnership with Solarisbank in the coming year.

The altcoin market, as expected during a down week for bitcoin, also suffered losses. In the top 20 digital assets, market prices have dropped between one and 26 percent, with both bitcoin cash (BCH) and bitcoin SV (BSV) highlighting themselves as the biggest losers of the week.

As we are approaching the end of the year, it seems like big investors are scooping up bitcoin for “cheap” while retail investors who joined the party in late 2017 are healing their wounds after a dreadful 2018.

The total hash rate of the Bitcoin network has fallen by 31 percent since November, representing around 1.3 million Bitmain S9 miners that have been turned off as they struggled to stay profitable in the bear market, BitMex revealed in a report on December 10, 2018.

The report provided insight into the impact the recent price crash had on miners and concluded that an overwhelming majority of them are struggling. The Bitcoin hashrate has fallen around 31 percent since the start of November 2018, BitMex found, which is equivalent to around 1.3 million Bitmain S9 machines. During the same period, the price of Bitcoin has also dropped by approximately 45 percent.

Due to a delay in the way the difficulty adjusts to the market, the drop in incentives was even more significant than the fall in the Bitcoin price: 21.8 percent fewer blocks than the expected 144 per day were found in the six days ending on December 3. The report stated that this drop was a consequence of miners leaving the network at large.

The U.S. Commodity Futures Trading Commission (CFTC) is looking to the public for further feedback and understanding concerning the cryptocurrency industry, especially regarding ether and its uses on the Ethereum network. According to the press release published on December 11, 2018, the CFTC is confident that the comments and information provided by the public will significantly benefit LabCFTC, the CFTC’s fintech initiative.

The U.S. Government will publish the Request For Information (RFI) concerning ether and the Ethereum network on the Federal Register. The CFTC is seeking feedback on many aspects related to the cryptocurrency industry.

These include the underlying blockchain technology, new opportunities, emerging risks, mechanics, use cases, and markets associated with the Ethereum network.

The CFTC is keen to understand the similarities and differences between ether and other cryptocurrencies like bitcoin, as well as specific opportunities, risks, and challenges concerning Ethereum’s native token. Any information or comments concerning the Ethereum network needs to be received within 60 days after the publication appears in the Federal Register.

In a bid to protect itself against hacks, heists and all unforeseen events, the GBX has purchased insurance with Callaghan Insurance, a Gibraltar-based insurer regulated by the Gibraltar Financial Services Commission (GFSC).

According to the press release, the insurance package covers all assets listed on the GBX Digital Asset Exchange (GBX-DAX) including the funds in both its cold and hot wallets. Although the crypto winter may be upon us, the truth remains that cryptoassets remain valuable and exchanges are still prime targets for bad actors looking to enrich themselves with ill-gotten money.

Against that backdrop, GBX’s move to get solid insurance coverage is undoubtedly a forward-thinking maneuver which only a few crypto trading venues have managed to achieve in recent times.

The GBX says the new insurance policy represents a significant milestone for it, adding that it further cements its status as a highly-reputed, institutional-grade crypto exchange focused on giving its clients the best at all times.

UK MP: “Taxes Could Be Paid in Cryptocurrency”

On December 10, 2018, a UK Member of Parliament (MP) spoke out in favor of cryptocurrencies, calling for colleagues to educate themselves further on the technology and, suggested they could be used to pay taxes.

According to an article published by UK media outlet the Daily Express, Eddie Hughes, an MP belonging to the Conservative party, who are presently in power, described himself as a “crypto enthusiast with amateur knowledge.”

Speaking with the publication, Hughes outlined his commitment to his work and had noticed an increase of discussion around the topic of blockchain and cryptocurrencies, and believes that “as MPs, we must understand it.” Hughes echoes sentiments found in the DAG Global/Deep Knowledge Analytics/Big Innovation Centrecollaborative report that detailed the UK blockchain and cryptocurrency landscape across almost a thousand pages.

SolarisBank Partners with Boerse Stuttgart, will Launch Cryptocurrency Exchange in 2019

Boerse Stuttgart, Germany’s second largest stock exchange, has reportedly partnered with fintech startup SolarisBank to develop a cryptocurrency exchange. In a press release issued December 12, 2018, SolarisBank said that the cryptocurrency trading platform is scheduled to release sometime in the first half of 2019.

While the platform will initially only support ‘established’ cryptocurrencies such as Bitcoin and Ethereum, the number of tradable tokens will increase in due time.

Boerse Stuttgart is Germany’s second largest stock exchange with a trading volume of $100 billion. The Stuttgart Exchange Group first revealed its interest in the cryptocurrency industry on May 17, 2018, when one of its subsidiaries, Sowa Labs, launched a zero-fee trading app named BISON. After launching its exchange, Boerse Stuttgart plans to develop an initial coin offering (ICO) platform for blockchain startups. These companies can eventually have their platform-specific tokens listed on the cryptocurrency exchange as well.

The CEO of Boerse Stuttgart, Alexandar Höptner, was quoted as saying: “With its combination of technology and banking expertise, solarisBank is a great partner for us to offer central services along the value chain for digital assets. SolarisBank’s Blockchain Factory [initiative] helps us take the cryptocurrency and token trading to a new level and set standards regarding transparency and reliability.”

Coinbase Empowers Venezuelan Families With Cryptocurrencies During the Xmas Period

Popular cryptocurrency exchange Coinbase recently donated $10,000 in ZCash (ZEC) to support the GiveCrypto.org project located in Santa Elena de Uairen by the Venezuelan border. According to Coinbase’s Medium blog post published on December 11, 2018, the digital exchange believes that donating cryptocurrencies will provide Venezuelan families many benefits which include cross-border accessibility, ease of payments, and access to real-time transfers.

The $10,000 ZCash donation will provide $1 worth of cryptocurrencies into the wallets of more than 100 families in the Santa Elena town every day for three months.