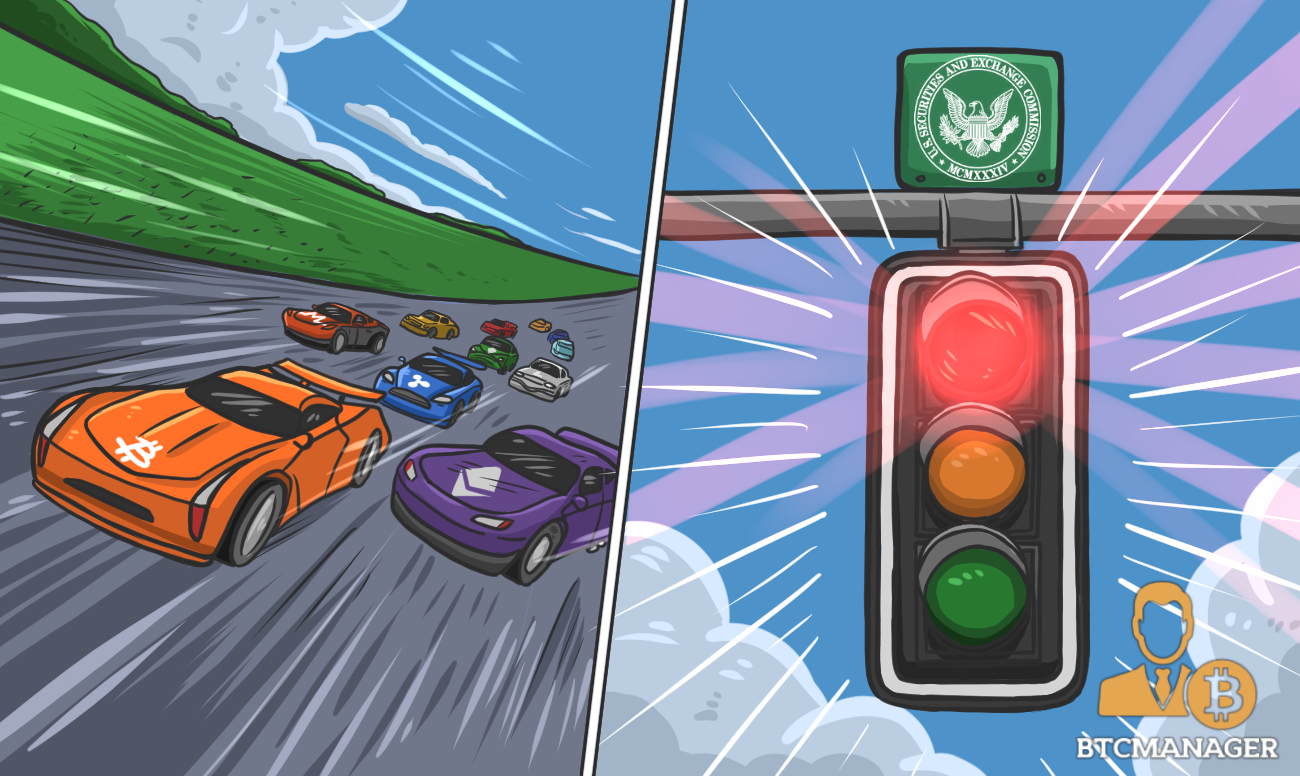 It has been a sobering week for crypto investors as the price of bitcoin continued last week’s decline to drop another ten percent versus last week’s close after a new study suggested that Tether (USDT) trading manipulated the bitcoin rally of late-2017.

Fortunately, for bitcoin and – especially ether – holders, the U.S. Securities and Exchange Commission (SEC) director William Hinman stated that the regulator does not consider decentralized cryptocurrencies such as bitcoin or ether as securities, which helped to stabilize the crypto market.

“Based on my understanding of the present state of ether, the Ethereum network, and its decentralized structure, current offers and sales of ether are not securities transactions. And, as with bitcoin, applying the disclosure regime of the federal securities laws to current transactions in ether would seem to add little value,” Hinman said.

However, he does consider the majority of ICO tokens as securities even if they pose as utility tokens. “Even digital assets with utility that function solely as a means of exchange in a decentralized network could be packaged and sold as an investment strategy that can be a security,” Hinman stated.

The price of ether jumped by over ten percent when the news broke as there was some concern among investors that Ethereum’s token could also be considered a security as it was launched through a token sale. Bitcoin also managed to recover some of its losses on the back of the SEC’s statements.

Hinman’s statement is price positive for decentralized cryptocurrencies, but negative for ICO tokens that were sold in the U.S. as “utility tokens” as this creates substantial regulatory uncertainty for the issuing entities in the near future.

This week’s contributions have been provided by Cindy Huynh, Priyeshu Garg, and Shaurya Malwa.

An official of the United States Securities and Exchange Commission (SEC) stated Ethereum displays none of the characteristics of traditional securities. Speaking at a cryptocurrency summit in San Francisco on June 15, 2018, SEC Director of Corporate Finance William Hinman clarified the commission’s position on the contentious issue.

Hinman stated the SEC has observed the use and behavior of bitcoin and ether and does not consider the digital assets under the classification of a “security.” His thoughts iterate on SEC chairman Jay Clayton’s June 6 interview with CNBC, where he stated bitcoin is the only cryptocurrency not classified as a security.

Though the difference between a product-backed token and a cryptocurrency is subtle, the difference in regulatory standards would pave the way forward for digital assets. Under the “Regulation D” framework, a security token is subject to corporate financial reporting standards and is obligated to submit information such as investor identities and transaction volumes periodically.

Under the SEC’s definition of a digital token, a product or service that makes use of a token to raise money through an ICO in exchange for promised functionality or financial returns is classified as a security, and is hence subject to Reg D. However, if a cryptocurrency offers no extra functionality or income potential except for the ability to carry out transactions, it is exempted from the rule.

According to a Security Boulevard report on June 13, 2018, over five percent of all Monero (XMR) has been mined using fraudulent tactics.

Palo Alto Networks researchers scrutinized 630,000 fraudulent instances of cryptocurrency mining and determined the mining pools and wallet IDs allegedly used by attackers. From the total, researchers noted 531,000 instances of mining XMR, making the privacy-centric protocol the most unfortunate victim of all observed cryptojacking.

In recent times, the digital currency has gained relevance in the darknet market due to its better anonymity features than pioneer bitcoin. However, the fame has attracted cybercriminals to conduct attacks on the Monero protocol, and its ease of mining with GPU devices adds to the charm (for hackers).

For the report, researchers extracted 2,341 Monero wallet IDs and matched them to the mining pools known to be used by mining malware. As the blockchain provides transaction data based on wallet IDs, researchers easily identified a total of 798,613.33 XMR mined by hackers, equivalent to $96.7 million at the time of writing.

A research study by a finance professor at the University of Texas John Griffin and co-author, graduate student Amin Shams, cleverly titled “Bitcoin Really Un-Tethered?” reveals the pioneer cryptocurrency’s price was artificially propped up at its peak in 2017 when it hit a record high of almost $20,000.

The authors suggest covert activities may have been used to inflate the price of not only bitcoin but also some other popular cryptocurrencies at their highest point in 2017.

Published on June 13, 2018, the paper questions how much of bitcoin’s triumph in 2017 pertained to secret practices of significant stakeholders, popularly known as “whales.”

The research paper alleges Tether transactions are linked to the 50 percent rise in bitcoin price and 64 percent in other cryptocurrencies.

Griffin has earlier brought attention to scams in financial markets and observed the inbound and outbound flow of digital tokens at Bitfinex was closely analogous with trading patterns. This led to the researcher believing Bitfinex was intentionally driving the cryptocurrency’s price up “in a coordinated” manner.

Established by an unknown 21-year old enthusiast, Satoshi’s Place demonstrates the power of microtransactions with the Lighting Network under the guise of an advertising space. Interestingly, the board resembles a graffiti wall instead of a marketing platform, additionally making for a source of entertainment.

Satoshi’s Place proudly wears its influences on its sleeves, closely resembling the One Million Dollar Homepage and Reddit Place. But despite its seemingly chaotic and almost too colorful presentation, the Satoshi’s Place is a Bitcoin-based advertising grid whose Lightning-powered heart consists of 100 blocks.

The cells are the center of attention and make up an artboard canvas with one million pixels offered to enthusiasts to paint for one satoshi per pixel, equivalent to a fraction of a USD cent.

A report by The Irish Times on June 11, 2018, suggested a 300 percent increase in the number of Irish citizens owning a cryptocurrency in 2018, compared to 2014 statistics.

The study suggested that over 120,000 citizens are officially holding bitcoins or altcoins, in addition to over 180,000 people who “have at some stage” purchased or used the pioneer cryptocurrency. Additionally, survey results indicated that public sentiment “is shifting from suspicion to curiosity.”

For the survey, conducted in May 2018, communications agency Red Flag and Dublin-based market analyst Amárach Research questioned over 1,000 people over the age of 16. The collaborative ascertained the efforts as “the first in a series” of studies evaluating fintech developments and digital assets.

The findings were evident to support the survey’s claim and noted that over 85 percent of Irish citizens recognized bitcoin, compared to less than 50 percent in an Amarach study in 2014.

A Quartz report on June 9, 2019, revealed significant insights on bitcoin’s usage in the tattered economy if the cited data from peer-to-peer exchange Localbitcoins is considered. As observed, citizens of Venezuela are increasingly using the digital asset in the wake of the government’s struggles to contain its extreme, world-leading inflation rate.

The government is devaluing the Bolivar by omitting three zeroes on August 4, 2018. However, the move has been deemed imprudent by financial authorities, who ascertain a further strain on the economy. Additionally, an International Monetary Fund (IMF) report expects consumer prices to surge to 14,000 percent in 2018. Notwithstanding the warnings, Venezuela’s banking industry continues to print the new denominations and update transacting systems.

Surprisingly, the government continues to support its state-backed cryptocurrency petro, even as the import of cryptocurrency miners are banned and no robust legislation on digital assets exist. But, after the government’s unfortunate handling of fiat money, it is unlikely that citizens trust the digital currency.

A cryptocurrency trader in Los Angeles who made at least $300,000 per annum under the name “Bitcoin Maven” is potentially facing a 30-month sentence in prison for operating an unregistered, illegal bitcoin-fiat exchange.

According to NBC, the “Bitcoin Maven” was identified as fifty-year-old Theresa Tetley, who had previously pleaded guilty in Los Angeles to a money exchange business that did not follow federal rules. The U.S. Attorney’s Office further stated Tetley conducted several suspicious financial transactions from 2014 to 2017, reportedly involving money from drug trafficking activities, using peer-to-peer service LocalBitcoins to facilitate her transactions.

The Attorney Office believes Tetley had exchanged from $6 million to $9.5 million while she was running the business.