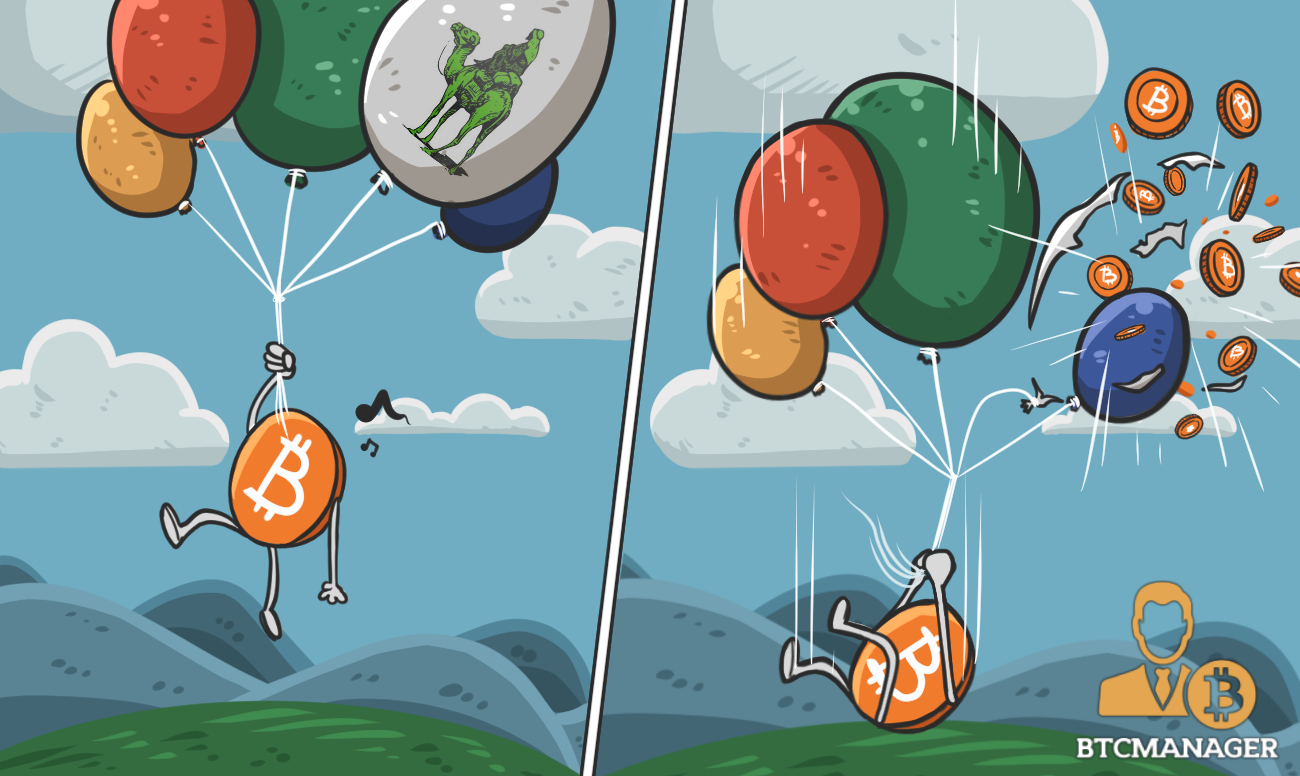 The price of bitcoin dropped by 12 percent week-on-week after a Silk Road-related wallet holding 111,114.615 BTC and BCH, among other forks, – worth over one billion dollars – moved coins for the first time in four years, which many took as a sign that the wallet holder was about to cash out.

Reddit user sicksilk, who discovered the whale’s bitcoin transfers, found that over $100 million worth of coins were moved to bitcoin exchanges Bitfinex, Binance, and BitMEX. This news caused sellers to take over the market, causing the price of bitcoin to drop to a new one-month low.

Several media outlets attributed this week’s drop in the crypto markets to Goldman Sachs abandoning its plans to trade cryptocurrencies. The entrance of institutional players in the cryptocurrency markets has been widely regarded as a potential driver of the next crypto bull run. Hence this news added to the selling pressure.

However, Goldman’s crypto trading abandonment was confirmed to be “fake news” by the bank’s CFO Martin Chavez. The market, however, did not recover after this was made public.

Bitcoin Cash dropped by over 23 percent, together with the rest of the altcoin market, which witnessed several coins and tokens hit their 2018 low.

BTCManager reported on September 6, 2018, that Goldman Sachs has reportedly called off its plans to establish a cryptocurrency trading desk.

The story didn’t prove to be encouraging news for global crypto tokens, as it was soon followed by a plunge in the digit currency markets. Bitcoins and altcoins alike took a harsh beating, as the market bled red on September 5, 2018.

Many pundits blamed the reported backpedaling of Goldman Sachs as the prime culprit for cryptos taking a downturn. However, now that Chavez has cleared the dust, concerns have popped up regarding the ease of manipulation of crypto markets. A market that can be manipulated by a speculative or unconfirmed story can hardly be called a healthy market.

“I was in New York yesterday and I was co-chairing our risk committee, and I saw the news article. It wasn’t like we announced anything or that anything had changed for us… I never thought I’d hear myself actually use this term, but I’d really have to describe that as fake news.”

Coinbase continues to make strides in what they can offer, thanks to new detail surrounding a potential Bitcoin ETF announced September 6, 2018. Coinbase has enlisted help from Blackrock, an asset manager that handles over $6 trillion, for this endeavor.

Coinbase made headlines earlier this year in regards to their index fund but is only accessible for accredited investors. Only users with a minimum annual salary of $200,000 or has a net worth exceeding $1 million (without housing) can participate in the weight index fund.

With a new Yale study claiming that all portfolios should have at 4-6 percent allocation in Bitcoin for optimal construction, an ETF would significantly make investor jobs a lot easier. Cryptocurrency has also been shown to have a negative correlation with traditional assets, which will benefit investors looking for as much

An ETF would allow a more mainstream audience to receive exposure, and the rush of new money would put tremendous upward pressure on the market. Users could begin placing crypto exposure into their 401k’s or IRA’s, which could help users tax shelter gains made.

Bitcoin Transactions Get a Charge from the Lightning Network

On September 5, 2018, the Lightning Network launched hoping to give Bitcoin adoption another charge. Lightning Network collaborated with payment processing startup CoinGate which is adding 4,000 merchants to the off-chain system.

The Lightning Network was incepted by Joseph Poon and Thaddeus Dryja in a 2015 whitepaper. The idea is that the creation of another layer atop the bitcoin blockchain allows transactions to be sent between the digital ledgers. This means quicker transaction speeds and a reduced cost to the entire network.

The Lightning network operates by allowing two parties to deposit funds at a single bitcoin address called a channel. This allows the two parties to exchange funds an unlimited number of times by utilizing both blockchain networks.

On September 4, 2018, Casa, the crypto startup assisting in securely storing digital currencies, has launched a new lightning node dubbed the Casa Lightning Node. As per their Medium blog, the company is accepting payments in bitcoin and credit cards for the devices.

The Lightning Ramp team that launched a system to connect exchanges to the Lighting Network, partnered with Casa team to scale lightning payments to the millions. According to Lightning Ramp CEO Michael Borglin, the lightning node device solves many problems concerning wide-scale adoption.

It does, however, also develop a new set of problems encircling key management. As such, Borglin believes that Casa’s team is a perfect fit due to their expertise in crucial personal management software.

“When we met the Casa team, we were surprised to find that they previously built (but did not release) a multi-chain personal device in Q3 2017. They learned that without better key management software, personal node devices are at risk of being attacked.

That’s why they focused 100 percent on building the best personal key manager on the planet first. By joining Casa, we combined our expertise in Lightning with their deep key management and security expertise,” the CEO said.

It’s also important to note that Casa’s Lightning device does not rely on the company’s servers. For users, it also means a minimal amount of coding, as not everybody working with blockchain technology is proficient in relevant computer languages.

With blockchain technology revolutionizing the way corporations handle data management, IBM announced the release of their Blockchain World Wire in July 2018. With this, the blue-chip firm offers yet another way how businesses can use the innovation to stay ahead of the competition.

Stellar Lumens’ blockchain technology is being leveraged in yet another partnership with IBM to achieve this feat. IBM isn’t the first company to partner with Stellar to help close the gap between countries, with a collaboration between TransferTo Ink and Stellar in July 2018 looking to achieve the same objective.

According to a ShapeShift blog post, the cryptocurrency trading platform is moving away from its “no user details required” model to an entirely new system that requires users to submit their details.

The ShapeShift Membership is crafted like a loyalty program that offers registered users benefits including higher trading limits, better pricing and more, according to users’ membership levels.

The CEO of ShapeShift, Erik Voorhees has made it clear that the change in the firm’s mode of operation stems from the feedback it has been receiving from users over the past year as well as factors like tokenization and becoming more regulatory compliant.

At a time when the activities of bad actors have led to a significant increase in regulatory oversight of the global cryptospace, with authorities making KYC/AML procedures compulsory for cryptocurrency trading platforms and exchanges, the ShapeShift change seems the right thing to do.

According to the International Business Times, Grant County’s Public Utility District announced Rate 17, a bill which increases the cost of electricity for “evolving industries” by 15 percent, effective April 1, 2019, by another 35 percent a year later, and finally, by 50 percent in 2021.

The bill was announced at a commision meeting held on August 28, 2018, when the Grant County PUD voted in the new rate to ensure its core customers (residents and small businesses) could continue enjoying below-cost power rates.

Capital Press, a Washington state weekly, said a unanimous vote has taken the decision and was preceded by a year-long study on the eventual impact the crypto mining industry might have on the Grant county power grid and prices.

“Your industry is unregulated and high-risk,” PUD Commissioner Tom Flint said at the meeting where some cryptocurrency miners showed up. “This is the best way to ensure this unregulated, high-risk business does not impact our ratepayers.”

The PUD has blamed this hike on heightened demand from miners, who have been putting an enormous strain on the local grid.

“I don’t view miners as villains,” Commissioner Larry Schaapman said at the same meeting. “You have likened yourselves to the data centers, but you can only do one thing — mine bitcoin.”