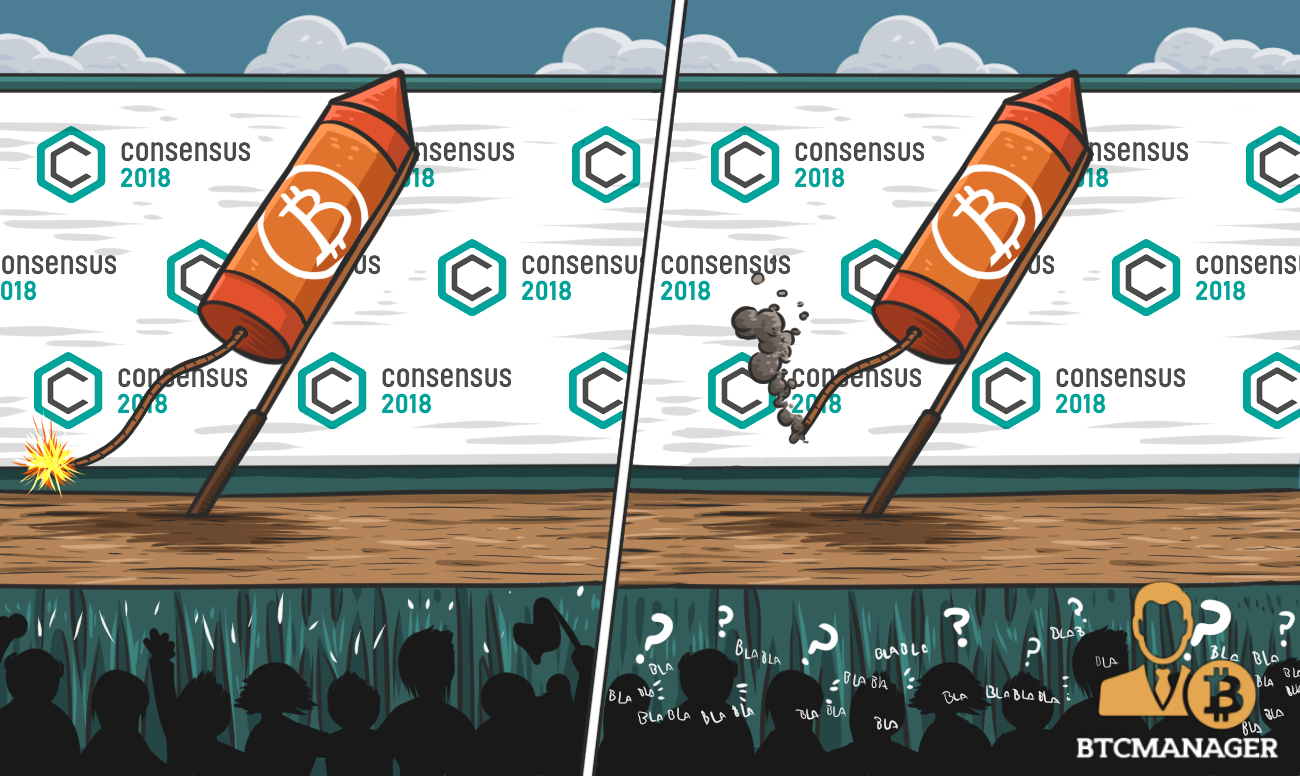 Consensus, the biggest annual bitcoin conference, was held in New York in the past week but failed to spark the expected bitcoin rally that financial commentators like Fundstrat’s chief analyst Tom Lee predicted. Instead, the price of bitcoin dropped after the conference concluded and remained mostly unchanged versus last week’s closing price.

Nonetheless, the takeaways from Consensus were more positive than negative for the future of cryptocurrencies.

US regulators present at the Consensus 2018 conference made it clear that they want to sanitize the cryptocurrency space by formulating policies that would protect investors and boost growth in the nascent digital currency ecosystem.

“The SEC has been open about meeting with people from the industry, to come in and meet with the staff, to talk about the ideas you have, the new developments, and have a dialogue about the new technology. The commission encourages ways to raise capital; we don’t regulate the technology – we regulate the financial industry and the markets.”

Positive news regarding cryptocurrency regulations also came out of Thailand, where ICOs have been legalized. Even in the European Union, where regulation is focusing on KYC/AML measures as opposed to curbing cryptocurrency-related activities, the French Finance Minister said that he wants to “make France the first place for blockchain & cryptocurrency innovation in Europe.”

Given that global cryptocurrency regulations have been cited as a major risk factor for asset valuations in 2018, investors will be happy to see more clarity coming for regulators around the world.

The EU has been at the forefront of creating a robust regulatory framework for the burgeoning crypto market with a lot of emphasis on Know your Customer (KYC) and Anti-Money Laundering (AML) regulations. On May 14, 2018, the EU agreed to a renewed drive at enforcing KYC and AML compliance in the crypto market.

According to the working group, robust KYC and AML regulations makes it difficult for criminal elements to use cryptos as a vehicle for perpetrating crimes or hiding the proceeds from the illicit activities. As a result, different segments of the market including exchange platforms and wallet providers must carry out the same identity verification processes as banks.

Vetting the identity of customers is also essential in the fight against terrorist organizations who might take advantage of anonymous cryptocurrency transactions to fund their nefarious activities. In fact, together with money laundering, terrorist funding is the primary worry of many governments in the crypto sphere.

According to Reuters, the Swiss Federal Council has solicited a report that states the perils and scope of developing a native cryptocurrency. They have reportedly decided to term it as “e-franc,” an amalgamation of electronic francs – Switzerland’s currency.

In the government’s words, the only difference between the e-franc and bitcoin would be that of being backed by the state as a legal tender opposed to being “privately-backed.” Regardless, the underlying technology shall remain that of a publically-viewable blockchain.

It now remains for the Swiss parliament’s lower house to take a call on whether to support the Federal Council’s request for a report on the topic.

The development comes after a warning issued by Switzerland’s Bank of International Settlement (BIS) in March 2018 which appealed central banks to strongly consider prospective risks involved with introducing their own cryptocurrency.

French Finance Minister is Seized by Sudden Passion For Cryptocurrency

Bruno Le Maire, France’s finance minister since May 2017, has publicly stated that he has obtained a renewed interest in the cryptocurrency sector and blockchain technology.

In an interview with Alex Stachtchenko, the co-founder of Blockchain Partner and La Chaintech, two blockchain associations based in France, Le Maire said: “I was a rookie a year ago, but now, I’ve been seized by a sudden passion. It took me a year. Let’s teach this knowledge to our fellow citizen to make France the first place for blockchain & cryptocurrency innovation in Europe.”

As BTCManager reported in April 2018, the French government officially declared cryptocurrency as movable property, decreasing the tax rate on cryptocurrency sales from 45 percent to 19 percent. That means, before April 26, when France’s Council of State officially modified the tax rate, the government charged 45 percent on the sale of bitcoin. Legally, the government had the right to chase after investors who have purchased bitcoin and request 45 a percent tax outright.

Perhaps due to the influence of Le Maire, the French government also announced that it had begun the development phase of various regulatory frameworks that will ease pressure placed upon cryptocurrency startups.

Bitcoin’s energy usage has long been a subject of criticism since the issues first came to light. But, most of the revelations are limited to anecdotal evidence or weakly researched primary reports, with future predictions based on such data. To combat the epistemic crisis, a recent peer-reviewed research paper breaks the unresearched monotony, and the evaluated results are nothing short of shocking.

Utilizing complex monetary models, de Vries combined his calculations with average power costs and publically available bitcoin mining data. His primary aim was to release a foundational study for the world’s organizations and individuals on which to base their Bitcoin studies.

As per de Vries, the lowest prerequisite wattage to run a mining rig in 2018 is 2.55 gigawatts, which equals the overall power demand of the world’s 118th largest nation, Ireland. Likewise, the researcher states that this sum is equivalent to half a percent of the world’s aggregate power use.

If Bitcoin mining goes on at the same rate, the report predicts its energy usage could measure up to that of the whole of Austria by the end of 2018, utilizing 7.7 gigawatts. Moreover, every Bitcoin transaction uses enough energy to power a home in the Netherlands for a month.

Back in February 2018, BTCManager reported that Thai authorities were on the verge of legalizing initial coin offerings (ICOs) in the Asian nation, in a manner that would encourage innovation, while protecting investors optimally.

“The SEC Thailand encourages access to funding for businesses, including high potential tech startups, and realizes the potential of ICO in answering startups’ funding needs. In cases where an ICO constitutes an offering of securities, the issuer will need to comply with applicable regulatory requirements under the SEC Thailand’s purview,” the SEC declared.

According to the Bangkok Post, the royal decree for the regulation of cryptocurrencies, a 100-section law, was published in the nation’s Royal Gazette on May 13, 2018.

As per the Bangkok Post, the latest regulation defines cryptocurrency as digital assets and digital tokens, as such, they must come under the purview of Thailand’s Security Exchange Commission (SEC). With this latest development, all crypto-related businesses are required to register with the SEC within 90 days or face legislative consequences.

Ripple’s Announces Launch of XRP Fund: Creates an Actual Use Case for Token

On May 14, 2018, Ripple announced Xpring, an initiative that would invest, incubate, acquire, campaign, and provide grants to blockchain and cryptocurrency firms. Under Xpring, selected entrepreneurs would utilize XRP, Ripple’s native token, and XRP ledger, an open-sourced and decentralized ledger, to build innovative products for solving customers’ problems.

Enumerating on their reason to launch Xpring, Ripple claims to have been approached by many entrepreneurs who sought technical support, due to the former’s understanding of the XRP ledger. Furthermore, Ripple added they are “among the few blockchain companies with traction to a non-speculative function,” hence well-equipped for the role of an incubator.

According to an official press release, the world’s largest futures operator said that it would provide “a daily benchmark price in U.S. dollars,” in addition to collating data (calculated by UK-based Crypto Facilities) from crypto-exchanges Kraken and Bitstamp to determine real-time prices. This data would be based on transactions and order book activity of the world’s second-largest digital currency by market cap.

The two launched indices are the CME CF-Dollar Reference Rate, which would close daily prices at 3 PM (UTC), and the CME CF Ether-Dollar Real-Time Index. UK-based exchange Crypto Facilities calculates the price of both indices. While the real-time value of ETH is already online on CME’s website, the necessary market data shall be processed starting June 4, 2018.

Speaking about the development, Tim McCourt, CME Group managing director and global head of equity products and alternative investments, said in a statement:

“The Ether Reference Rate and Real Time Index are designed to meet the evolving needs of this marketplace. Providing price transparency and a credible price reference source is a key development for users of Ethereum.”