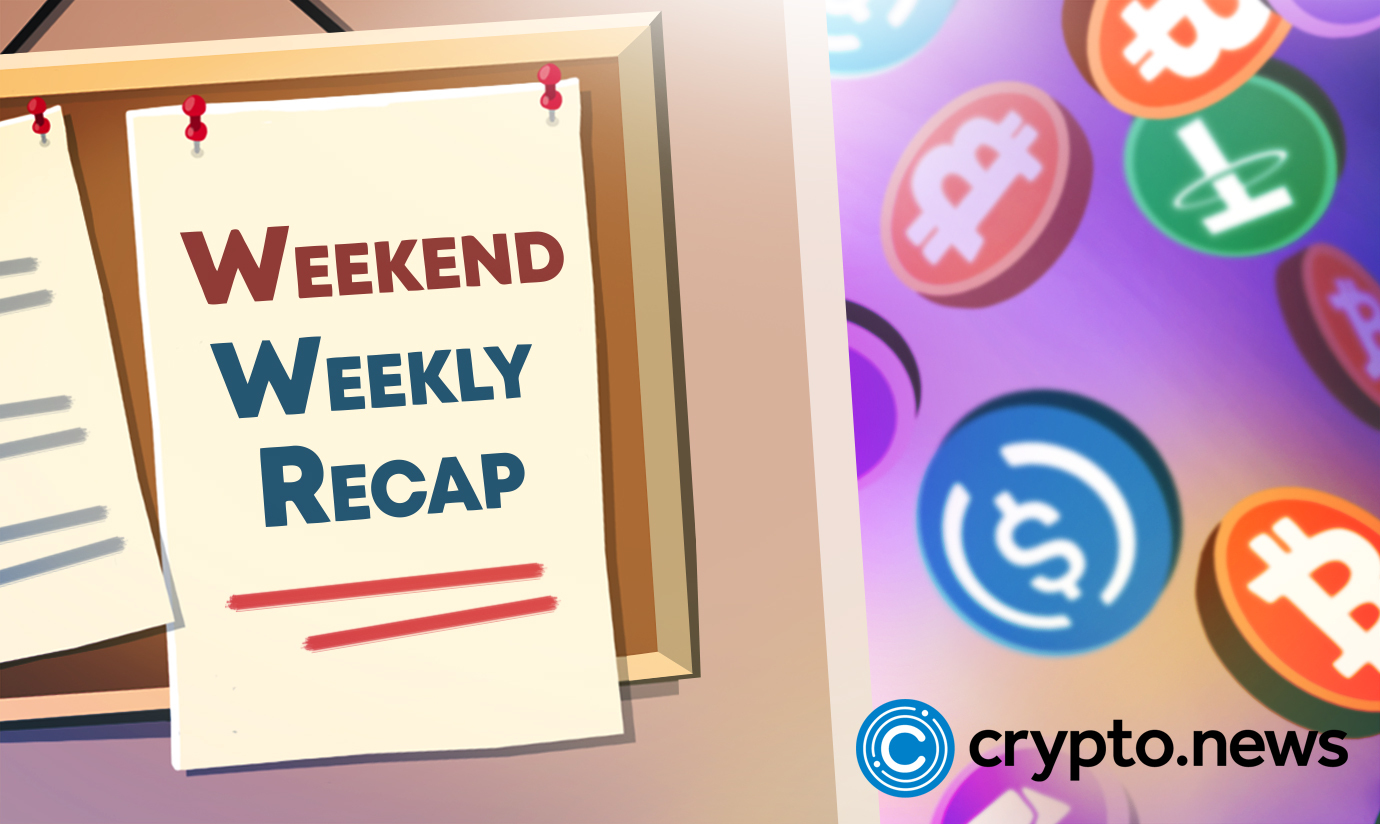 The past week was a rollercoaster for crypto enthusiasts. Binance is looking to expand despite a dearth of clear competition, as evidenced in its recent job openings and growth maneuvers as the FTX and SBF saga spill into the new year. Meanwhile, mixed sentiments have trailed the Ripple vs. SEC case, but the XRP camp is generally optimistic. At the same time, some crypto investors were welcomed into the new year with hacks and scams.

Binance, the world’s largest exchange by daily trade volume, is seeking to expand its reach in recent moves aimed at acquisitions and job openings. On Jan. 2, reports surfaced suggesting that Binance is looking to acquire a 41.2% stake in Gopax, South Korea’s fifth-largest exchange.

Binance will procure the stake from Gopax’s Chief Executive Lee Jun-haeng, the largest shareholder in the firm. Nonetheless, Binance plans to retain Jun-haeng as CEO to maintain a stable managerial structure. The exchange has done all due diligence, with the final steps currently in the works.

If the deal goes through, it will mark Binance’s second attempt at penetrating the South Korean market after it terminated its services in the East Asian nation two years back, citing reduced local usage and low trading volume with its Korean-won stablecoin (BKRW) pairs.

Amid these acquisition plans, Binance aims to expand its workforce, with 700 currently open positions despite the prevalent crypto Winter that has triggered multiple layoffs and forced bankruptcy filings. Seasoned journalist Jacob Silverman recently highlighted the openings, with the official Binance Twitter account notifying the public of a Social Media Manager role currently available as of Jan. 2.

Binance.US, the American partner of Binance, is also included in these expansion plans. Notwithstanding, the past week introduced fierce opposition to its journey for growth, as the U.S. SEC protested against its deal to acquire embattled lender Voyager.

The SEC filed an objection to the deal on Jan. 4, citing three reasons, including inadequate details on the company’s plan towards securing assets belonging to Voyager’s customers and a dearth of information regarding the mode of rebalancing Voyager’s crypto holdings.

Moreover, the financial watchdog is also not confident that Binance.US is financially capable of sealing a $1B deal. Binance.US plans to file a reviewed disclosure statement regarding the concerns raised. However, the SEC has asked the court not to accept any motions submitted by the exchange if they don’t address the three concerns.

Recall that Binance.US recently seized an opening to acquire Voyager’s assets valued at $1.022B following the FTX implosion. FTX had initially entered a deal to procure Voyager’s assets. However, the agreement was nullified in the wake of the ramp’s collapse.

The FTX saga spills into the new year

Two months after the FTX collapse, the drama surrounding the firm and its founder and former CEO Sam Bankman-Fried (SBF) persists, having spilled into the new year amid its bankruptcy proceedings. The saga has been further exacerbated by recent disclosures within the past week.

On Jan. 2, the Securities Commission of the Bahamas (SCB) issued a press release, accusing current FTX Chief John Ray and the Chapter 11 Debtors of circulating false claims which directly contradict its earlier estimation of the value of assets it seized from FTX.

The SCB had estimated these assets to be worth $3.5B, but Ray disputed this claim, alleging that the assets were worth $296M in FTT at the time of seizure. According to the financial agency, this is one of several false declarations made by Ray and the Chapter 11 Debtors in both court filings and the press.

Shortly after the SCB release, the U.S. Department of Justice (DoJ) seized $460M worth of Robinhood shares linked to FTX. FTX lawyer James Bromley disclosed the development on Jan. 4. SBF had previously contested ownership of the shares with crypto lender BlockFi.

FTX seized the spotlight again a few hours later, as Daniel Friedberg, a former top attorney for the firm, was reported to have been assisting U.S. regulators with important information on the bankrupt firm amid the legal case. Reports suggest Friedberg divulged information regarding FTX’s customer funds misappropriation to the authorities.

Meanwhile, on Jan. 4, up to 18 FTX clients filed an objection to the firm’s decision to liquidate four of its subsidiaries. The decision was made last month. Furthermore, the aggrieved individuals cited a move to sideline them in the procedure, as they demanded periodic up-to-date information on the proceedings, owing to their position as clients.

A day later, updates on the FTX saga revealed that the U.S.-based and Bahamian legal representatives behind the firm’s litigation had reached a consensus following a clash of opinions that ensued after FTX’s collapse. The agreement involved a decision to concurrently proceed with liquidation processes in the U.S. and the Bahamas on agreed grounds.

Meanwhile, amid the current issues faced by crypto lender Genesis and its parent company Digital Currency Group (DCG), disgraced 3AC founder Zhu Su came out on Jan. 3 to publicly accuse DCG and FTX of collaborating to facilitate the implosion of Terra in May. Recall that Zhu previously cited the Terra collapse as one of the major triggers of 3AC’s fall.

In addition to the woes surrounding FTX, SBF was personally caught up in some drama in the past week. Reports on Jan. 2 alleged that the former FTX Chief received 2 million raydium (RAY) shortly before FTX listed the token in 2021. While the whitepaper stipulated a 1-3 year lockup period for team/investors’ tokens, SBF indulged in trades on liquidity pools with which he amassed millions of dollars in ETH as profit.

Two days after these claims surfaced, the crypto community witnessed some suspicious on-chain activities involving SBF’s wallets, as 12 wallets allegedly linked to the FTX founder were found to have transferred up to $144K to several platforms, including Binance. Earlier this month, a wallet was found to have received some funds, leading to a balance of $30m.

Meanwhile, on Jan. 3, SBF requested that the court keep the identity of the two people serving as his bond guarantors private. According to a request made by his lawyers, making their IDs public is not necessary for the court proceedings and would introduce them to public harassment.

Later that day, reports emerged suggesting that SBF had pleaded not guilty to the charges brought on him by financial regulators. Recall that Caroline Ellison, SBF’s partner and former CEO of Alameda Research, had, in December, pleaded guilty to consciously deceiving investors regarding loans taken from FTX. SBF’s recent plea came shortly after he disclosed in an interview with Tiffany Fong that he has no plans to plead guilty.

The Ripple camp is optimistic

Besides Binance, FTX, and SBF, Ripple was at the center of several reports within the crypto space in the past week. The technology company’s age-old legal tussle with the U.S. SEC is nearing its terminus. XRP proponents anticipate a final ruling in Ripple’s favor. However, some believe the case will end in a settlement.

Garlinghouse’s remarks came a few days after crypto influencer Ben “BitBoy” Armstrong made a few forecasts for 2023, which several crypto enthusiasts would consider favorable. According to BitBoy, Ripple will likely win in the legal battle with the SEC this year, and SEC Chair Gary Gensler will be forced to resign.

Meanwhile, the litigation, which began with the SEC’s charges in December 2020, spilled into the new year, with the next court date scheduled for Jan. 9. Money transfer company MoneyGram requested, on Jan. 4, that the court seal part of the summary judgments in the ongoing lawsuit. MoneyGram noted that this is aimed at keeping information regarding company data and employee names private.

As the case draws closer to the end, the Ripple camp continues to face opposition from some individuals within the crypto community. Notably, since last month, self-acclaimed bitcoin creator Craig Wright has been in an ongoing verbal tussle with Ripple’s CTO, David Schwartz. In a recent incident, Schwartz took an equal swipe at Wright for his latest derogatory comments on XRP.

Hacks and scams riddle the scene

Amid all this, the crypto community entered the new year with mixed reactions, as hacks and scams riddled the scene at a time when several assets, including bitcoin (BTC) and ethereum (ETH), printed consecutive winning candles.

On New Year’s Day, Luke Dashjr, a notable Bitcoin Core developer, revealed that he had lost all his BTC, totaling 216.93 tokens, in an exploit that involved a compromised PGP key. Reactions trailed the development, as Binance Chief CZ offered his condolences and promised that Binance would assist with freezing the assets if it got a hold of them.

While the actual root cause of the exploit remained a debate amongst proponents, another hack occurred in the late hours of Jan. 3, involving a whale holder of the GMX token. The hacker drained 82,519 GMX ($3.4M) from the wallet, exchanging them for 2,627 ETH.

Following the GMX hack, reports surfaced on Jan. 5, revealing that the DoJ had arrested Aurelien Michel, a Mutant Ape Planet developer, on fraud charges. According to a DoJ release, Michel had defrauded investors of the Mutant Ape Planet NFT collection of a whopping $2.9M.