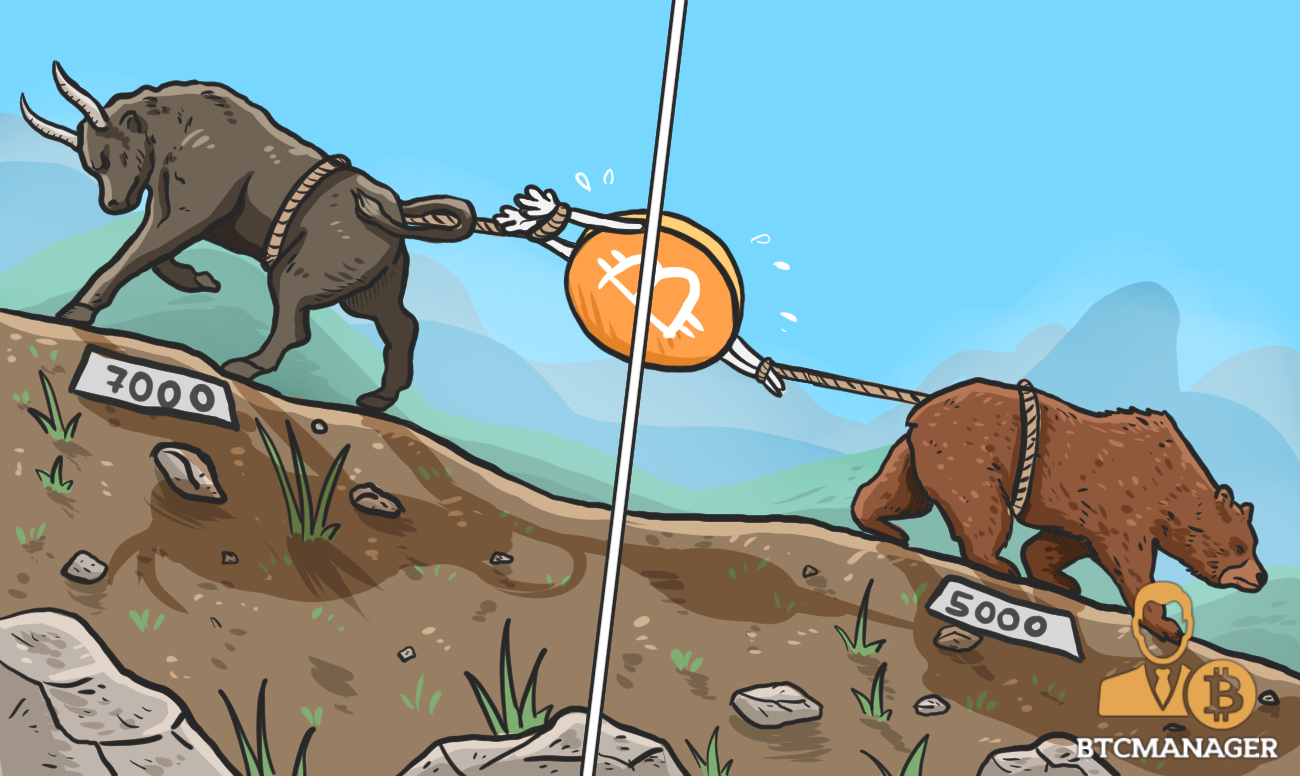 The price of bitcoin closed the week three percent higher, around the $6,500 mark, as bulls managed to regain the upper hand to allow bitcoin to remain above its most recent $6,000 resistance.

In the past seven days, blockchain media was filled with stories of regulators cracking down on fraudulent cryptocurrency business and their operators, which shows that authorities are taking the digital asset space seriously.

Fake mining company operator Joshua Garza was sentenced to 21 months in prison, while a United States judge determined that federal securities legislation can be applied in fraudulent cryptocurrency-linked investment schemes in a case against alleged ICO scams REcoin and Diamond.

Moreover, the UAE is reportedly close to classifying ICO tokens as financial securities in a much-anticipated cryptocurrency regulation framework which is being drafted.

This week’s activity by financial regulators across the globe acts as a testament that cryptographic assets are becoming a part of the global financial system but also that the future of digital assets will likely result in most crypto assets being classified as securities, especially tokens used in fundraising efforts.

Moreover, both Citigroup and Morgan Stanley are working on cryptocurrency-based financial products to benefit from the high investor interest for digital assets.

Ethereum, which has underperformed its peers in recent weeks, managed to rally by over seven percent to regain a price level above the $200 marker, while the remaining altcoin market experienced a mixed week.

According to a report by The Times of Malta, published on September 11, 2018, cryptocurrency exchange giant Binance has signed a memorandum of understanding (MoU) with the Malta Stock Exchange to launch a new digital platform for security tokens. The agreement was approved by the Malta Stock Exchange chairman Joe Portelli and Binance chief financial officer Wei Zhou.

The premier crypto exchange Binance and the Malta Stock Exchange’s digital asset subsidiary, MSX PLC, will collectively vie to achieve the global hotspot status for Malta when it comes to everything cryptocurrencies and blockchain technology. Binance CFO Wei Zhou said:

“This partnership will allow Binance and MSE to host traditional financial assets on blockchain technology through security tokens. We look forward to bringing more innovations to Malta and further establishing our presence here.”

The Association’s goal is to become the industry’s leading lobbying organization in Washington D.C., especially when it comes to policy issues concerning the industry.

Coinbase and Circle, two of the world’s largest cryptocurrency exchanges, have joined the Blockchain Association as founding members. On the investor end, there is also Polychain Capital and the Digital Currency Group as well as technology start-up company Protocol Labs.

A Texas man, formerly a citizen of Somer, has been sentenced to 21 months in prison for his involvement in a cryptocurrency Ponzi scheme worth $9 million. Homero Joshua Garza, the 33-year-old convict, will be put under three years of supervised release after his jail term ends. Garza will be spending the first six months of those three years in house arrest. Additionally, he will also be required to pay $9,182,000 in restitution.

U.S. District Judge Robert N. Chatigny in Hartford delivered the sentence on Sep 13, 2018, after the court found Garza guilty of operating four fraudulent crypto mining companies for nearly three years in between 2014 and 2016.

All four of these companies, GAW Miners, GAW, ZenCloud, and ZenMiner, dealt in mining rigs and cloud mining services before being seized by law enforcement authorities. In addition to the mining operations, Garza also used these companies to sell a pair of virtual currencies called PayCoin and Hashlets.

The Japanese financial regulatory body is contemplating an expansion of its team focused on cryptocurrency and related activities. Observing the growing interest of Japanese companies in establishing a digital currency exchange, The Financial Services Agency (FSA) is set to bring more breadth to its team in 2019, per a Reuters report dated September 12, 2018.

Kiyotaka Sasaki, vice commissioner for policy coordination at the FSA, stated that the premier financial watchdog currently has 30 people responsible for the complete supervision of crypto-related activities, including license registration reviews.

According to the Reuters Japan report, the FSA is planning to add 12 more individuals for the year 2019, a response to the rapidly growing exchange industry in the land of the rising sun.

Sasaki revealed in the report that the objective of such an expansion is to “strengthen the response to virtual currency exchange operators.”

In what has been tagged a first-of-its-kind ruling, a United States Judge has declared that the country’s federal securities legislation can be employed in prosecuting organizers of fraudulent cryptocurrency-linked investment schemes, reported Reuters on September 11, 2018.

Per the report, United States District Judge Raymond Dearie has made it clear in his ruling against the founders of REcoin Group Foundation and Diamond Reserve Club (DRC) initial coin offerings (ICOs), that the federal securities law could be interpreted “flexibly” to support the prosecution of bad actors who launch bogus crypto-based investment schemes and fundraisers.

On September 29, 2017, the SEC filed a complaint in a federal district court in Brooklyn, against Maksim Zaslavskiy and his companies for selling unregistered securities they claimed were backed by real estate and diamonds, promising participants outrageous returns on investment whereas the digital assets being peddled were nonexistent.

ICO-Generated Tokens to Be Classified as Securities in the UAE

The Securities and Commodities Authority (SCA) of the UAE is set to formulate a robust regulatory framework for all things initial coin offerings (ICOs), cryptoassets exchanges, and all other crypto-related businesses.

Per a Finance Magnates report, the regulatory watchdog has hinted that ICO-generated tokens would be classified as securities and regulated as such.

The guidelines which will come into effect shortly would put into consideration the issuance cycle of the crypto-based fundraisers including the private presale event, the public sale, and the entities eligible to make the token issuance and the legislative requirements.

The guidelines would also clearly outline other legislative requirements including, among other things, “registration and fees, the Blockchain operators, the targeted entities by issue type, the minimum content of the whitepaper, liability thereof, and whether registration is or is not required by the fundraiser.”

An anonymous source revealed on September 13, 2018, that Morgan Stanley will soon launch a Bitcoin derivative available to institutional investors. Interested parties will have actionable “synthetic exposure” to the leading cryptocurrency’s market movements. The announcement ties neatly into the recent news of Citigroup’s digital asset receipts and Goldman Sach’s non-deliverable forwards.

As per Bloomberg, the sizeable American bank will develop a complex derivative product based on Bitcoin’s performance. Investors eager to join the market, but unsure or averse to risk, will now be able to short and long the crypto market’s favorite token. Morgan Stanley will reportedly turn a profit on the “spread of each transaction,” according to the report.

While the information has been neither confirmed nor denied by the firm, the anonymous source explained that the bank is equipped to begin trading pending institutional demand. The push also awaits an internal approval regime.

The source explained that the derivatives will be tied to Bitcoin futures contracts and that Morgan Stanley will not be holding any actual cryptocurrency. The synthetic exposure granted to trading agents will be helped along by the banks work to clear futures from both CME and CBOE. This September announcement now places them neck and neck with many other wall street financial groups.