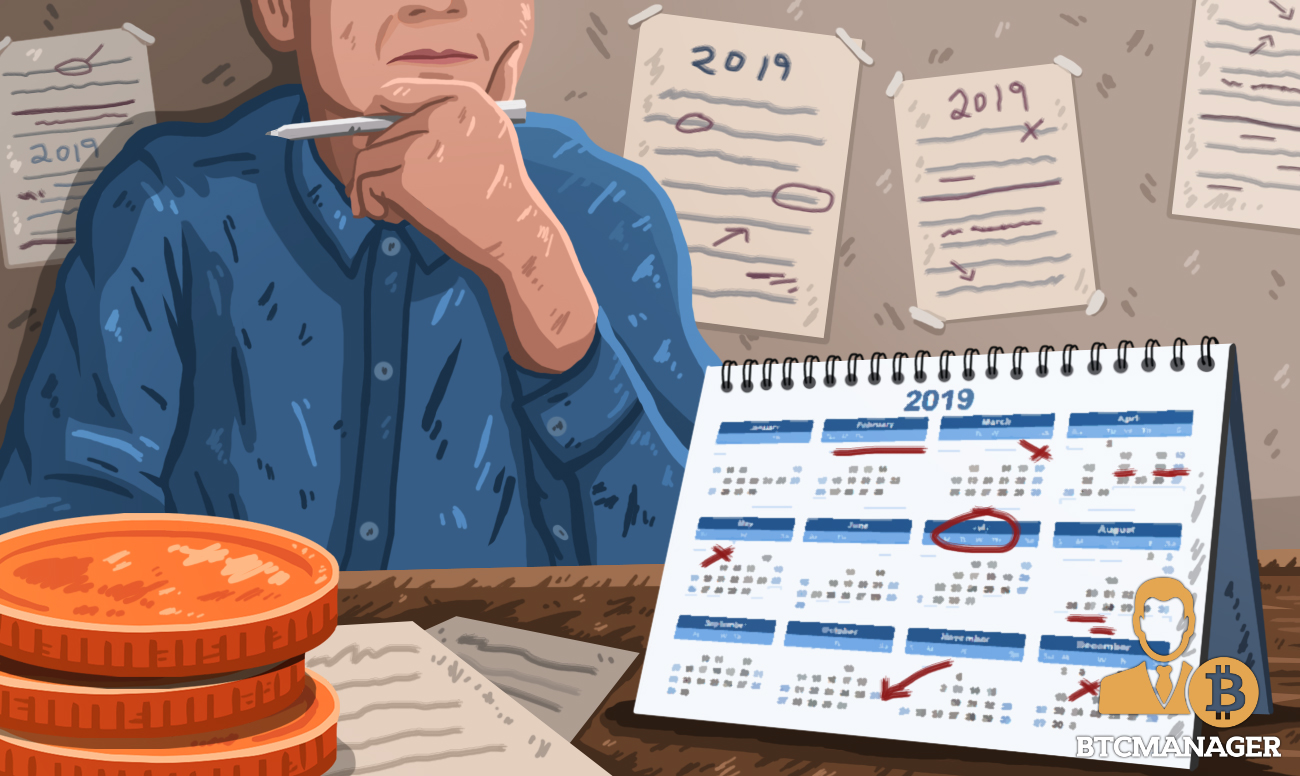 The year 2018 has arguably been one the most volatile for the crypto community. While bitcoin and altcoins enjoyed a total market cap of more than $800 billion in January 2018, the figure hovers around $130 billion at year’s end.

When observed, there was nothing significant in 2018 which stood out as being a detriment for the industry. There was no “Mt. Gox 2.0,” nor was there any significant arrest akin to Charlie Shrem in the yesteryears. Yet, the numbers don’t convey the same story.

The price of the pioneer cryptocurrency has fallen by more than 80 percent from its all-time-highs. The unchecked ICO frenzy during late 2017, which led to the boom of an array of promising projects, is barely a topic of discussion in the cryptoverse today. The novel funding model may have even been overshadowed by their less volatile and more sophisticated cousins STOs.

Conversely, 2018 witnessed unprecedented interest from the Wall Street giants, who had previously maintained a safe distance from the byproduct of the 2008 financial crisis. The technology behind the premier cryptocurrency was lauded and criticized by world-renowned economists and pundits. Regulations the world over took different forms to suppress and encourage the local crypto ecosystem.

As the year nears its end, the nascent industry looks as resilient as ever.

Doing away with the notorious volatility characteristic of traditional cryptocurrencies like bitcoin, ether, and litecoin, stablecoins display a far more anchored behavior concerning price movements. It’s not unusual to see the price of cryptocurrencies swing by five to ten percent in a single day; something that has proved to be one of the chinks in the armor for the emerging asset class.

On the other hand, stablecoins are usually pegged to real-world assets like the U.S. Dollar, gold, the Japanese yen, and many others. This ensures that the price of the asset doesn’t go up or down dramatically. In a nutshell, stablecoins take the best of both the worlds in that they harness the benefit of cryptos, a secure digital transfer of value, coupled with the stability and trust in mainstream currencies.

Some of the most popular stablecoin projects in existence today include Tether (USDT), Circle’s USDC, and Gemini’s GUSD. The innovation helps in creating liquidity for cryptocurrency exchanges, as the majority of the trading platforms usually allow trading cryptocurrencies in pairs with stablecoins.

Proponents of the new breed of digital currency claim that stablecoins can also be used for more advanced and complex purposes, including smart contracts, insurance, and other applications.

Although this new class of cryptocurrency has received its own share of flak in recent times, it will be interesting to see what 2019 has in store for them. Especially considering that industry thought leaders have already dubbed 2019 as the year of the stablecoin.

Although Satoshi Nakamoto had visions of razing down the grasp of Wall Street players on the modern financial system, the pseudonymous creator of bitcoin would not be too thrilled to see the current level of interest from institutional investors in the ten-year-old digital currency.

Companies that initially dismissed bitcoin as a Ponzi scheme and tulip mania 2.0 are steadily embracing the brainchild of Nakamoto. The year saw Intercontinental Exchange announce their physical Bitcoin contracts trading platform Bakkt, which is scheduled to go live in January 2019. What separates Bakkt from other bitcoin futures trading platforms (CME, CBOE), is that the former will settle contracts with physical bitcoin instead of cash.

Further, on October 17, 2018, Fidelity Investments announced their foray into the world of cryptocurrencies. The Wall Street giant which boasts an AuM of more than $7.2 trillion, is primed to launch Fidelity Digital Asset Services in Q1 2019, a cryptocurrency custody and trading platform catering to institutional investors.

On November 28, 2018, reports emerged that stock market heavyweight Nasdaq is also heading towards the newly christened industry. The operator of the world’s second-largest stock exchange has partnered with the staunch bitcoin ETF proponent VanEck to provide a “regulated crypto 2.0 futures-type contract” to investors as early as Q1 2019.

On a more recent note, VC arms of Nasdaq and Fidelity Investments threw their weight behind ErisX, an upcoming cryptocurrency exchange platform scheduled to go live from Q2 2019. The yet-to-be-launched exchange will provide users the opportunity to trade major cryptocurrencies like bitcoin (BTC), ether (ETH), and litecoin (LTC) on futures and spot markets.

Seeing the aforementioned flurry of developments and increasing level of interest from institutional investors, it won’t be surprising if 2019 is remembered as the breakout year for cryptocurrencies in the formal finance arena.

Cryptocurrencies find their grassroots in ideologies demanding power return to the hands of the people. After the housing bubble burst in the U.S. in 2008, people were forced to think twice before lending their hard-earned money to banks and financial institutions.

It comes as no surprise that digital currencies have found their footing in countries experiencing dramatic economic conditions partly due to the autocratic facet of the ruling government.

Countries like Turkey and Venezuela are prime examples of this. One of the best utilities of cryptocurrencies is bypassing censorship. This didn’t bode too well with countries like China, which has virtually crushed the local cryptocurrency ecosystem.

However, 2018 was not all gloomy when it came to government regulations. One of the brightest glimmers of hope for the industry came from Japan. On October 25, 2018, the country’s financial watchdog, the Financial Services Agency (FSA) granted self-regulatory status to the burgeoning digital assets sector.

Similarly, on July 9, 2018, reports made rounds claiming that South Korea was mulling over the creation of cryptocurrency regulations in line with G20 ideals. South Korea has emerged as one of the global hotbeds for everything cryptocurrency, and a move towards regulating the infant industry will no doubt aid the development of the ecosystem.

With regard to the world’s largest economy, the U.S. found itself amidst many controversies when the SEC declined applications seeking the establishment of a bitcoin ETF. While the fate of a crypto ETF still lies in the doldrums, positive developments towards the end of 2018 have given the crypto community something to look forward to in 2019.

On December 6, 2018, U.S. Republican named Warren Davidson announced a plan to introduce new regulations for the cryptocurrency and ICO industry. The legitimacy of bitcoin as a store of value touched new heights in November 2018, when the U.S. state of Ohio passed a law to enable people to pay their taxes via the cryptocurrency. With this directive, Ohio became the first state in the country to allow the payment of taxes with BTC.

As an icing on the cake, on December 24, two members of the U.S. Congress proposed a House bill which seeks to exclude cryptocurrencies from the definition of traditional securities.

What 2019 brings for the industry still trying to find its footing remains to be seen. Continual ups and downs have resulted in countless deaths of bitcoin in recent times, but none of them seem to have put the final nail in the coffin.

2018 will undoubtedly be regarded as one of the most critical years for the industry regarding regulations, investments, and acceptability. Here’s to hoping the future extends this positive narrative.